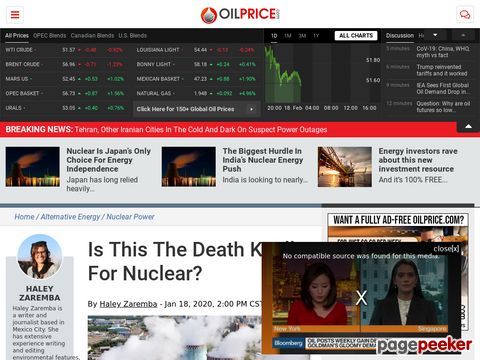 Source : Is This The Death Knell For Nuclear? https://oilprice.com/Alternative-Energy/Nuclear-Power/Is-This-The-Death-Knell-For-Nuclear.html

It’s nearly impossible to discuss climate change and the future of the energy industry without discussing nuclear energy. Nuclear energy produces zero carbon emissions, it’s ultra-efficient, it’s already in widespread use, and could be scaled up to meet much more of our global energy needs with relative ease, but it is, and will likely always be, an extremely divisive solution.

For all its virtues, nuclear energy certainly has its fair share of drawbacks. It may not emit greenhouse gases, but what it does produce is deadly nuclear waste that remains radioactive for up to millions of years and we still don’t really know what to do with it other than hold onto it in ever-growing storage spaces. And then there are the horror stories that keep civilians and politicians alike wary if not outright antagonistic toward the technology. Chernobyl, Fukushima, and Three Mile Island loom large in our collective doomsday consciousness, and not without good reason.

We’re still dealing with the aftermath of these nuclear disasters. Japan is in many ways still reeling from 2011’s Fukushima nuclear disaster and recently even threatened to throw radioactive water into the Pacific Ocean or letting it evaporate into the air because they are running out of storage space for the wastewater they have been using to keep the damaged Fukushima reactors from overheating again. So yeah, nuclear isn’t perfect.

Because of all of these reasons, as well as financial burden, nuclear energy has been on the decline in much of the world (with some notable exceptions in the nuclear-friendly administrations in China and Russia). This is not new news. Now, however, Chatham House, the UK’s Royal Institution of International Affairs, has taken things a step further by taking the official stance that nuclear will never be a serious contender as a solution to catastrophic climate change.

As paraphrased by environmental news site EcoWatch, the energy experts at Chatham House “agreed that despite continued enthusiasm from the industry, and from some politicians, the number of nuclear power stations under construction worldwide would not be enough to replace those closing down.” The consensus was that this is nuclear’s swan song, and we are now unequivocally entering the era of wind and solar power.

These conclusions were arrived at during a summit convened to discuss the findings of the World Nuclear Industry Status Report 2019, which concluded that “money spent on building and running nuclear power stations was diverting cash away from much better ways of tackling climate change.”

This echoes the sentiment of many other climate and energy experts, who have long been sounding the alarm bells that renewable energy is not being built up or invested in with nearly enough urgency. Last year the International Energy Agency announced that renewables growth has slumped, and that our current renewable growth rate of 18o GW of added renewable capacity per year is “only around 60 percent of the net additions needed each year to meet long-term climate goals”.

The International Renewable Energy Agency (Irena) did the math, calculating exactly how much renewable energy will need to be installed by 2030 if the world has any hope of meeting the goals set by the Paris climate agreement, and they found that “7.7TW of operational renewable capacity will be needed by 2030 if the world is to limit global warming to ‘well below’ 2C above pre-industrial levels, in line with the Paris Climate Agreement,” according to reporting by Wind Power Monthly. “However, at present, countries’ nationally determined contributions (NDCs) amount to 3.2TW of renewable installations by 2030, up from 2.3TW currently deployed.”

The World Nuclear Industry Status Report succinctly sums up the situation while sounding the death knell for nuclear: “Stabilising the climate is urgent, nuclear power is slow. It meets no technical or operational need that these low-carbon competitors cannot meet better, cheaper, and faster.”

By Haley Zaremba for Oilprice.com

Yahoo Finance (US): Is This The Death Knell For Nuclear?