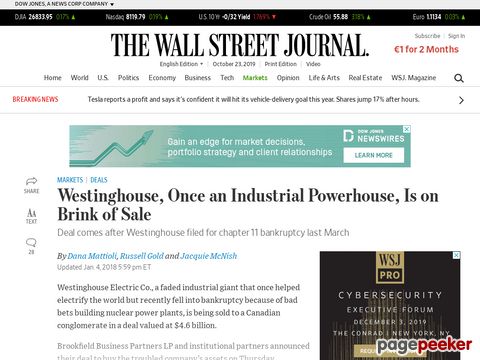 Source : Westinghouse, Once an Industrial Powerhouse, Is on Brink of Sale https://www.wsj.com/articles/brookfield-business-partners-to-acquire-westinghouse-for-4-6-billion-1515075664

Westinghouse Electric Co., a faded industrial giant that once helped electrify the world but recently fell into bankruptcy because of bad bets building nuclear power plants, is being sold to a Canadian conglomerate in a deal valued at $4.6 billion.

The acquisition marks Brookfield’s entry into the nuclear power business, though it may not mean the company has any future in nuclear power-plant construction. One person familiar with the transaction said Brookfield wasn’t interested in building plants, rather it seeks to expand into servicing existing nuclear facilities and decommissioning aging plants.

Westinghouse’s attempt to design and build a new generation of nuclear power plants proved disastrous, plunging it into bankruptcy amid massive cost overruns. But it retains a potentially lucrative business in producing nuclear fuel as well as servicing and decommissioning the world’s 400 existing reactors.

“This is a huge and very safe business,” says Mycle Schneider, a Paris-based independent consultant to the nuclear industry.

The company, owned by Toshiba Corp., reported in bankruptcy filings early last year that these business segments generated $3.13 billion in revenue and $403 million in earnings before interest, taxes and depreciation and amortization, or Ebitda, in the company’s 2015 fiscal year.

Westinghouse was founded in 1886 by George Westinghouse in a successful bid to promote alternating current electricity over Thomas Edison’s favored direct current. It was once one of the most iconic brands in the U.S., with an industrial portfolio rivaling General Electric Co. The Pittsburgh-based branched out into radio broadcasting in the 1920s and designed and built the world’s first commercial nuclear power plant in the 1950s.

By 1998, the nuclear business—and with it the Westinghouse Electric name—was sold to a British company, which later sold it to Toshiba in 2006 for $5.4 billion as the Japanese tech giant looked to grow in the American nuclear market.

Westinghouse bet its future on a new nuclear design called the AP1000 that was intended to be easier to build and safer to operate than older generations of reactors. It struck deals with utilities in South Carolina and Georgia to build the first of its new reactors in the U.S. But building the reactors turned out to be much more difficult than anticipated. Costs skyrocketed and schedules slipped by years. Westinghouse was responsible for the cost overruns, forcing it into bankruptcy and nearly dragging down Toshiba as well.

The future of nuclear construction looks dire for Westinghouse and its competitors. Power companies are moving toward smaller power generators, such as wind farms and plants fueled by natural gas, that can be brought online more quickly than nukes. China, once seen as the most promising market, appears to be losing its appetite for large nuclear facilities.

“Not a single commercial Chinese reactor went under construction last year,” says Mr. Schneider. “Not a single one. None. At the same time, China connected to the grid over 50 gigawatts of solar alone.”

Brookfield Business Partners is the publicly traded arm of Toronto-based Brookfield Asset Management Inc., which owns a variety of interests including one of the world’s largest portfolios of office properties, including London’s Canary Wharf.

The company was drawn to Westinghouse’s power engineering, maintenance and service expertise, according to a person familiar with the matter. Brookfield Business owns a mix of energy, construction, transportation and industrial companies including Teekay Offshore LP, an offshore oil shipping and services company.

Brookfield Business reported total assets of $15.9 billion in the third quarter of 2017. It reported earnings before interest, appreciation, taxes, depreciation and amortization of $85 million in the quarter.

The company said the deal would be funded with $1 billion of stock and $3 billion raised through debt financing, and that the $4.6 billion price includes the assumption of pension, environmental and other obligations.

The deal, expected to close in the third quarter, is the second buyout announced this week of a nuclear-related company. On Wednesday Dominion Energy Inc. said it would buy Scana Corp. for over $7 billion and help the South Carolina energy company refund customers for some of the construction costs of its failed nuclear projects. Westinghouse Electric was the designer and contractor for the projects.

—Imani Moise contribute to this article.

Write to Dana Mattioli at dana.mattioli@wsj.com, Russell Gold at russell.gold@wsj.com and Jacquie McNish at Jacquie.McNish@wsj.com