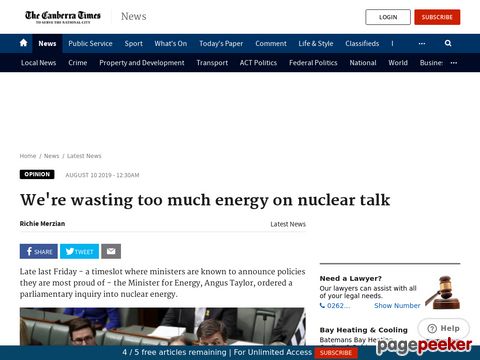 Source : We’re wasting too much energy on nuclear talk https://www.canberratimes.com.au/story/6320212/were-wasting-too-much-energy-on-nuclear-talk

Late last Friday - a timeslot where ministers are known to announce policies they are most proud of - the Minister for Energy, Angus Taylor, ordered a parliamentary inquiry into nuclear energy.

In a country currently engulfed in a gas price crisis, caused by the voracious appetite of the gas industry to export cheap gas and sell Australians expensive gas, are we really willing to believe that the solution to expensive gas is even more expensive energy from nuclear reactors? While renewables keep coming down in price, nuclear is only the energy source that keeps getting more, and more, expensive over time.

And if policymakers are trying to solve an energy crisis in 2019, why would they select a form of power generation that has a legacy of expensive delays and failures and, optimistically, takes a decade to build? It just doesn’t add up. Globally, reactors have taken decades. Of all nuclear reactors currently under construction, two-thirds are behind schedule and nearly half of those were delayed again in the last year.

In developed countries, even ones with existing nuclear industries, nuclear is a far more expensive form of electricity than any other alternative, according to numerous organisations (Lazard, the International Energy Agency, and Bloomberg - just to name a few). The independent World Nuclear Industry Status Report puts it even more bluntly and states that new nuclear energy ’is simply not competitive under ordinary market economy rules anywhere’. Yes - anywhere. What makes nuclear a particularly poor choice for Australia is that we would be building nuclear where there isn’t any nuclear to begin with.

To ’go nuclear’, Australia would have to start from scratch. Moratoriums would need to be lifted, and legislation would need to be drafted (and passed) to regulate the mining, enrichment, energy, transportation and storage phases of nuclear energy. Taxpayers will pay to set up the industry and end up subsidising reactors. In contrast, wind and solar generation keep getting cheaper. The CSIRO and Australian Energy Market Operator crunched the numbers last year and found nuclear energy would be far more expensive than current renewables with storage, which will only keep getting cheaper.

Even the Australian Nuclear Association admitted nuclear needs a carbon price to be competitive in Australia. Let that sink in. The Coalition boosters of nuclear energy are the same party which removed the one mechanism that could have made it anywhere near price competitive - talk about shooting yourself in the foot. But while you’re soaking in that irony, also realise that any carbon price which benefited nuclear power in Australia would provide just as much, if not more, benefit to renewable energy.

The cost of renewable energy is falling as fast today as the cost of computers fell a decade ago. As demand for renewables increases so too does the rate of innovation. Meanwhile, the exact opposite has happened with nuclear. In the US and France, where nearly half of nuclear power stations are located, the cost of building nuclear power stations has steadily increased. Major companies like Westinghouse Electric Company, who pinned their hopes to nuclear, have gone bankrupt and projects have been scrapped at enormous expense. France, and a range of other nuclear countries, are reducing their nuclear fleet.

“We would be building nuclear where there isn’t any nuclear to begin with.”

And while nuclear boosters will be pointing to the growth in nuclear in China, it’s funny that these same people are far less likely to point out that renewable energy in China has increased twice as fast, and now produces double the energy nuclear generates. It is no coincidence that global demand for nuclear energy has slowed and nuclear energy has dropped from 17 per cent to 10 per cent as a proportion of the global energy mix in the last 20 years. Those who argue on the side of nuclear generally point to “small modular reactors” as the economical solution. Taylor specifically listed these mini-reactors as a new technology worth exploration.

On the surface, the economics of these mini-reactors sound plausible - they’d be smaller and mass produced in factory, and mass production leads to lower prices. But even the most cursory interrogation shows just how ridiculous these claims are. These mini-reactors would be made in new mega-factories that don’t exist - so you still have to build something large, expensive and complicated to have mini-reactors. The small number of mini-reactors that are under construction have seen delays and cost blowouts.

Secondly, for mass production to work you need customers. How many mini-reactors would Australia be willing to buy and where would we put them? If you think there’s not enough controversy over where one large nuclear reactor could be located, just wait until the government tries to dot mini nuclear reactors around the country. On top of all of that, each mini-reactor requires much of the same control technology as the large reactors, and are generally less efficient.

The costs of nuclear reactors are so high due to the safety requirements needed to avoid catastrophic situations like those in Chernobyl and Fukushima, and because meeting these requirements lead to multi-year construction blow outs. Even so the risks associated to nuclear power stations mean they are essentially uninsurable. If the operators did have to insure against the full risk of nuclear accidents, the premiums would make the cost of nuclear power prohibitively uncompetitive.

So, the government makes up the gap - with taxpayer dollars - as the insurer of last resort. So why is Taylor, whose primary mandate is to bring energy prices down, requesting an inquiry into literally one of the most expensive energy generation technologies? Could this be a distraction from the government’s complete and utter lack of energy and climate policy?

As the Prime Minister flies to the Pacific Island Forum on Tuesday, he will now be armed with another sorry excuse as to why Australia is not expediting the transition to renewables and storage: ’Sorry, we are still looking into nuclear’. But in the end, whatever is sparking this debate is less important than the economic and safety risks of nuclear. You don’t need to be an economist to see that nuclear power is an expensive and dated solution.

Richie Merzian is climate and energy program director at the Australia Institute.

The Australia Institute (Australia), “We’re wasting too much energy on nuclear talk”, 14 August 2019