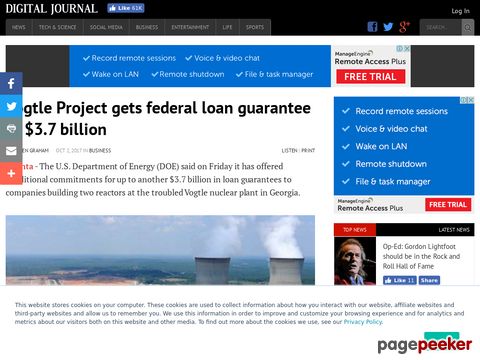 Atlanta - The U.S. Department of Energy (DOE) said on Friday it has offered conditional commitments for up to another $3.7 billion in loan guarantees to companies building two reactors at the troubled Vogtle nuclear plant in Georgia.

Georgia Power, a subsidiary of Southern Company, is the chief owner of the Vogtle project, with a 47 percent interest. The other co-owners include Oglethorpe Power, Municipal Electric Authority of Georgia (MEAG) Power, and Dalton Utilities.

The previous loan guarantees given out by the DOE included $6.5 billion to Georgia Power and Oglethorpe Power in 2014 and an additional support of $1.8 billion in 2015.

The expansion of the Vogtle nuclear power plant near Augusta is already three years behind schedule and billions of dollars over budget. Vogtle’s two new nuclear reactors were initially scheduled to have been up and running in April this year, however, with the bankruptcy of main contractor, Westinghouse, Georgia Power announced they were suspending the project.

The whole sordid story of the trouble-ridden Vogtle project also includes Toshiba Corporation’s attempts to recover from an accounting scandal where they padded their reported profits by about $1.7 billion over the course of seven years in March 2017.

Added to Toshiba’s problems was the fact that they had signaled to investors in January its subsidiary, the Cranberry-based Westinghouse Electric Company would be getting out of the business of building nuclear reactors. Instead, Westinghouse ended up filing for bankruptcy.

But the world can’t put all the blame on Toshiba’s business woes for the downturn in the nuclear industry. The industry’s problems were summarized in the World Nuclear Industry Status Report 2017:

And adding to the story is the DOE’s proposal to provide federal subsidies for coal-fired and nuclear power plants as on Monday. In a letter to federal regulators, Rick Perry asks that action be taken within 60 days that would financially prop up “fuel-secure resources,” which must have “a 90-day fuel supply on-site enabling [them] to operate during an emergency, extreme weather conditions, or a natural or man-made disaster.”

With Georgia Power’s decision to complete the Vogtle project, the Georgia nuclear power plant will be the only project which is under construction in the United States. According to Nasdaq, the Georgia Public Service Commission is soon to complete the review process and take a final call regarding the expansion of the Vogtle project in February 2018.