Southern Co. project is only one of its type in U.S., and could cost $2 billion more than expected 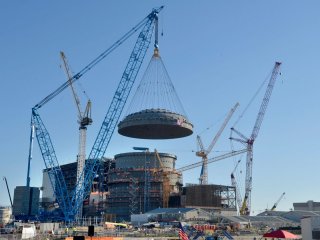 The only nuclear-power plant under construction in the U.S. is facing delays and additional costs. Again.

Earlier this week, an engineering expert working for the Georgia Public Service Commission testified that the startup of the Alvin W. Vogtle Electric Generating Plant would likely be delayed until the summer of 2022 and could cost $2 billion more than expected.

Southern Co. SO -0.05% ▼, the Atlanta-based utility building the nuclear-power plant, said it expects the first reactor to be completed during the first quarter of 2022. A spokesman for the company said its judgment was based on current information and that “risks remain on the project and it is possible that the cost estimate could increase in the future.”

Any delays after November 2021 would result in a reduction in the regulated profit that Southern subsidiary Georgia Power receives for building the nuclear reactor.

Vogtle has been beset by numerous delays and cost overruns. It was originally scheduled to open in 2016, and the total cost of the two planned Vogtle reactors tops $27 billion—more than double the initial estimates approved by state regulators in 2008.

The problems finishing Vogtle have lessened enthusiasm for what was hailed a decade ago as a possible nuclear renaissance in the U.S. Today, the facility located near Augusta, Ga., highlights the financial and industrial difficulty of building a nuclear-power plant in a country that hasn’t completed a new one in three decades.

Georgia almost gave up on the project amid cost overruns and delays. In 2017, state officials voted to continue building the reactors, but limited Southern’s future returns on the project if further postponements occurred. At the time, Southern promised that a new contractor would resolve construction delays. The utility later took a charge to its earnings and promised to have the first of two new reactors completed and generating electricity by November 2021.

“They will be late and they will pay a penalty,” said Tim Echols, vice chairman of the Georgia Public Service Commission. “They were willing to negotiate then because they thought they would be on time. I think they are regretting it today.”

Over the past couple of years, work has progressed on the reactors. Southern is running what is known as a hot test to make sure everything is working properly at the plant before nuclear fuel is added.

In a filing Monday with the Georgia Public Service Commission, project monitor Donald Grace said he expects the plant’s startup to be pushed back “by roughly seven to nine months, or more.” Mr. Grace, the vice president of engineering at the Vogtle Monitoring Group, which was retained by the commission’s public-interest staff, also said the plant’s costs could increase by an estimated $2 billion.

He blamed Southern’s decision to accelerate testing of the unit before completion of most of the construction work. “This has then led to inefficient and costly execution of construction, piece-by-piece testing and retesting of partial systems and complete systems,” he testified. He also said some electrical work will require remediation.

In recent weeks, Southern Chairman and Chief Executive Thomas A. Fanning pushed back the plant’s scheduled start of generating electricity from November 2021 until early 2022. Last month, he said at the company’s annual shareholder meeting that testing of the equipment to ensure the plant was safe “may take a few weeks longer than our original plan.”

Cost overruns doomed the only other new U.S. nuclear-power plant begun this century. In 2017, Scana Corp. SCANA 0.98% ▲ scrapped plans to finish a half-built nuclear-power plant in South Carolina. When first proposed in 2008, the V.C. Summer Nuclear Station was expected to cost $11.5 billion. A minority owner of the plant, state-owned electric utility Santee Cooper, said cost estimates had ballooned to $25.7 billion.

The fallout from the decision to stop work on the nuclear station—which saddled South Carolina electric customers with large bills for a plant that will never generate power—turned into a political and financial controversy in the Palmetto State involving who should pay and who was responsible for decisions to move ahead with the project despite signs of trouble. Scana later agreed to a $137.5 million settlement to resolve civil-fraud charges related to the failed project, after the Securities and Exchange Commission accused the company and a subsidiary of defrauding investors by making false statements about the half-built plant. Scana lost support from the state’s political leaders, and in 2019 Dominion Energy Inc. D -0.17% ▼ acquired the company.

The 2020 World Nuclear Industry Status Report, a widely cited independent industry analysis, said 408 reactors were operating last year world-wide, down from a peak of 438 in 2002. A small number of new reactors have started in recent years, in China, Russia, South Korea and the United Arab Emirates, according to the report.

Over the past decade, the cost of generating electricity from new nuclear-power plants has increased about 33% and the cost of new solar generation has fallen 90%, said Mycle Schneider, publisher of the report. “The scissors are opening wider and wider and I haven’t seen any sign anywhere that this is going to stop,” he said.