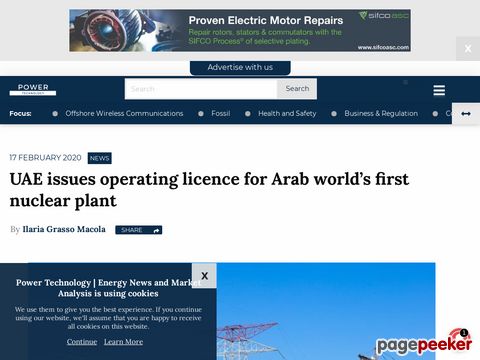 The UAE Federal Authority for Nuclear Regulation (FANR) has issued a 60-year-long operating licence for Unit 1 of the Baraka nuclear power plant, the first nuclear plant in the Arab world.

In a statement published today, the agency said that after an extensive inspection process, Nawah Energy – the company that owns the plant jointly with Kepco, South Korea’s largest utility corporation – is ready to commence the safe loading of its first fuel assemblies into the reactor.

Abu Dhabi crown prince Sheikh Mohammed bin Zayed commented: “Today marks a new chapter in our journey for the development of peaceful nuclear energy with the issuing of the operating license for the first Barakah plant.

“As we prepare for the next 50 years to safeguard our needs, our biggest strength is national talent.”

Located in the Al Dhafra area, 32 km southwest of Abu Dhabi, development plans for the plant started in 2012 as part of the UAE effort to diversify its energy sources.

The Barakah plant consists of four nuclear reactors that are expected to produce 5,600 MW of electricity, providing 25% of UAE electricity needs.

According to the Emirates Nuclear Energy Corporation (ENEC) – Nawah Energy’s parent organisation – the plant provides clean energy that saves up to 21 tonnes of CO2 emissions every year.

UAE permanent representative to the International Atomic Energy Agency (IAEA) said in a press conference: “This is a historic moment for the UAE, making it the first Arab country in the region to operate a nuclear power plant.

“This milestone was achieved due to the UAE’s vision and its leadership to build a peaceful nuclear energy program to cater for the future needs of energy in the country.”

According to energy and nuclear policy analyst Mycle Schneider, the UAE will need to develop effective emergency strategies and waste management scheme if the country wants to succeed.

Schneider said: “Safety and security for the entire region will depend on it. The main Fukushima lesson was that a spent fuel fire in the pool of unit 4 could have liberated 100 times more radioactivity than the release from the three reactor meltdowns and led to evacuation-level contamination for 35 million people.

“A major accident or a successful attack at Barakah could have devastating effects for the region.”