Despite nuclear power offering a clean, reliable source of energy, sub-optimal finances and devastating accidents have made many sceptical of the benefits of the energy source. JP Casey speaks to Shaun Burnie, senior nuclear specialist at Greenpeace Germany to learn about the organisation’s long-standing opposition to nuclear power, and whether the power source could play a role in the world’s future energy mix. 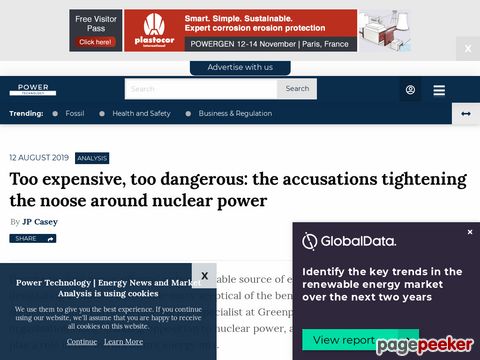 Source : Too expensive, too dangerous: the accusations tightening the noose around nuclear power https://www.power-technology.com/features/too-expensive-too-dangerous-the-accusations-tightening-the-noose-around-nuclear-power

Nuclear power has long been touted as a solution to the world’s energy supply crisis. At its best, nuclear is more reliable than renewables, which are affected by changes in weather and climate; cleaner than fossil fuels, which produce harmful carbon dioxide emissions; and more efficient than traditional energy sources, with the US Government reporting that nuclear can be up to four times as efficient as coal or renewable facilities.

However, concerns about nuclear have persisted for just as long. Events such as the 2011 Fukushima disaster and the success of the HBO series Chernobyl have turned public opinion against nuclear due to the potentially devastating consequences of safety breaches. Similarly, the economic benefits of the power source have been called into question, with France, which relied on nuclear for 71% of its electricity generation in 2017, caught between the need to invest in new nuclear facilities and the prohibitive expenses of constructing and maintaining nuclear reactors.

Greenpeace has been one of the most consistent anti-nuclear voices, arguing that the energy source is too dangerous, the facilities too expensive and the projects ultimately distracting from other, safer forms of renewable energy. We spoke to Shaun Burnie, senior nuclear specialist at Greenpeace Germany, about the group’s opposition to nuclear power.

JP Casey (JPC): What are Greenpeace’s objections to nuclear power?

Shaun Burnie (SB): Nuclear reactor designs in global operation have both design flaws and ageing-related safety issues that threaten a major nuclear accident. The costs of a severe nuclear accident are enormous. The most credible cost estimate for the Fukushima Daiichi accident now range from JPY35-80tn, or $320-740bn. But this is not the worst case scenario. The French IRSN conducted an assessment of the range of costs of a severe accident at the Dampierre nuclear plant. In the best-case scenario, costs came to €760bn, more than a third of France’s GDP. At the other end of the spectrum: €5.8tn or three times France’s GDP.

Post-Fukushima safety lessons have been resisted from being implemented by the nuclear industry due largely to avoiding costs. The Nuclear Regulatory Commission (NRC) commissioners on 24 January 2019 voted by majority to remove proposed safety requirements in a draft rule making issued in 2016, that, if applied, would have forced utilities to take certain measures to upgrade their plants to mitigate against hazards such as flooding and major seismic events.

At all stages of the nuclear fuel cycle nuclear waste is generated for which no nation has found a means to safely store and dispose of; with radioactive half-lives measured in tens, hundreds and tens and hundreds of thousands of years, no nation, despite decades and billions of dollars of investment has solved the disposal challenge of nuclear waste.

JPC: Greenpeace has also said that nuclear power is economically unfeasible. Could you explain how this is the case?

SB: Leaving aside the costs of nuclear accidents, nuclear construction costs are escalating, driven by the complexity and demanding nature of the technology, while renewable energy costs – solar and wind – have cut costs by 50 to 75% in a decade or two. The current reality is that global investment in new nuclear plants is a fraction of global investment in renewable energy; for reactor constructions started in 2017, investment costs of $16bn for about 4GW were made. This compares to $280bn [in] renewable energy investment, including over $100bn in wind power and $160bn in solar photovoltaics (PV). Wind added 52GW and solar PV a record 97GW. These numbers compare to a 3.3GW increase for nuclear power.

The United States, with the world’s largest nuclear fleet, highlights these issues. In six decades, the nuclear industry has never delivered on the promise of low-cost power, but the industry is large, concentrated, and politically well connected, so it is sustained by federal loan guarantees ($12bn for Plant Vogtle), and state bailouts where ratepayers are charged for construction and lose out even when the new reactors are abandoned as happened at the Westinghouse AP1000 reactors in 2017.

JPC: Do you agree with the argument that nuclear could provide a reliable source of power to cover the shortfall of renewable sources?

The challenge is not how will the world produce power reliably, but rather can renewable energy expand fast enough to displace fossil fuel, the answer to which is yes if the right policies are put in place. In the timeframe required to get to zero carbon in the energy sector, nuclear power is irrelevant as it cannot be scaled up in the time available.

JPC: Do you think France’s commitment to nuclear has been a positive development?

SB: France has created a nuclear crisis by the scale and design of its reactor program over the past 40 years. The state utility, EDF, appears to be too big to fail, yet its debts in 2015 were €34.2bn. The direction of Frances energy future is clear, even if EDF is determined to prevent the growth of renewables. The question is how much will the French taxpayer be required to save EDF’s nuclear fleet?

One consequence of the French programme is that they have created a nuclear waste crisis for which they have no feasible solution or the financing to deal with. This includes thousands of tons of spent fuel pools that are highly vulnerable to accident and security risks and stocks amounting to 65 tons of weapons-usable plutonium for which it has no viable solution.

The only reactor under construction in France, the EPR at Flamanville, is a technical and construction failure; [it is] at least 3.5 time more expensive than originally planned [and] as of 2018 it was 7.5 years behind schedule. There is no credible scenario where more EPRs will be built in Europe, yet it was hailed by France as the basis for its global exports.

JPC: Do you think nuclear will have a larger role in the energy mix in the future?

SB: In most countries operating nuclear power today, the future is one of terminal decline in nuclear generation. But the timeframe will vary in each country; Germany will end nuclear generation in 2022, whereas South Korea’s nuclear reduction and phase out will be over the next 40 years. The critical factor will be approval or not for extending reactor lifetimes not just to 40-60 years but to 80 years.

At the same time the material degradation of critical components, including Reactor Pressure Vessels, means that operating older reactors only increases the risk of catastrophic failure, potentially leading to an accident far worse than Fukushima or even Chernobyl.

The overall nuclear share of the world’s electricity is unlikely to increase over the coming decades. It’s a question of how long the industry can delay its closure, but one consequence of this is that as the nuclear industry seeks to dominate the debate on energy and climate, it will take longer to make the fundamental change to energy systems based on renewable energy.