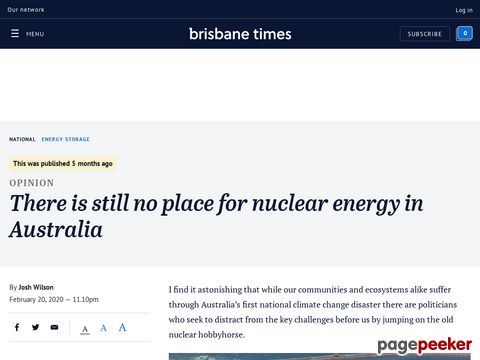 Source : There is still no place for nuclear energy in Australia https://www.brisbanetimes.com.au/national/there-is-still-no-place-for-nuclear-energy-in-australia-20200217-p541of.html

I find it astonishing that while our communities and ecosystems alike suffer through Australia’s first national climate change disaster there are politicians who seek to distract from the key challenges before us by jumping on the old nuclear hobbyhorse.

More than 10 years on from the Switkowski review, all the relevant considerations have tipped further away from nuclear power. It continues to be expensive, slow, inflexible, uninsurable, toxic, and dangerous at a time when renewable energy generation and storage is becoming faster, cheaper, and more efficient. And in the meantime we’ve experienced Fukushima, which has displaced 40,000 people, still leaks radiation into the sea, and will cost Japan more than $200 billion.

The clearest point made in evidence to the recent nuclear inquiry was that settling a national energy policy is our highest priority. Without this framework, Australia’s progress towards a decarbonised energy system with better co-ordination and lower prices remains stymied. Despite that call being made by Ziggy Switkowski, Ian MacFarlane, our energy regulators and various economic and energy experts, government members of the committee couldn’t bear to see this sensible recommendation in print. Why? Because they knew it reflected poorly on the government.

The hard conservative core of the Coalition doesn’t believe in climate change and sees renewable energy as a similarly “green-left” plot. This wild disconnection from science, economics, and public consensus is hurting Australia. Even the mild courage required to deliver their own National Energy Guarantee cannot be found within the current circus.

Instead, we get the rising hum of nuclear fairy tales and the wishful myths that go with them. Top of that list is the furphy that nuclear energy, while risky and poisonous and productive of waste that no one knows how to safely store, is somehow comparatively cheap. That’s just rubbish. The definitive analysis of energy costs in the Australian context is the recently updated AEMO/CSIRO GenCost report. It confirms under various scenarios that nuclear power simply cannot compete on cost with firmed renewables.

The latest darling of the ever-faithful nuclear fan club is the small modular reactor. SMRs, we are told, will be magically cheaper and safer. Such claims have been made by the nuclear industry about each new generation of technology right up to the point at which they turn out to be spectacularly untrue. At the moment SMRs simply don’t exist.

Myth number two asserts that as a matter of fact it is impossible to reach 100 per cent zero-emission energy without nuclear. Also wrong. Those making the claim are the same people who said that a 20 per cent renewable energy target for 2020 was reckless, and that a 50 per cent target for 2030 would be “economy wrecking”. Experts at the ANU gave evidence pointing to Australia’s potential as a renewable energy superpower with both generation and storage meeting our electricity needs and allowing us to export emission-free hydrogen.

The third myth is that Australia is missing out on the popular uptake of nuclear technology. In reality nuclear energy worldwide is in serious decline. The latest issue of the World Nuclear Industry Status Report shows that the nuclear share of electricity generation has dropped from its 1996 high of 17 per cent in 1996 to 10 per cent in 2018.

Countries that have relied on nuclear energy in the past are winding down their reliance. France has a target to reduce nuclear energy by a third. South Korea has decided it will no longer build nuclear. The UK is grappling with the costly implications of a new reactor that is years behind schedule and billions over budget, propped up by a 35-year power purchase agreement at double the current cost of electricity.

The most absurd myth of all is that we are being prevented from having a conversation about nuclear because of the current moratorium. Really? The claim is made in the report of yet another Parliamentary committee inquiry, which, in addition to receiving thousands of submissions, also involved public hearings in Brisbane, Melbourne, Sydney, Perth, Canberra, and Adelaide. Our inquiry followed the Switkowski review, the South Australian Royal Commission, and sits alongside a Victorian upper house inquiry.

There is nothing wrong with keeping an open mind on any topic but it shouldn’t be a blank mind. All the evidence shows there is no place for nuclear energy in Australia. Our policy paralysis is holding back our potential to be a renewable energy superpower. Those who agitate for an ongoing conversation on nuclear are spruiking a dangerous distraction.

Josh Wilson MP is shadow assistant minister for the environment.

• Sydney Morning Herald (Australia): “There is still no place for nuclear energy in Australia”, 21 February 2020