Stanford professor Mark Z Jacobson has said new nuclear plants may cost up to 7.4 times more than wind and solar facilities, with construction times longer by up to 15 years. Such a delay, he said, may see an huge amount of extra carbon emissions from fossil fuel power sources. His verdict comes as China this month set new guaranteed tariffs for nuclear power. 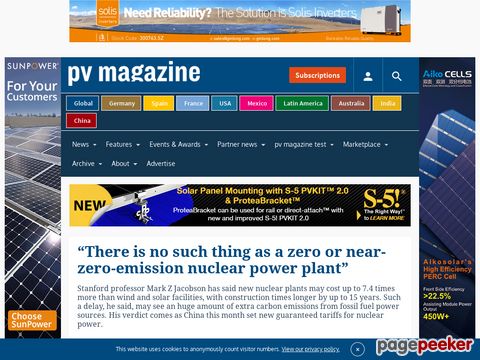 Source : “There is no such thing as a zero or near-zero-emission nuclear power plant” 18 April 2019 https://www.pv-magazine.com/2019/04/18/there-is-no-such-thing-as-a-zero-or-near-zero-emission-nuclear-power-plant

Claiming nuclear power plants emit zero or near-zero CO² is a false assumption refuted by objective data, according to the Evaluation of Nuclear Power as a Proposed Solution to Global Warming, Air Pollution and Energy Security paper written by Stanford professor of civil and environmental engineering, Mark Zachary Jacobson.

In the study Jacobson – who is also director of the Californian university’s Atmosphere/Energy program – highlights the risk of overestimating nuclear’s ability to reduce global warming and air pollution, as well as its claims about ensuring energy security.

The professor said construction times for new nuclear plants range from 10 to 19 years. “An examination of some recent nuclear plant developments confirms that this range is not only reasonable but an underestimate in at least one case,” he wrote. The paper cites the Olkiluoto 3 reactor in Finland, the Hinkley Point nuclear plan in the UK and Vogtle 3 and 4 reactors in Georgia, among others, as examples of projects for which planning began in the past decade and whose entry into commercial operation is still far from complete.

With new nuclear projects taking so long – and utility scale solar or wind schemes requiring 2-5 years to begin commercial operations – nuclear effectively emits a hundred years’ worth of 64-102g of CO² per kilowatt-hour of plant capacity just from grid emissions during the wait for projects to come online or be refurbished, compared to wind or solar farms.

Jacobson added, a further 2-4 years of plant downtime will have to be factored in to take account of the refurbishment required to ensure nuclear facilities run for their expected 40-year lifetime. “Overall, emissions from new nuclear are 78-178g [of] CO²/kWh, not close to zero,” he wrote. “Even existing plants emit, due to the continuous mining and refining of uranium needed for the plant.”

China and its nuclear plans

According to Jacobson, the lengthy delays to realizing China’s nuclear plant investment have effectively been responsible for a 1.3% rise in carbon emissions in the nation between 2016 and 2017, rather than the 3.4% fall claimed by the authorities.

According to the Stanford paper, the capital cost of new nuclear ranges from $6,500-12,250/kW, whereas a new wind turbine ranges from $1,150-1,550/kW. “Dividing the high (and low) capital cost of nuclear per kW by the low (and high) capital cost of wind per kW and multiplying the result by 14 GW gives a range of 58.7-149 GW nameplate capacity of wind that could have been installed and running prior to 2017,” the report stated.

Despite the big difference in costs, China’s National Development and Reform Commission set new guaranteed minimum on-grid electricity tariffs for third-generation nuclear power stations this month. According to Reuters, the Taishan project in Guangdong province was set at RMB0.435 ($0.0649) per kWh, while prices for the Sanmen project in Zhejiang province and the Haiyang plant in Shandong province were set at RMB0.4203 and RMB0.4151 per kWh, respectively.

In a statement provided to pv magazine at the time, Mycle Schneider – a French consultant specializing in nuclear energy – said the new fixed tariffs are in the same range as previous nuclear subsidies. “That is rather surprising as these units were significantly more expensive than the previous reactors and they are years behind schedule and massively over budget,” he said. “[It is] hard to believe that they will be making any money. 435 Yuan [RMB] per megawatt-hour – around 65 U.S. dollars or 58 euro – is about half of the strike price agreed for Hinkley Point C.”

Schneider added PV and wind costs have come down so much China is investing much more in renewables than nuclear. “The bottom line is that it is likely that China will restart nuclear building at some point – the last commercial unit started building in December 2016 – but that the pace will be significantly lower than anticipated, leaving the biggest chunk of new electricity generating capacity to renewables, just like anywhere else but on a bigger scale,” he added. As of July 1, China had 41 operating reactors with a total net capacity of 38 GW.

In the 2018 edition of the Nuclear Industry Status Report, Schneider revealed nuclear power capacity grew globally by only 1% in 2017 while solar and wind capacity rose 35% and 17%, respectively. The report also recognized solar and wind were the cheapest grid-connected sources of energy. Investments in new nuclear plants, on the other hand, were driven by public support and by nuclear weapon states, according to the paper.