A significant decrease in the number of nuclear newbuild projects around the world has been registered by the World Nuclear Industry Status Report (WNISR), hitting a decade low, mainly after the 2011 Fukushima disaster and due to the increasing costs of the atomic energy. 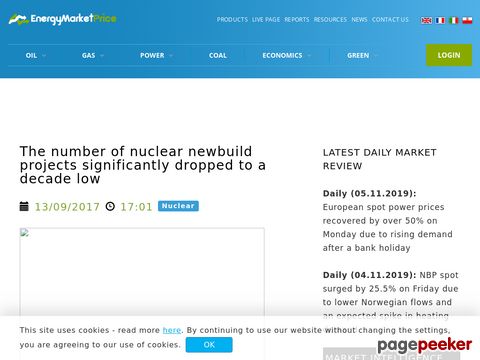 China, as the most dynamic builder of nuclear power stations in the last decade, observed a slower activity in its newbuilt plants, or a decrease from 10 in 2010 to 6 in 2015 and just two in 2016.

A spike in nuclear plants construction projects was marked in 2010 after a standstill of 20 years caused mainly by the Chernobyl catastrophe of 1986.

Looking at WNISR data, it could be figured out that between 1977 and mid-2017, around one in eight reactor construction areas worldwide were abandoned at different stages of the construction process.

A new annual meeting of the nuclear industry is being held this week in London. There are voices exclaiming that nuclear will continue to play a significant role in low-carbon electricity generation, emphasizing major newbuild projects in China, India, Britain and South Africa.

WNISR highlights that last year the nuclear energy share in global electricity output was 10.5 percent, rolling back from a high of 17.5 percent in 1996.

Most likely, next year, the United Arab Emirates will initiate building the first of four reactors in South Korea.

The 2016 Vietnam’s plan to construct a new nuclear reactor was abandoned due to high costs and safety worries.

The only country to initiate a new-build reactor project in the first half of 2017 was India.