Biden is flirting with the idea of rejuvenating the industry to help decarbonize the economy—and there are skeptics in spades. 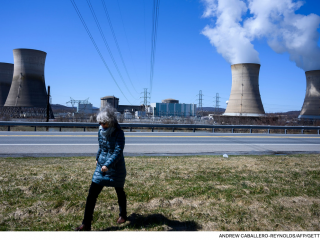 Joe Biden will have to do more about climate change than any president before him. He has no choice. Already, close U.S. allies are openly expressing their relief about the end of the ecologically disastrous Trump era while a coalition of left-wing politicians and organizations are demanding sweeping emissions reductions.

Biden’s campaign climate promises were extensive. But one of the more interesting promises in the plan—and one of the ones key to determining how he approaches emissions reduction—was his promise to “identify the future of nuclear energy.” That means reopening discussion of a technology many environmentalists once thought would be rotting in the dustbin of history by now.

Nuclear energy has its advantages. In spite of its Simpsons-era reputation as a wellspring of toxic waste, mutated animals, impotence, and cancer, electricity from nuclear reactors is, on the whole, better for the earth than the greenhouse gas-spewing coal and natural gas plants that still make up a majority of the U.S.’s energy mix. And nuclear plants still provide more electricity in this country than all renewable sources like solar and wind. If someone could wave a magic wand and make a few dozen nuclear generating stations materialize overnight like toadstools, we could all breathe a little easier (literally) about the environment.

But that doesn’t look like it’s on the verge of happening. The France-based World Nuclear Industry Status Report for 2020 describes an industry largely in stagnation around the world. In the U.S. in particular, the nuclear picture is “centered around the relentless efforts of the industry and their supporters to gain financial assistance for lifetime extensions of their ageing reactor fleet,” the report says. Nuclear energy companies are “increasingly struggling in a competitive electricity market with low prices, flat consumption (at best) and ferocious rivals in the renewable energy sector.”

Part of the reason nuclear energy construction remains difficult and expensive in the U.S. is that in polls Americans are split down the middle on their approval of nuclear energy, and opponents make a big stink when construction of a nuclear plant is being discussed. These are rational worries, according to Mark Delucchi, a research scientist affiliated with UC Berkeley and Lawrence Berkeley National Laboratory, which operates on behalf of the U.S. Department of Energy. In addition to the risk of meltdowns—which are, admittedly, rare—we have to also consider the disposal of caches of spent nuclear fuel, the risks of which “are potentially much more abroad in time and space,” Delucchi said. “They affect people. They affect other ecosystems. They affect different generations. And they’re unknown.”

“It kinda boggles my mind how anyone who has any clue about solving problems related to climate or energy still considers nuclear power,” said Mark Jacobson, professor of civil and environmental engineering at Stanford University and a frequent collaborator with Delucchi. As Jacobson pointed out, there’s next to no active construction of nuclear power plants currently going on in the U.S. All of the U.S. nuclear energy construction happening right now consists of two reactors in Georgia that Jacobson says “may never even be finished.” A project in Utah set to break ground soon was set in motion by politicians accused of conflicts of interest, and construction of that plant has faced opposition from activists since its inception. In 2017, two U.S. nuclear reactor projects were canceled after construction had begun, leaving investors on the hook for billions of dollars. “So people are trying to say that we should build lots of these things that you can’t even build one of?” Jacobson said.

Despite the near impossibility of constructing one of these plants, greater federal investment in nuclear energy appears to be on the table. Biden’s transition team includes Rachel Slaybaugh, a Berkeley nuclear engineer. The Senate Committee on Energy and Public Works earlier this month approved a bipartisan bill aimed at protecting existing nuclear infrastructure, developing new nuclear technology, and supporting uranium mining.

America’s pro-nuclear voices tend to hail from the aggressively moderate part of the political spectrum. The centrist think tank Third Way says on its website that “advanced nuclear is shaping up to be a key component in our race to zero emissions.” House Minority Leader Kevin McCarthy conceded in February that climate change is real—a step not all Republicans have taken—but claimed that the Democrats are going about trying to fix it all wrong. We should be, McCarthy wrote on his website, “investing in clean energy technology that will lead to less emissions, lower costs, and produce as much or more power. Chief among them is advanced nuclear technology.”

Rather predictably for anyone who follows this issue, McCarthy’s statement about clean energy (which doesn’t mention wind or solar) includes several citations of rockstar nuclear activist Michael Shellenberger, a guy who doesn’t think climate change is that bad and who has given not one, but two blockbuster TED talks attempting to bodyslam wind and solar, one of which is bluntly named “Why renewables can’t save the planet.” Over 2 million people have watched it on YouTube alone.

The notion that nuclear power is necessary and inevitable is far from a fringe viewpoint. Last year, The New York Times ran an op-ed called “Nuclear Power Can Save the World,” written by three Ph.D.-holders, including cognitive neuroscientist and radical optimist Steven Pinker. According to this brand of eco-contrarianism, nuclear is not just viable, but the only pragmatic plan for decarbonizing the U.S. energy grid. Built into this message is invariably the idea that plans outlined by environmentalists, activists, and alternative energy proponents are actually doing more harm than good. It’s not that these folks want nuclear to have a seat at the table as humanity negotiates its energy future; they want to nuke-pill the whole climate movement.

But inevitably, this rhetoric has to address the chief problem of nuclear power, which is that it is extremely time-consuming and expensive to build new reactors. The solution, nuclear supporters argue, is to take a modular approach to our nuclear construction. Modularity means minimal variation at each new site, a streamlined design process, and less of the sort of worksite entropy that slows things down. In other words, cookie-cutter them into the energy landscape as quickly as possible.

There’s reason to be skeptical of this approach. “Claims about the technical and economic attractiveness of modular or small scale nuclear reactors, I think, are potentially especially problematic on the political side of things,” Delucchi said. “A lot of the costs associated with nuclear power are based on technologies that are not commercialized, or even particularly close.”

Plans based on 100 percent renewable energy are routinely criticized for relying on technology not yet available or cost-effective. Clearly, though, that’s also true for nuclear power. Nuclear fans, then, are asking the country to bet on a successful nuclear expansion at a time when we have less than ten years—roughly the time it takes to carry out the relatively smooth construction of a single nuclear power plant—to cut our greenhouse gas emissions by 40–50 percent from 2010, or else we’ll blow past the ugly 1.5 degree warming threshold, according to the Intergovernmental Panel on Climate Change (IPCC), and plunge ourselves into climate chaos. That’s quite a bet.

In practical terms, all Biden has promised to do with regard to nuclear energy is form a research agency, dubbed ARPA-C, and churn out some government reports about it and other energy possibilities. And it won’t be at all surprising if, like Trump, Biden also gives a little boost to uranium mining companies that are desperate to expand their operations.

If ARPA-C’s research into modular reactors produces breakthroughs, more uranium gets mined, regulations fall away, public outcry dies down, and nuclear really turns out to be the answer to climate change, that should become clear by the end of Biden’s first term. If the U.S. is going to come anywhere close to meeting the IPCC’s recommendations for avoiding catastrophic warming through nuclear power, modular nuclear plants will be going up all over the place by January of 2025. We should see ribbons being cut, foundations being poured, and uranium ore well on its way to being enriched. “Small-scale modular” will have to become one of those eye-rollingly overused cliches, like “OK Boomer” or “social distancing.”

None of this seems particularly likely. And if the nuclear revolution doesn’t happen in the next four years, it’s probably not going to happen, given the slow pace of nuclear power construction. All those pragmatic arguments for nuclear energy will probably end up looking as fantastical as a three-eyed fish.

Mike Pearl is a freelance writer and author of The Day It Finally Happens: Alien Contact, Dinosaur Parks, Immortal Humans―and Other Possible Phenomena.