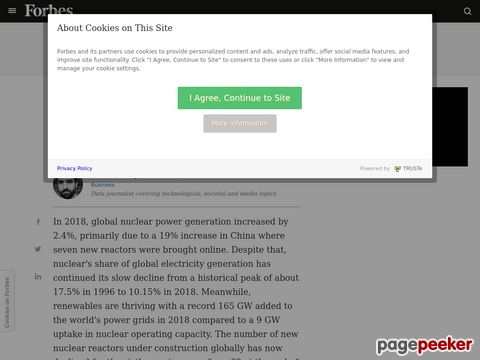 Source : The Countries Operating The Most Nuclear Reactors https://www.forbes.com/sites/niallmccarthy/2020/02/06/the-countries-operating-the-most-nuclear-reactors-infographic

In 2018, global nuclear power generation increased by 2.4%, primarily due to a 19% increase in China where seven new reactors were brought online. Despite that, nuclear’s share of global electricity generation has continued its slow decline from a historical peak of about 17.5% in 1996 to 10.15% in 2018. Meanwhile, renewables are thriving with a record 165 GW added to the world’s power grids in 2018 compared to a 9 GW uptake in nuclear operating capacity. The number of new nuclear reactors under construction globally has now declined for the sixth year in a row, from 68 at the end of 2013 to 46 by mid-2019, of which 10 are in China.

The above data comes from the 2019 World Nuclear Industry Status Report which provides an overview of the age, operation, production and construction of nuclear power plants around the world. The report states that 417 reactor units were operational in 2019 with another 28 in long-term outage. The United States accounted for the highest number of operational units at 97 and another two are currently under construction. American reactors have a mean age of 38.9 years and they account for 19.3% of the country’s electricity generation. With 58 reactors, France comes second on the nuclear power list and its units account for 71.7% of all electricity generation.

Despite its recent focus on renewables, China has made rapid progress in power plant construction and it had the world’s third-highest total in 2019 at 47. Russia and South Korea came fourth and fifth on the list with 36 and 23 operational units respectively. Ukraine and Japan are still operating nuclear power plants despite serious accidents at Chernobyl in 1986 and Fukushima in 2011. Ukraine still has 15 operational reactors compared to Japan’s nine. Japan is notable on the list as having the highest number of reactors in long-term outage, however, with 24.