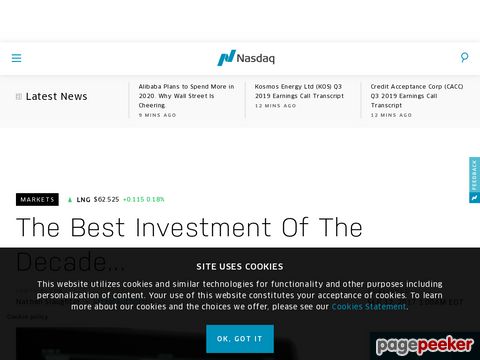 Source : The Best Investment Of The Decade... http://www.nasdaq.com/article/the-best-investment-of-the-decade-cm844084

Just a few short years after President Reagan cried at the Brandenburg Gate, “Mr. Gorbachev, tear down this wall!” a new era had dawned in the world order.

After fighting proxy wars around the globe and decades of saber-rattling, the United States and the former Soviet Union had managed to avoid self-destruction.

But what if I was to tell you that by 1993, a little-known agreement between Russia and the U.S. was signed that would have major consequences for the U.S. energy supply for the next 20 years?

Its purpose: convert 500 tons of Soviet-era warheads into uranium for U.S. nuclear power plants. It was called “Megatons to Megawatts.”

It sounds almost too strange to be true. But up until just recently, this fuel accounted for 10% of our total electricity — more than solar, wind and hydro combined.

And the program worked well. Maybe too well...

Because at one point, Russia refused to renew the deal. And now, the United States is facing a serious uranium shortage.

For those of you wondering why I bring this up, it’s because this is the subject of the latest research report for my premium commodities investing service, Scarcity & Real Wealth .

But this little-known deal with Russia is just half the story. In short, I’m making the case that conditions are ripe for a tremendous shortage in uranium worldwide. And that can only mean one thing...

Prices are going to go up in a big way.

The good news is this: 1) We’ve had two major shortages of uranium in the past (1976 and 2007), so we know what we’re dealing with; and 2) We know EXACTLY how investors can play this situation to profit.

Now, to get the full details, you’ll have to check out the report . There’s simply too much ground to cover with this story to squeeze everything into today’s issue. But I want to dive in just a bit today and give you a more comprehensive view of just what exactly makes uranium so appealing in the first place.

This Could Be The Best Investment Of The Decade Uranium has been stuck in a terrible slump since March 2011, when a devastating tsunami struck Japan and wiped out the Fukushima nuclear power plant. The shocking event dampened the global outlook for nuclear power for the next several years, and sent Uranium plunging from $70 per pound to a 12-year low of $18 per pound by December 2011.

As you probably know, enriched uranium is the feedstock that fuels the world’s nuclear reactor fleet. And while many investors have overlooked nuclear energy over the past several years, the fact is this clean and cost-effective energy solution is headed for a rebirth — the type that could make well-positioned investors a small fortune.

Fast forward to today, and you’ll see how not much has changed — yet. Uranium prices have been steadily between $20 and $30 per pound. Just two of Japan’s 42 nuclear reactors are operational, as liquefied natural gas ( LNG ) imports pick up the slack. Safety concerns have also caused some plants in Europe (such as Germany’s) to close, making way for wind and solar power systems.

For now, world uranium supplies are plentiful. But the winds are beginning to change.

Why A Nuclear Comeback Is Imminent Uranium sold for as much as $132 per pound as recently as 2007 — at least four times higher than today’s prices. With today’s low uranium prices, world governments are finding it hard to ignore such a readily available, clean, and cheap energy resource — especially in the developing world where demand for electricity is rising at breakneck speeds and government budgets only seem to get tighter.

Nuclear power plants are costly to build, but cheap to run. One kilogram of uranium yields about 20,000 times as much energy as the same amount of coal, which makes nuclear plants very cost-effective per kilowatt hour.

To be sure, safety concerns remain. But we don’t ground the world’s jets after a plane crash or stop drilling after an oil spill. Instead, we learn and implement new safety measures and precautions to help ensure they don’t happen again.

With fears subsiding and budgetary pressures from governments mounting, the nuclear industry is ripe for a strong resurgence. According to the World Nuclear Association, there are already more than 60 nuclear reactors currently under construction and 150 in the planning stages — all with hungry appetites for uranium.

A Worldwide Boom In Nuclear Construction, With China Leading The Way

Some analysts believe that half of Japan’s idle fleet will be up and running by next year. As for new construction, there are seven nuclear reactors being built in Russia. India is adding five, with the goal of boosting nuclear power generating capacity by 45,000 megawatts over the next couple years. Each new gigawatt of power generation will require 300-400 tons of uranium for its first fuel load.

But the biggest growth driver is China, which is trying to wean itself off coal pollution and looking to increase nuclear generating capacity by 70% over the next three years. China’s nuclear fleet will soon double from 25 reactors to 50, and there are twice that many in the long-term planning stage.

The Coming Uranium Shortage With all the nuclear reactor construction being planned around the world, Morningstar is projecting a 40% surge in uranium usage by 2025.

Globally, it will be tough finding enough supplies to feed all those new reactors, which is why there are already whispers of a supply crunch setting up within the next few years — one that could widen precipitously as more reactors come online.

So how big is the uranium shortage so far? For reference, more than 635 million pounds of uranium have been consumed by reactors since 2013, yet power generators have only bought enough future contracts of the resource for 245 million pounds of supply.

That means the cupboard is starting to get bare. We’re rapidly approaching the point where the spot market won’t be able to satisfy demand.

How High Could Uranium Prices Go With That Kind Of Shortage? The kind of global shortage that analysts are expecting would easily be enough to shock uranium prices out of the doldrums. If prices rose from around $30, to, say, $65 per pound, uranium companies would find it financially worthwhile to start creating new supply — which could give their stocks a long-overdue boost.

Some observers are even more bullish on what a shortage could bring. Commodity fund manager Willem Middelkoop expects uranium prices to retake the $100 per pound level after 2020 given the demand outlook — tripling today’s prices. A jump that big could provide a tremendous lift to uranium stock prices as suppliers would enjoy much healthier margins on uranium sales.

Why Now Is The Time To Invest Power generators and governments recognize how discounted uranium prices are right now, which is why they’re ready to start loading up on the precious commodity in preparation for the future’s heavy energy demands.

The thing is, you can’t just run out to the local 7-11 and purchase enriched uranium. Buyers typically sign contracts three to four years in advance, meaning plants that will come online in 2020 will soon start putting in orders to secure future supplies.

That makes now an excellent time to consider buying shares of uranium suppliers, while uranium prices are still depressed and the supply contracts are still being written.

Unfortunately, I can’t give away my favorite pick in this space — this information is just way too valuable. I can’t risk creating a crowded trade for my Scarcity & Real Wealth readers. But if you’d like to learn more details about this situation, I’ve prepared a comprehensive briefing that you can view here . You’ll also have the chance to get the name of this pick, along with a risk-free trial of Scarcity & Real Wealth .