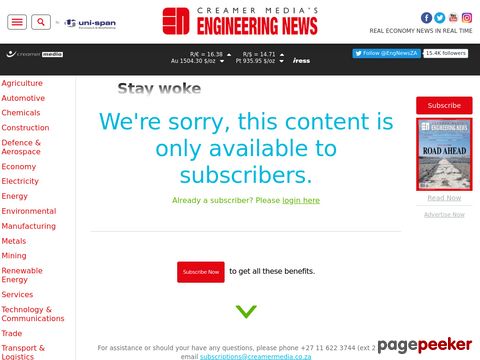 For all the wrong reasons, Eskom’s profile has remained high despite the stabilisation in electricity supply over the past year and a bit. Most of the current news flow has to do with governance failings and allegations of State capture and corruption. Sadly, the debate about the future structure of the industry and the role of the State-owned utility has become relatively subdued. This is worrying for two reasons. Firstly, the electricity industry globally is being disrupted, along with the utility model. And secondly, it is not at all clear that domestic policymakers are fully alive to the threats and opportunities being posed. To use social media vernacular, it’s uncertain if they are ‘staying woke’.

A slew of recent reports, from a diverse range of sources, point to the sweeping nature of the transition currently under way – one that should have South African electricity practitioners and policymakers sitting bolt upright. Two recent examples include the ‘World Nuclear Industry Status Report 2017’ (WNISR 2017) and a ‘Flexibility Study’, which assesses the impact of increasing shares of variable generation on system operations in South Africa. Both have important messages that should not be ignored.

In one of its chapters, the WNISR 2017 has an eye-opening comparison of recent investment and generation trends for nuclear and renewable energy. The report states that, since 2000, countries have added 451 GW of wind energy and 301 GW of solar energy capacity against only 36 GW of nuclear. Capacity, though, is not a helpful measure, given the variability of wind and solar. However, the report also shows that, on an output basis, wind grew by 16%, solar by 30% and nuclear by 1.4% last year. Wind power increased generation by 132 TWh, solar by 77 TWh, which was 3.8 times and 2.2 times more respectively than nuclear’s 35 TWh.

Nevertheless, fears persist about the impact variable renewable- energy production could have on system stability and security of supply. Well, the ‘Flexibility Study’, which assessed the challenge from a purely South African perspective, argued that the domestic power system is sufficiently flexible to handle large amounts of wind and solar photovoltaic (PV) generation, especially when factoring in the combined-cycle gas turbines and open-cycle gas turbine proposed in the Draft 2016 Integrated Resource Plan (IRP) Base Case. “To cope with increased flexibility requirements resulting from the installation of 4.2 GW of wind generation and up to 12.8 GW of PV by 2020, and 11 GW of wind and 27.5 GW of PV by 2030, flexibility requirements can be handled by existing and planned power plants at moderate additional costs,” the report states.

Then there is the work of the Council for Scientific and Industrial Research, which states that a mix comprising 90% renewables is not only technically possible by 2050, but would also be 30% cheaper than the generation mix currently outlined in the Draft IRP Base Case. There would be a requirement for additional investments to provide system stability as synchronous coal-fired generators are retired. However, even if this were to be achieved using only synchronous machines, such as flywheels, the overall system cost would increase by less than 1%.

These are significant, and relatively new, developments to which we can only hope our policy- makers are staying woke.