A deal long sought by French company Areva to build a $12-billion nuclear waste reprocessing plant in China looks increasingly unlikely to go ahead despite a visit to Beijing by President Emmanuel Macron meant to drum up business. 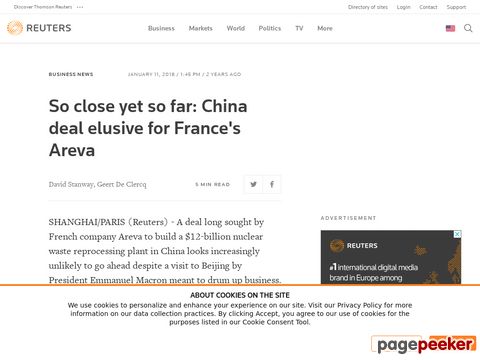 Source : So close yet so far: China deal elusive for France’s Areva https://www.reuters.com/article/us-areva-china-nuclearpower-analysis/so-close-yet-so-far-china-deal-elusive-for-frances-areva-idUSKBN1F01RJ?il=0

During Macron’s state visit this week, Areva and China National Nuclear Corp (CNNC) signed a new “protocol agreement” to build the plant but, not for the first time, no definitive contract was signed.

Since talks began more than a decade ago - when uranium prices UXXc1 were near record highs - a series of non-committal French-Chinese memorandums of understanding have been signed for building a reprocessing plant in China modeled on state-owned Areva’s plant in La Hague, northern France.

The reprocessing of nuclear fuel waste involves separating plutonium from the spent uranium and reusing it in “Mixed Oxide” (MOX) fuel at nuclear power stations.

But the 2011 Fukushima nuclear disaster and competition from renewable energy are weighing on the nuclear sector, and uranium prices are down 80 percent from a decade ago, making the expensive and dangerous recycling process less attractive.

“In China, no new reactor projects have been approved for two years, a reflection of overcapacity of power from other sources and concerns about nuclear power, so the urgency of this (reprocessing) plant isn’t strong,” he told Reuters.

French Finance Minister Bruno Le Maire said on Tuesday Paris had been given assurances that a contract would be signed this spring.

But French ministers and Areva executives have made similar comments before. In November 2007, former CEO Anne Lauvergeon said Areva could be building a reprocessing plant in China in two-to-three years “but we will not sign the contract today”.

In a statement on Wednesday, CNNC spoke of “deepening Chinese-French nuclear cooperation” but did not even mention spent fuel or reprocessing. Areva CEO Philippe Knoche said he hoped to finalize the deal and start the project this year.

Without a site for the plant, that could be difficult.

In 2016, China suspended preliminary work on a possible site in the city of Lianyungang, about 500 km (312 miles) north of Shanghai, following protests by local residents.

An industry source, who has discussed the matter with CNNC, said that with China no closer to selecting the location, it is unlikely a contract will be signed any time soon.

“Time is playing against Areva, and most people in the industry are skeptical. What’s the hurry?” he said.

Le Maire said talks with the Chinese were extraordinarily difficult and that France had “made an effort” on the price to try to unblock negotiations. He said the deal would be worth 10 billion euros ($12 billion). Ten years ago, Lauvergeon spoke of 15 billion.

Le Maire also said a contract for a reprocessing plant would “save” the French nuclear industry. After years of losses wiped out its equity, Areva had to sell its nuclear reactor arm to utility EDF (EDF.PA), and the state last year provided 4.5 billion euros to recapitalizes the firm.

A contract for a reprocessing plant would be a major boost for uranium mining and nuclear fuel group New Areva, whose margins are under pressure from the uranium glut. But it still appears to be a long shot.

“The Chinese government and Chinese industry are not in the business of saving Areva,” Xiamen University’s Li said.

He said China was likely to consider alternative solutions for nuclear waste, including dry cask storage.

Critics say that when uranium is scarce, reprocessing can make sense, although using plutonium creates proliferation and security risks. The alternative is to store spent fuel in ponds next to the reactors and to put it in central repositories, often underground, once it has cooled sufficiently.

The United States has given up on reprocessing, while Britain is phasing out nuclear fuel recycling and the Rokkasho reprocessing plant in northern Japan, built with Areva’s help, has struggled to start up after years of technical problems.

Besides France, Russia is the only country that reprocesses fuel, which it uses in two breeder reactors. Such reactor models are highly suited for the fuel but have been abandoned in most other nuclear nations.

“It makes no sense to do something as exorbitantly expensive as reprocessing when there is plenty of fresh natural uranium out there,” Schneider said.