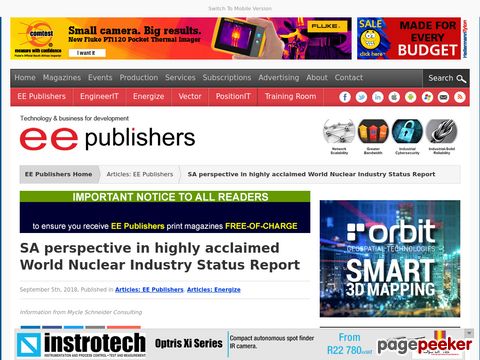 Prof. Emeritus Anton Eberhard from the University of Cape Town’s graduate school of business provides a view from a South Africa perspective in his foreword to Mycle Schneider Consulting’s highly acclaimed World Nuclear Industry Status Report 2018. The report provides a comprehensive overview of nuclear power plant data, including information on age, operation, production and construction. It assesses the status of new-build programmes in current nuclear countries as well as in potential newcomer countries.

This the foreword from the report

It’s that time of year again when those who value unvarnished data, and analyses of global nuclear energy developments, free of industry spin, look forward to the latest annual World Nuclear Industry Status Report (WNISR 2018). The 2018 edition does not disappoint; it reveals fascinating new information and trends, and confirms that, as the world undergoes a fundamental and far-reaching energy transition, nuclear is being left behind.

I have worked in the energy sector for nearly 40 years and I have never seen as rapid innovation and change as in the last five. The relative prices of electricity generation sources have switched, and solar and wind energy are now, in most countries, the cheapest grid-connected sources of energy. And as storage prices plummet, off-grid power solutions are becoming more cost-competitive. The electricity system is becoming more decentralised, with a multitude of smaller, incremental investments by utilities, industries and households, which are becoming producers as well as consumers of power.

Networks and mini-grids are increasingly radial, meshed and fractal, and as energy, transport and communications technologies converge, along with the internet of things, machine learning, demand-side management, and block-chain payment systems, energy services will be democratised and controlled to match optimally individual and community needs.

The nuclear industry seems puzzled by these developments and is mostly in denial. As the competitiveness of solar and wind energy become undeniable – renewable energy auctions are transparent with published long-term contracted prices – the nuclear industry shifts the debate away from the costs of nuclear to issues of system reliability and to its role in the transition to a low-carbon economy. In so doing, it discounts the huge construction time and cost overruns in generation III and III+ nuclear reactors and the difficulties of financing nuclear, especially in emerging economies.

China is possibly an exception, but it still has to demonstrate that it can achieve the same economies in foreign orders. Unless the nuclear industry, in the next few years, is able to develop commercially available, smaller, factory-assembled, modular reactors, at lower cost, with reliable, passive safety features, which the private sector would be willing to finance, and institutions insure – the prospects of which seem remote – it is hard to see how nuclear has a place in our energy transition 4.0 or the fourth industrial revolution.

Mycle Schneider, Antony Froggatt and their colleagues, in the WNISR 2018 edition, have once again produced a valuable resource for all those who look for data to understand trends in nuclear energy globally, and in specific countries.

As solar and wind grow exponentially, nuclear energy has remained stagnant. There are fewer nuclear reactors in operation today than there were 30 years ago. Nuclear reactors have increased in size, so they produce more electricity, but still less than in 2001. The share of global electricity production decreased from a peak of 17,5% in 1996 to 10,3% in 2017. This is hardly a growth industry.

It is instructive to note that the construction of new nuclear power plants is mostly driven and backed by states, and not by the private sector. China accounts for a third of nuclear plants under construction. Nuclear is becoming an option for fewer countries, and only those which are prepared to offer significant government support, including sovereign guarantees. It is regrettable that often this support is facilitated by rent-seeking and corruption.

South Africa provides an interesting case study. It has Africa’s only nuclear power station, built by the French in the 1980s. Despite numerous recent electricity generation expansion plans over the past decade, which showed nuclear did not feature in least-cost scenarios, the previous administration, under President Zuma, signed an inter-governmental agreement with Russia committing South Africa to invest in 9600 MW of nuclear reactors, supplied by Rosatom. This agreement was struck down by the South African High Court and fortunately the new government has made a commitment to a least-cost energy investment path that is also environmentally sustainable.

A further African example illustrates the futility of nuclear power in developing countries. A number of nuclear co-operation agreements have been concluded between nuclear vendors and African countries. But let’s remind ourselves that 27 countries in sub-Saharan Africa have power systems smaller than 500 MW and 14 smaller than 100 MW. Only Nigeria and South Africa have power systems larger than 3000 MW. The impact of a large nuclear power reactor – typically between 1000 and 1600 MW – is problematic in many power systems in developing countries.

I am pleased to see a section in this report on interdependencies between civil and military nuclear infrastructures. South Africa developed nuclear weapons on the back of its nuclear electricity generating industry. It argued that it made sense to enrich uranium for its Koeberg nuclear power station, but it used this as a smokescreen to develop technologies which enabled much higher enrichment levels and the construction of nuclear bombs.

As Nelson Mandela was released from prison, and South Africa moved from apartheid to democracy, South Africa became the first country in the world to voluntarily destroy all its nuclear weapons. However, we should not forget how the fuel cycle for nuclear electricity generation plants creates risks for nuclear weapons proliferation. The past few years have seen the bankruptcy of historically important nuclear energy industries: the US/Japan’s Westinghouse and France’s AREVA, which has had to be taken over by another majority-owned state-owned enterprise. There are fewer and fewer nuclear technology vendors.

I hope that future WNISR editions will include a chapter that focusses on the remaining nuclear energy vendors and their prospects for expanding investments in nuclear power markets, not just in their own countries, but also abroad. The nuclear industry has historically been powerful. It is not easy to hold truth to power. I applaud this publication for doing just that.

The foreword to this report is published here with permission.