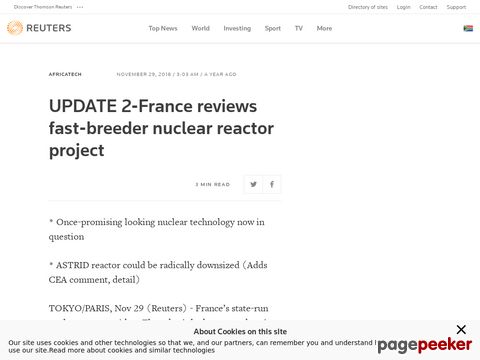 TOKYO/PARIS, Nov 29 (Reuters) - France’s state-run nuclear agency said on Thursday it had presented options on a new generation of fast-breeder nuclear reactors to the French government and talks were underway but dismissed reports in Japan that it had taken a decision.

The Nikkei business daily reported that France had informed Japan it would halt research into the ASTRID (Advanced Sodium Technological Reactor for Industrial Demonstration) project in 2019, with no plans to allocate a budget from 2020.

A spokesman for the CEA nuclear agency said one option it had discussed was to reduce ASTRID’s capacity to a 100-200 megawatt (MW) research model from the commercial-sized 600 MW originally planned.

Japan’s Chief Cabinet Secretary Yoshihide Suga said on Thursday he had not been informed about any French plans to freeze the project and that nothing has been decided.

In 2016, after decades of development, Japan pulled the plug on its own $8.5 billion Monju prototype fast-breeder project.

The ASTRID sodium-cooled reactor is one of several new “fourth-generation” designs that could succeed the pressurised water reactors that drive most of the world’s nuclear plants. tinyurl.com/y84d2hvc

Instead of water, they use liquid sodium as a coolant. But sodium burns on contact with air and explodes when plunged into water. An earlier French model was scrapped in the 1980s after have encountering major technical problems.

Russia is the only nation to have working breeder reactors, which can burn spent uranium fuel, plutonium and other nuclear waste products.

In theory, breeders could turn utility EDF’s nuclear waste into fuel and make France self-sufficient in energy for decades. Their potential is part of the reason why France recycles spent fuel from EDF’s reactors, separating out plutonium in state-owned Orano’s reprocessing plant in La Hague.

In 2010, the ASTRID project was granted a 652 million euro ($742 million) budget. Media reports have estimated France has budgeted up to 900 million euros through to 2019 for ASTRID.

President Emmanuel Macron said this week that nuclear will remain a key part of France’s power supply and that research in the field must be continued, but he did not mention ASTRID.