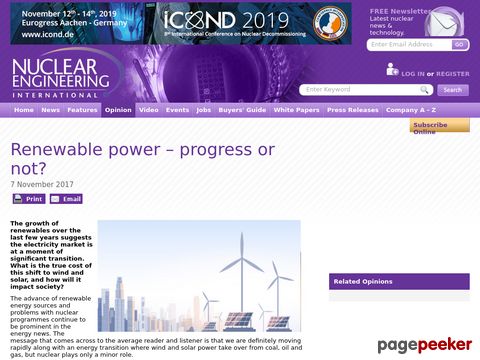 The growth of renewables over the last few years suggests the electricity market is at a moment of significant transition. What is the true cost of this shift to wind and solar, and how will it impact society?

The advance of renewable energy sources and problems with nuclear programmes continue to be prominent in the energy news. The message that comes across to the average reader and listener is that we are definitely moving rapidly along with an energy transition where wind and solar power take over from coal, oil and gas, but nuclear plays only a minor role.

Two recent publications highlight the shift to renewables. The International Energy Agency (IEA) has recently published in its market report series “Renewables 2017”. This provides a detailed market analysis and overview of renewable electricity capacity and generation and biofuels production as well as a forecast for the period between 2017 and 2022. Secondly, the 2017 edition of the “World Nuclear Industry Status Report” (WNISR) has just been published. As has been discussed previously in these columns, this is authored by anti-nuclear people but makes a good case, in both numbers and words, that renewable energy is taking over the world and that nuclear is on its way out.

One problem with such publications is the way in which they are reported in the media. There is confusion over the differences between energy and electricity, and generating capacity versus electricity production. Unfortunately, the authors of the reports do little to prevent this. The failure to identify whether it is energy or electricity that is being discussed bedevils much comment and discussion in the energy world, and is common even by sophisticated commentators. Despite the rapid advances in power generation, wind and solar still constitutes only a few percent of overall world energy production. Only 25-30% of the world’s energy is delivered through electricity, so the growing share quoted for renewables is often an overstatement of any real energy transition. The transition has to become better established in the transportation and industrial sectors if it is to be real. One interesting area that gets forgotten is hydroelectric power, which still dwarfs wind and solar power today. It also has good growth prospects in some areas of the world, but is not accepted by some parties as “green”.

In addition, pumped storage power stations account for about 90% of electricity storage availability worldwide, despite all the publicity about the advances in batteries.

However, it is in the distinction between capacity and production that most of the misinformation lies. Renewables advocates like to talk about capacity because the numbers look more impressive, but this obscures the fact that wind turbines are operating only perhaps 30% of the time and solar only 15%. Renewables dominate numbers on electricity capacity increases, but do not look so impressive when one examines power generation. The capacity factor also shifts attention from the obvious weakness of most renewable technologies, in that they are intermittent and require backup capacity or storage. As renewable production gets higher, this becomes a bigger issue. The latest bids for offshore wind power in the UK are at significantly lower prices than is to be paid for the electricity from the new Hinkley Point C nuclear plant, but this is not comparing like with like. It is irregular and unpredictable supply against reliable. For a proper comparison, each technology should be assessed on the cost of 100% reliable supply. Effectively, each should have to buy insurance for when it is not operating. This would be much more expensive for renewables than for nuclear (or for coal, oil or gas generation for that matter).

Winds of change in the USA

Two recent policy corrections to the advance of renewables are coming from the US government. These are mainly directed at supporting the struggling coal industry, but in combination they should favour nuclear too. Repealing the Clean Power Plan, brought in by the Obama administration, will not adversely affect nuclear because it never offered much help, particularly to the struggling plants already in operation.

The more important measure is that Energy Secretary Rick Perry has asked the Federal Energy Regulatory Commission to regulate pricing so that coal and nuclear power plants that keep at least 90 days of fuel supply on site can recoup their full costs. Perry said, “The continued closure of traditional baseload power plants calls for a comprehensive strategy for long-term reliability and resilience.”

This is a correction to power markets that do not value the reliability of nuclear power and answers pleas that the Nuclear Energy Institute in Washington DC has been making for some time. Along with market interventions like the contracts for difference (effectively guaranteed prices) for power in the UK, this is a sign that countries are moving away from the pro-market mantra that has dominated power market developments. They are returning towards a degree of energy planning by the state, or at least finding a way to value the steady reliability of power generation.

The environmental movement in the US will put up strong opposition to both measures, which may be successful. Interestingly, they are in alliance with the gas industry on Perry’s proposal on cost recovery, as it will be adversely affected by payments to coal and nuclear plants, which can store fuel as prescribed. Gas interests in the USA have been allied with renewables for some time in trying to transform US power supply, with a fossil fuel technology trying to hide behind something environmentally benign. Their lobbying will likely be focused on the advantages to nuclear, as they believe it is a more likely long-term competitor than coal, which most people (apart from perhaps President Trump) believe is truly on the way out.

The jury remains out on the German Energiewende (‘energy transition’). Opponents point to rising power prices and the failure to cut carbon emissions. There is a question as to what the policy was really designed to do. For some people, the most important thing was to get out of nuclear power and this is happening. For others, it was to destroy the big industrial interests like E.ON and RWE who dominated power supply, in favour of more localised supply. This has happened too. But on carbon emissions and economics, things don’t seem to be working out as many people hoped. One question that must be answered is whether an energy transition to intermittent renewables inevitably involves a reduction in material living standards.

Advocates of wind and solar power repeatedly argue that the new energy economy creates a lot of jobs, in manufacturing turbines and solar cells and then fitting and maintaining them. There are also employment opportunities (on which they focus rather less) in supplying the raw materials. But all these jobs cost money and make the overall economics of an energy transition questionable, particularly if one adds in the costs of supplying backup power and of storage for when wind or solar are not available. As the share of renewables in electricity supply increases, the quoted costs are falling, but the issue of intermittency won’t go away and the costs of coping with it will likely rise sharply.

Advocates of the energy transition will argue that although it may be more expensive in the shorter term, as has been the experience in Germany, the price is worth paying for a transition to a completely different type of economy. It will be based on much smaller scale, decentralised production than we have become familiar with, and the shift away from manufacturing to services will continue. But it is difficult today to see how we can do without high density sources of energy, from fossil fuels or nuclear power. In power generation, assuming that battery and other possible forms of storage make huge advances, it may be possible to envisage even big cities eventually becoming powered completely by wind and solar power. Elsewhere, for example in aviation and in many industrial applications, it is much harder to envisage a transition taking place. At the very least, it is going to be expensive.

Future for the next generation

In the developed world, there is already a problem of intergenerational equity, with younger people feeling at an economic disadvantage to older generations. The argument is that the latter have bought up all the houses and apartments and have good pension entitlements, which may not be available to younger people. The employment market has also changed from the steady, safe jobs of the past to a much more dynamic alternative, with less certainty and security.

The argument can be taken further, to suggest that people who are 50-plus have benefited from an era where it was acceptable to exploit high energy density fossil fuels to stimulate economic growth and so material living standards rose sharply. This is no longer available to the younger generations as the environmental consequences have become apparent. Moving towards wind and solar power is probably going to be costly in financial terms. Young people in their 20s today may well struggle to achieve the same living standards as their parents and even their grandparents. Nuclear advocates will argue that there is a choice in this. Nuclear can offer a replacement for fossil fuels that has benign environmental impacts and can be used for power generation, a shift to electric vehicles, and in industry through production of process heat. The economics may be questionable, but this ought to be solvable if public acceptance can be achieved and large-scale new-build programmes re-introduced. If this can happen, there may be no need to accept the adverse economic consequences of a shift towards renewables.

The US example above suggests that the industry is making a huge mistake in concentrating on the environmental argument for nuclear. This has had unexpected negative consequences and even stimulated the rush towards renewables. Nuclear’s unique selling proposition (USP) has always been that it produces a huge amount of energy from a very small amount of raw material. It can therefore produce lots of very reliable power that can meet growing requirements as more of the world’s energy needs to be delivered via electricity and urbanisation spreads to the developing world.

The problem, of course, is the paradigm of fear that surrounds nuclear, and is arguably becoming even more pervasive. One example is the recent switch in energy policy towards phasing out nuclear in South Korea. Nuclear fear is also closely connected to the economics of new plants. If the cost levels we have seen for new reactors in Europe and North America are going to be the rule in the future, there is little chance that nuclear will be a viable option.

Steve Kidd is an independent nuclear consultant and economist with East Cliff Consulting. The first half of his career was spent as an industrial economist within British industry, followed by nearly 18 years in senior positions at the World Nuclear Association and its predecessor organisation, the Uranium Institute.