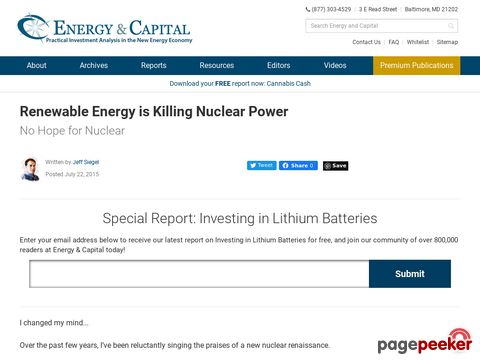 No Hope for Nuclear

I changed my mind...

Over the past few years, I’ve been reluctantly singing the praises of a new nuclear renaissance.

I say reluctantly because I’m not actually a fan of expanding nuclear power. It just seems like a costly and superfluous agenda, as the trifecta of energy efficiency, storage, and renewable energy technologies is simply economically superior to nuclear.

However, I never really had much more than a hunch that this thesis made sense. In other words, I lacked enough data to back my argument.

And to be honest, based on the amount of nuclear that’s been in development all across the globe, it was hard to deny that the nuclear power industry was chugging along wonderfully.

But all that changed last week after I read the latest World Nuclear Industry Status Report, which, to be honest, does not paint a bullish picture for nuclear.

Now, before I go any further, understand that I’m not saying nuclear is dead. On the contrary. Billions upon billions of dollars continue to flow into the space, and I’ve even personally taken positions in companies that have a piece of the action.

But today, I’m not focusing on quick scores. Instead, I’m focusing on the next five to 10 years.

You see, since 2005, back when I first started covering renewables, the renewable energy industry has been growing at light speed. If you’re a regular reader of these pages, you’re fully aware of this reality, as I’ve dedicated dozens of articles to it — complete with plenty of objective, peer-reviewed, factual data to back up the claim.

The bottom line is that renewable energy, energy efficiency, and energy storage technologies are continuing to enjoy rapid cost reductions and huge increases in efficiencies and overall production.

Nuclear? Not so much.

In fact, when you look at the advancements that have been made in renewable energy, energy efficiency, and energy storage just over the past five years and then look at the lack of advancements we’ve seen in nuclear over the past 30 years, well, it doesn’t take a rocket scientist to know that any chance of meaningful nuclear power development has been completely thwarted by the new renewable energy revolution.

Of course, it’s one thing to tell you this and another altogether to show you.

So here are nine reasons nuclear power may be doomed, thanks primarily to the boom in renewable energy...

1. In 2014, China, which has more nuclear power plants in development than any other country, spent about $9 billion on nuclear, while it spent $83 billion on wind and solar. 2. Despite China being the biggest builder of nuclear power in the world, its non-hydro renewable energy fleet already produces more energy than its nuclear capacity. 3. China, Germany, Japan, Brazil, India, Mexico, the Netherlands, and Spain all generate more electricity from non-hydro renewables than from nuclear. These eight countries represent about 45% of the world’s population. 4. Because the cost of maintaining nuclear power plants is so burdensome, EDF, the largest nuclear operator in the world, now needs a tariff increase to cover its operating costs. 5. In Sweden, four nuclear units are being shut down because of lower-than-expected income from electricity sales and higher investment needs. 6. In the U.S., utilities are trying to negotiate with state authorities for support schemes for reactors that they say are no longer competitive in current market conditions. 7. The French state-controlled integrated nuclear company AREVA, which was once the gold standard for nuclear, is now technically bankrupt after a cumulated four-year loss of $7.37 billion. 8. No single Generation III reactor has come into service in the past 20 years, as most have been delayed by three to nine years. As well, all have gone over budget. 9. In the absence of major new build programs, aside from China, the unit weighted average age of the world operating nuclear reactor fleet continues to rise and today stands at about 28.8 years. About 200 of these units have operated for more than 30 years, including 54 that have run for over 40 years. One-third of U.S. reactors have operated for more than 40 years — with no replacements in sight.

Nuclear remains relatively stagnant but with a lot of empty promises for growth, while renewables are not just gaining steam on nuclear but far surpassing it.

There’s no turning back now for renewables. Solar and wind in particular are unstoppable, and this insane growth is quickly extinguishing any hope for a nuclear renaissance.

To a new way of life and a new generation of wealth...

Jeff is the managing editor of Energy and Capital and contributing analyst for the Energy Investor, an independent investment research service focusing primarily on stocks in the oil & gas, modern energy and infrastructure markets. He has been a featured guest on Fox, CNBC, and Bloomberg Asia, and is the author of the best-selling book, Investing in Renewable Energy: Making Money on Green Chip Stocks. For more on Jeff, go to his editor’s page.