French utility EDF is playing roulette with its nuclear reactors but the “cards are stacked” against the firm as lengthy outages due to ageing units increase the potential for supply squeezes and price spikes. 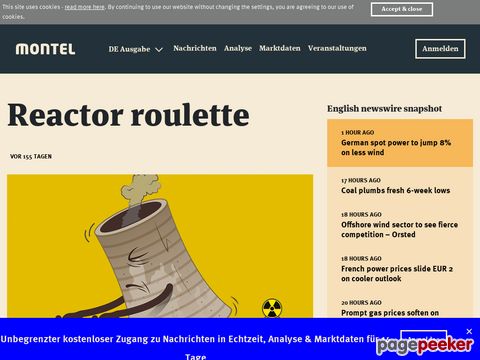 It is no secret EDF often delays the scheduled restart of its reactors following maintenance outages but it has become increasingly difficult for market participants to predict just how long units will remain offline, with the country’s nuclear output hitting a three-year low in 2019.

The market is particularly sensitive to restart delays as they can drive up power prices not just in France, where nuclear accounts for 72% of total power output, but also right across Europe. This was the case in winter 2017-18 when outages at several French reactors created fears of a supply squeeze.

“Everyone knows that in general they [the restarts at French nuclear plant] will take much longer. And the context that makes it 20 or 200 days longer is anybody’s guess,” says Acousmatics analyst Paolo Coghe.

“It started looking a bit better at the end of 2018 after all the steam generator issues [at French reactors] and then suddenly, in terms of general nuclear availability delays, 2019 was a proper disaster.”

According to De Vigan’s calculations, the gap between actual French nuclear availability and its estimated level 30 days before was as wide as 11 GW in November last year.

In 2019, six out of seven French reactors stopped for 10-year inspections saw their outages extended with Flamanville 2 (1.3 GW) still offline more than nine months after it was scheduled to return to service.

Taken together, the 10-year inspection outage extensions amounted to 422 days as of the end November, EDF data showed.

Seven more reactors are due offline this year for such inspections – typically scheduled to last 90 days and ensure they are fit for service – with half of the French fleet due to undergo their fourth 10-year inspections over the next five years.

The utility nevertheless predicts output will be in line with forecasts this year, though experts say that as well as more stringent safety demands – following the 2011 Fukushima disaster – the units are struggling with the effects of ageing, now 34 years old on average.

“It is like a 40-year-old car,” says independent nuclear energy consultant Mycle Schneider. “You repair a light switch but then you find a lot of corroded metal, so you have to go back and repair that.”

“Once you reach the end of scheduled lifespans failure rates are higher,” he adds.

This year’s 10-year inspections will be tough as they concern reactors with different capacities (900 MW, 1,300 MW and 1,500 MW units) and different ages, says Coghe.

“The cards are stacked against EDF because of the need to be more thorough. Sometimes it’s uncharted territory [and] all this leads to more delays.”

“It’s very likely we will see the same problem [of delays] this year,” says De Vigan. “I think the reality is that EDF and [French nuclear safety authority] ASN don’t have enough proper nuclear experts. People have retired.”

The company also faces “contingencies” or setbacks that are “out of its control”, says Coghe.

EDF has also blamed in part problems with back-up generators as the cause of lengthy outages at Flamanville 2.

Yet the utility has failed to properly inform the market about the reasons for the long delays, says De Vigan.

“The only thing we are seeing is major delays compared to what is published, which is annoying because under [EU regulation] Remit one would expect more accurate data.”

This is dangerous because it leaves the door open to accusations the firm is manipulating prices by deliberately keeping reactors offline, he adds. “People are wondering.”

EDF’s head of nuclear output, Stephane Feutry, concedes his firm’s outage schedules are the topic of “a lot of internal talk” but insists that “start-up dates are established according to a work schedule that is known with sufficient margins”.

“If we communicated longer dates systematically, for a large number of reactors, this would also be wrong. And we would have to announce earlier dates along the way.”

EDF carried out up to 20,000 activities during the fourth 10-year inspection at Tricastin 1, Feutry says, adding it has learnt lessons so that “our next inspections will be better”,

For consultant Schneider, whose annual World Nuclear Industry Status Report found there were 5,000 outage days at French reactors in 2018, the problem is also political.

“The big problem is French nuclear policy… EDF has to sell the idea that its fairly straightforward to extend reactor lifetimes,” he says.

“It does not have the funds to replace old reactors with new ones. So, it has a choice – either extend reactors or find another energy policy.”

This year it “should be able to produce what we had planned for 2019”, despite the closure of its oldest reactors at Fessenheim this spring, says Feutry.