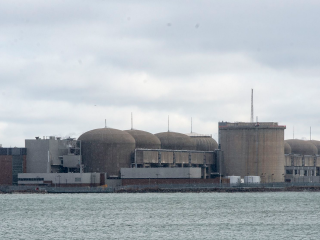 Minister of Natural Resources Seamus O’Regan has unveiled a new plan to advance the development of new nuclear reactors that was notably short on dollars and specifics.

The announcement capped a week showcasing the federal government’s bid to achieve net-zero greenhouse gas emissions by mid-century. But unlike the federal hydrogen strategy, which included $1.5-billion in funding to encourage production in low-carbon fuels, the government unveiled no new money for small modular reactors (SMRs) on Friday.

Instead, the government vowed to continue supporting a “shared effort to make SMRs a reality,” building on a plan from two years ago. Mr. O’Regan said the next step was “taking the show on the road,” meeting with mayors from communities that have nuclear reactors and others interested in doing so. He said he expects SMRs will be connected to the grid between 2030 and 2050.

The lack of specifics highlighted the fact that SMRs are in early stages of development. Yet their success is widely regarded as crucial for Canada’s nuclear industry, which employs 30,000 and contributes $6-billion to the economy, according to Natural Resources Canada.

Mr. O’Regan said nuclear technology is indispensable to the climate plan. “We don’t see a path that we can reach net zero by 2050 without nuclear,” he said.

SMR lacks a universally agreed definition, and the Canadian Nuclear Safety Commission regards it as a marketing rather than a technical term. Proponents pitch SMRs as an alternative to larger units such as Candu reactors at Canada’s four operating nuclear power plants. (Individual SMRs would generate up to 300 megawatts each, as opposed to double or triple that amount in traditional reactors.)

SMRs would be built in factories rather than on-site. Enthusiasts say they might feature simpler designs, lower up-front capital costs and require fewer workers to operate than traditional reactors. More than 100 designs are proposed worldwide.

According to a 2018 presentation by the Canadian Nuclear Safety Commission, many SMR designs are based on concepts developed in the industry’s formative years from the 1950s to the 1970s. Many couldn’t compete with water-cooled technologies, which came to dominate. But some are being revisited in light of decades of technological advances.

In October, Paris-based Mycle Schneider Consulting surveyed progress in developing SMRs in its annual status report on the global nuclear industry. It found little had changed since reviews in 2015 and 2017.

Nevertheless, Ontario, New Brunswick, Saskatchewan and Alberta have signed a non-binding agreement to co-operate on advancing SMR development and deployment. In November, Ontario Power Generation announced that it plans to build an SMR at its Darlington Nuclear Generating Station as early as 2028.

Observers said the lack of new federal funding was noteworthy. The plan “is not really serious, as far as I can make out,” said M.V. Ramana, a professor in the School of Public Policy at the University of British Columbia. “It’s not clear that this is going to be leading to any SMR development anytime soon.”

Dr. Ramana said historically it has taken 20 to 25 years to move from a conceptual reactor design to a constructed plant. He pointed to NuScale Power, which in August announced its SMR had become the first to receive design approval from the U.S. Nuclear Regulatory Commission.

“They have spent about US$1-billion so far on their design, and they are expecting to spend at least another $500-million before they can start construction,” he said. “That’s the sort of magnitude of investment we should be expecting to see before you translate one of these paper designs into an actually constructible design.”

“That is really peanuts compared to what is actually required,” Dr. Ramana said.

The federal government’s last big-ticket nuclear initiative was the Advanced Candu Reactor in the 2000s. None were ever built.

John Gorman, chief executive officer of the Canadian Nuclear Association, said the Advanced Candu failure isn’t pertinent “to the sort of environment we find ourselves in today” because nuclear technology has advanced and the need to address climate change has increased. SMRs could develop very quickly, he added, but only with federal “investment dollars to match what the utilities are putting on the table.”

“We have 12 different technologies that are going through the review and licensing process right now in front of the Canadian Nuclear Safety Commission,” he said. “Some of those are in very late stages of approval … these things are not even a decade off.”

Mr. O’Regan said Canada is not starting from scratch. “Canada stands amongst a small elite group of Tier One nations that have the full spectrum of nuclear capabilities,” he said. “Everything from energy to health care, from our homegrown Candu reactors and uranium to expert operators, world class laboratories and leading scientists.”