On the 31st anniversary of the Chernobyl disaster, there is still no consensus on what to do about nuclear waste, writes Ruby Russell. 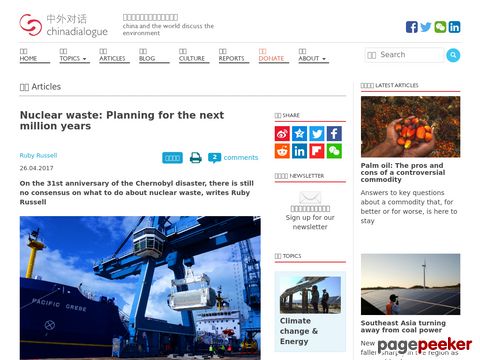 Source : Nuclear waste: Planning for the next million years https://www.chinadialogue.net/article/show/single/en/9755-Nuclear-waste-Planning-for-the-next-million-years

It’s been over 60 years since the first nuclear power plant was switched on in Russia and exactly 31 years since the Chernobyl nuclear disaster. Yet despite the decades-long history of nuclear power, most countries still haven’t agreed on a way to safely store nuclear waste.

Leading the way is Finland with the world’s first permanent repository for spent nuclear fuel. High-level radioactive waste is to be buried 400 metres deep in the granite bedrock of Olkiluoto Island off the Finnish coast, where its operators claim it will be secure for the next 100,000 years.

Governments, on the whole, aren’t good at long term planning though. And this is a major problem for the nuclear industry where eventualities must be planned for in terms of hundreds of thousands, or even millions, of years.

Teams of artists and philosophers are even debating how to mark repository sites to warn off future generations who may be as removed from us as we are from the first homo sapiens to arrive in Europe.

Even the more easily grasped timescales involved in nuclear waste disposal pose huge technical, economic and social challenges. Finland is to start loading the Olkiluoto repository in 2020 and the process is expected to take 100 years. That may seem like a long time, and it is considering that the first observed nuclear reaction was made less than 100 years ago in 1919.

Sweden, which is pushing forward with the same technology as Finland, is the only other European country close to such an advanced stage of planning. Favourable geological conditions and relatively small quantities of just one type of waste – spent fuel, without the additional problems of reprocessed waste – mean both countries have advantages over other nuclear nations.

For the most part,says Stephen Thomas, emeritus professor of energy policy at Greenwich University, high-level radioactive waste is lying around waiting for a solution.

“Around the world, everybody is extending the spent fuel storage and reactors. Find me a reactor that’s been in operation for 20 years and I’ll find you a plant which has had its spent fuel facility increased. Every one. There’s nowhere to put it,” says Thomas.

Back in 1977, Germany was seen as a pioneer of disposal solutions when it began exploring a former salt mine at Gorleben as a possible repository. From the start, locals protested vehemently. A decades-long battle ensued with intense debate over whether the site was geologically suitable. Some experts claimed that with its location in a sparsely populated area close to the then border with East Germany, the site was selected more for political than scientific reasons. In 2000 the government put a moratorium on the investigation.

A bill passed this year will see Gorleben back on the agenda as a possible waste site, in a search that views the country as a “blank map”, with salt, granite and clay sites all to be considered.

Officially, a site is to be identified by 2031 and built by 2050. But the state of Saxony is already pushing to be excluded from the process and some experts say this bid looks highly optimistic.

In the UK, exploration of a potential site conveniently close to the Sellafield decommissioning and reprocessing site – home to by far the country’s worst nuclear waste problem – stalled and was cancelled following a public and scientific consultation process.

In France, the plan for a clay repository near the village of Bure is more advanced than most. French nuclear agency ANDRA plans to have it ready by 2035. But observers say there has been a lack of public consultation and public protests are heating up ahead of an upcoming parliamentary vote over the site’s future.

Besides the technical and political issues surrounding final disposal there are also massive economic challenges.

In Germany, nuclear power plant operators are largely responsible for decommissioning reactors once they are switched off – this is where spent fuel is removed and sites dismantled – a process that takes decades in itself.

Under an agreement reached last year, waste disposal is now the responsibility of the state. Utilities are to pay 23.6 billion euros (177 billion yuan) into a state-administered fund to cover this. But experts worry that ultimately, taxpayers will be left footing the bill.

“For all the waste management and disposal of waste there is no technical concept and so you cannot estimate costs,” says Wolfgang Irrek, professor for energy management at Ruhr West University of Applied Sciences in Germany. Instead, the calculation is based on 20-year-old estimates for the Gorleben site.

Some experts say final disposal is a bit of a red herring in any case. As appealing as the idea of settling the matter once and for all might be, questions have been raised about the long-term security of even the Finnish project.

“It’s very arrogant, scientifically, to say today we have safe disposal for tens of thousands of years,” says Mycle Schneider, an independent nuclear policy analyst and lead author of the annual World Nuclear Industry Status Report. “I am not convinced geological storage is good forever – I have not seen the argument made conclusively. It’s too early to say.”

Instead, Schneider advocates a focus on ensuring that interim storage is up to the job, which, for the most part, it isn’t.

“We have got into problems with waste because it has been packaged on the assumption that it would go in the ground at a certain time, and it hasn’t, and the packaging has degraded,” Thomas says.

The UK and France have used wet storage for spent nuclear fuel, meaning the waste is kept in pools for long periods of time. Schneider says if there is anything to be learned from the European experience with nuclear waste it’s to take the German route of getting the cooled waste out of the water and into dry storage as quickly as possible.

“There is absolutely no doubt that dry storage is much safer and much more secure than pool storage,” says Schneider. “If you lose the water you are in trouble because the fuel will heat up. Depending on the age of the fuel, you might get fuel fires that will dwarf the nuclear accidents we have seen so far.”

He points to the Fukushima disaster, where it was initially unclear if a spent fuel fire was on the cards; a scenario which would have called for the evacuation of at least 10 million people.

In the UK, Andrew Blowers of independent expert group Nuclear Waste Advisory Associates says the locations of planned reactors pose their own set of problems.

“A lot of dangerous spent fuel is going to be stored on new-build sites which are in vulnerable coastal locations, which stacks up to a huge problem for the next century with climate change,” says Blowers.

Tip of the iceberg

And all this concerns only a tiny fraction of the overall radioactive waste problem. “High-level waste represents the smallest volume,” says Schneider. “The biggest volumes are [found] the lower you go in the contamination levels. A single uranium mine, like the German Wismut, can generate hundreds of millions of tonnes of waste.”

Decommissioning generates huge volumes of contaminated material. Intermediate-level waste storage repositories in Germany have also been fraught with technical and public acceptance problems, while decommissioning in the UK has seen costs spiral out of control.

“Britain is an example of how to make provisions for decommissioning wrong – we have made every mistake it is possible to make and have ended up with a nuclear authority that has no money,” Thomas says.

Germany has decided to phase out nuclear power altogether. Having defined volumes of material to deal with should give it some advantage, but Thomas says there is still too little experience of decommissioning to really know what the country is in for.

“The amount of decommissioning that has gone on in the world is negligible. I think there are six plants that have been fully decommissioned that operated for a decent amount of time.”

Still, Blowers says Germany’s got one thing right. “What we don’t want is more nuclear waste created when we are not at all sure what we are going to do with what we’ve already got.”