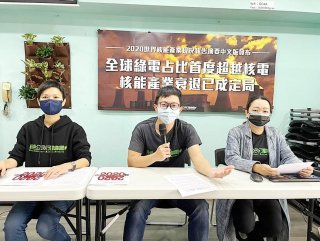 Premier Su Tseng-chang (蘇貞昌) yesterday said that reviving the Fourth Nuclear Power Plant project would be impossible, adding that the government has always believed that the power plant should not be started.

Su made the remarks in response to questions by Chinese Nationalist Party (KMT) Legislator Lu Yu-ling (呂玉玲) about a campaign by environmentalists to hold a referendum on a government plan to build a liquefied natural gas (LNG) terminal off the coast of Datan Borough (大潭) in Taoyuan’s Guanyin District (觀音) on the grounds that it would damage the algal reefs there.

Lu asked if the mothballed Fourth Nuclear Power Plant in New Taipei City’s Gongliao District (貢寮) would be a backup plan if the LNG project is scrapped.

The premier said the nuclear power plant project was suspended during the administration of former president Ma Ying-jeou (馬英九), and that the disposal of nuclear waste from the nation’s first and second nuclear power plants remains a problem, so it would be impossible to restart construction of the fourth plant now.

In related news, the Green Citizens’ Action Alliance yesterday said the share of non-hydro renewables in global electricity generation exceeded that of nuclear power for the first time in 2019, implying that nuclear energy is a declining industry, and that Taiwan should push its energy transition policy forward.

The environmental group cited data from the World Nuclear Industry Status Report 2020, published in September last year, of which it was authorized to release a summary in traditional Chinese.

The 361-page report provides an assessment of “the status and trends of the international nuclear industry and analyzes the additional challenges nuclear power is facing in the age of COVID-19,” with contributions by seven interdisciplinary experts from Canada, France, Germany, Japan, Lebanon, the US and the UK, the report’s Web site says.

Alliance researcher Chen Shi-ting (陳詩婷) said the contributors included Mycle Schneider, an independent international energy and nuclear analyst and consultant who is also the convening lead author of the report; and Tadahiro Katsuta, an associate professor at Meiji University in Tokyo, Japan.

Citing the report, alliance researcher Dennis Wei (魏揚) said the share of nuclear energy in the global electricity generation mix peaked at 17.5 percent in 1996 and dropped to only 10.35 percent in 2019.

That year, wind and solar power generation increased by 13 percent and 24 percent respectively, while nuclear energy rose by only 3.7 percent, with China accounting for half of the increase, Wei said.

Moreover, the cost of nuclear power has continued to increase, rising by 26 percent from 2009 to 2019, while the cost of natural gas dropped by 33 percent, solar power by 89 percent and wind power by 70 percent, he said.

Total investment in renewable energy in 2019 exceeded US$300 billion, while investment in nuclear power was only about US$31 billion, showing that nuclear power is losing competitiveness in the global energy market, and that except for China, building nuclear reactors is not a global trend anymore, Wei said.