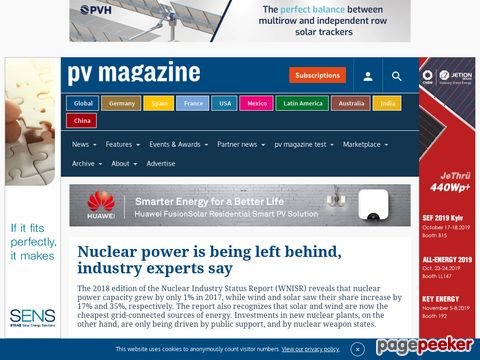 “The relative prices of electricity generation sources have switched, and solar and wind energy are now, in most countries, the cheapest grid-connected sources of energy.”

This statement, though it sounds like a press release from a renewable energy trade body, or a campaign from an environmental group, is one of the main conclusions of the 2018 edition of the Nuclear Industry Status Report (WNISR), which is published each year by French independent consultant specializing in nuclear energy, Mycle Schneider.

It is said to be based on a third-party-perspective, aimed to open discussion on the sustainable development of nuclear energy and a rational approach to thinking of the nuclear industry at large.

According to the authors, nuclear power will have few chances to compete in the future, if it does not prove to be able to develop commercially available, smaller, factory-assembled, modular reactors, at lower cost, with reliable, passive safety features and, above all, if it is not able to attract private investors; “the prospects of which seem remote,” according to the report.

The share of nuclear in global power production has dropped significantly, from 17.5% in 1996 to 10.3% in 2017. “It is instructive to note that the construction of new nuclear power plants is mostly driven and backed by states, and not by the private sector,” the report further notes. On top of this, most state proponents of nuclear power programs are nuclear weapon states.

Support for nuclear power projects, the document says, is being given by countries that are prepared to offer public support, and often this is facilitated by rent-seeking and corruption. Especially due to their large size (between 1 GW and 1.6 GW), nuclear power facilities are said to be an unviable solution for many African developing countries, the power systems of which are usually small and not equipped to integrate big capacities.

Furthermore, the report highlights that solar and wind saw its share in the global power mix increase by 35% and 17% in 2017, while the growth of nuclear power was of only 1% last year. Only four reactors became operational in 2017, of which three were in China and one in Pakistan, while construction started on another five plants worldwide.

Yet, as of mid-2018, 115 units were undergoing decommissioning, although so far, only 19 units have been fully decommissioned: 13 in the U.S., five in Germany, and one in Japan.

But what is really hurting nuclear power, the experts say, is economics. “Auctions resulted in record low prices for onshore wind (<US$20/MWh) offshore wind (<US$45/MWh) and solar (<US$25/MWh), which compares with the “strike price” for the Hinkley Point C Project in the U.K.(US$120/MWh),” the authors of the report wrote.

The report also stresses how nuclear power may also be impacted by global warming, as the cooling of the reactors requires large amounts of water, and governments, especially in Europe, are introducing operational restrictions to avoid the excessive heating of rivers. “While in most cases, regulations required to lower the output of the reactors by 10 percent or so, some reactors were shut down, including at least four reactors in France, to deal with the problem,” the report notes.

Although this heating issue is considered secondary, the experts warn that the “malaise” about the uncertain future of the industry remains “deep and disconcerting.”

It is also interesting to note that, writing about France’s nuclear plans, the authors of the document highlight the ambiguity of its state-owned utility, EDF, which “seems to live in a different world,” as its envisages “certain closures” of nuclear reactors only starting 2029, while the French government has clearly said it will reduce the share of nuclear power from around 71% currently, to 50% in 2025. The same EDF, on the other hand, has announced a 30 GW solar plan that is aimed at partly offsetting the loss of this capacity.

As for the Hinkley Point nuclear plant in the U.K., which is also being developed by EDF (although its construction has not started yet) and is expected to sell power at $115–120/MWh under a Contract for Difference (CfD) deal, the report stresses that UK National Audit Office (NAO) has already defined it as “risky and expensive project with uncertain strategic and economic benefit.”

In order to raise funds for the project, EDF announced its intention to sell non-core assets worth $11.4 billion, with the project being finally approved in September 2016. “The constant decline in energy and electricity consumption in the U.K. do not favor the economic case for nuclear new-build,” the report suggests.