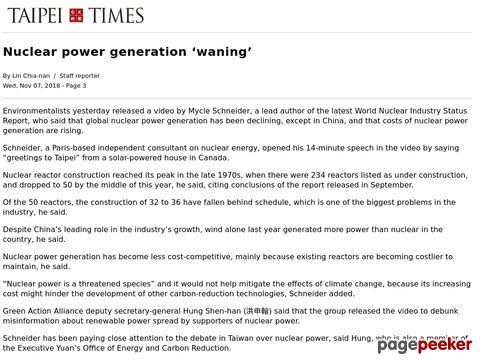 Schneider, a Paris-based independent consultant on nuclear energy, opened his 14-minute speech in the video by saying “greetings to Taipei” from a solar-powered house in Canada.

Nuclear reactor construction reached its peak in the late 1970s, when there were 234 reactors listed as under construction, and dropped to 50 by the middle of this year, he said, citing conclusions of the report released in September.

Of the 50 reactors, the construction of 32 to 36 have fallen behind schedule, which is one of the biggest problems in the industry, he said.

Despite China’s leading role in the industry’s growth, wind alone last year generated more power than nuclear in the country, he said.

“Nuclear power is a threatened species” and it would not help mitigate the effects of climate change, because its increasing cost might hinder the development of other carbon-reduction technologies, Schneider added.

Schneider has been paying close attention to the debate in Taiwan over nuclear power, said Hung, who is also a member of the Executive Yuan’s Office of Energy and Carbon Reduction.

Nuclear power supporter Liao Yen-peng’s (廖彥朋) claim that toxic coating on solar panels might pollute water supplies is false, Hung said, referring to Liao’s remarks during a debate on Sunday about a pro-nuclear referendum that he helped initiate.

The referendum asks voters if they agree to abolish Article 95-1 of the Electricity Act (電業法), which stipulates that all nuclear power generation facilities should be decommissioned by 2025.

The environmentalists called on voters to evaluate energy policies based on scientific information and reject the pro-nuclear referendum that is to be held alongside the Nov. 24 nine-in-one elections.