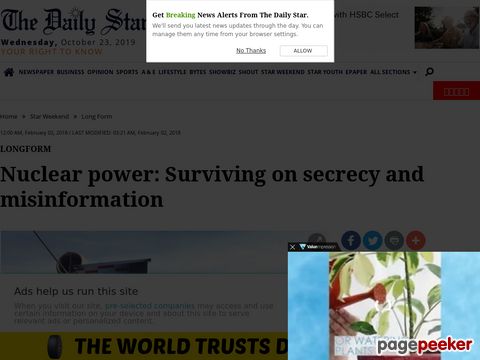 While countries like Germany, Belgium, France, and Japan are trying to find an escape route from nuclear power, Bangladesh is taking two steps back. Although the 2,400-MW Rooppur nuclear power project has already garnered some support, there are critical issues that need to be addressed for the country’s safety and security. We need to establish whether the claims of cheap electricity, people’s acceptance, risk-free waste management and use of safe technology are simply rhetoric or not. We also need to draw a careful line between fact and propaganda.

Technology is not the answer

Technology is ever-changing, ever-developing. Thus, the glorification of the “third generation plus” reactor for Rooppur Nuclear Power Plant (NPP) must be challenged.

Russian company Rosatom won the bid to construct the plant in Bangladesh and is now trying to sell us on “post-Fukushima technology”. But can the same company guarantee that there will not be a thing such as “post-Rooppur technology”?

4,000 lives were lost in Chernobyl. Till date, USD 188 billion has been devoted towards cleaning up Fukushima. That too in a country renowned for its technological advancement. Right now, third-generation technology might be the latest one, but surely it’s not the last. When the Fukushima disaster happened, it had the most advanced technology yet, but that did not avert disaster.

Advanced technology could be their selling point, but it does not truly diminish any of our concerns. In fact, the question we should all be asking is: why is such “safe” technology in such dire need of the protection of the indemnity law—the Nuclear Power Plant Act 2015—in the case of any accidental loss of anyone related?

Radiation leaks are also very common in nuclear power plants, but the concerned authorities have always managed to shrug off the problem. That’s how this industry is still surviving. Only last October, the IRSN, France’s public authority on nuclear safety and security, identified a cloud of radioactive isotope ruthenium-106 in European territory originating from a Russian nuclear facility. But Russia’s nuclear agency has refused to accept responsibility (The Guardian, November 21, 2017).

In India, on the other hand, 1,733 scientists and employees who used to work in nuclear establishments and related facilities died between 1995 to 2010. Most of the victims were below 50 years of age (Rediff, October 4, 2010). However, there was neither any fact-finding committee nor any public disclosure about such a large number of untimely deaths in so-called “safe” nuclear facilities. The government of India has formed three committees so far for auditing the safety and security standards of nuclear power plants, but the recommendations, which require millions of dollars, are yet to be implemented.

Too expensive to matter?

The once-rhetorical claim made by the nuclear industry of making electricity “too cheap to matter” has already proven wrong and turned into a case of “too expensive to matter.” In fact, it matters so much that the world’s largest nuclear builder, Westinghouse, filed for bankruptcy protection in the US last year (The Guardian, March 29, 2017). And according to the latest World Nuclear Industry Status Report (WNISR), the French state-owned nuclear builder and service company AREVA had accumulated USD 12.3 billion in losses over the past six years and was at last bailed out by the government with a cash injection worth USD 5.3 billion and subsequently broken up.

Such extravagant expenditure is not new for the nuclear industry. Rather it has been surviving on state-sponsorship since its inception. But now the price of this arrangement is felt so heavily by some countries that they have decided to pull the plug on it. For example, Vietnam decided to backtrack from nuclear power projects even after its deals with Russia and Japan—not because of baseless fears, but because the costs were escalating at such a rate that within just seven years the projected costs doubled (Reuters, November 22, 2016).

Costs rising exponentially is nothing new. The construction of 75 nuclear reactors was started in the US between 1966 and 1976. In each of these cases, the actual construction cost was found to be 300 percent higher on average than the estimated cost at the beginning (Ramana M V, 2009). Similarly, the construction of the 1,600 MW Flamanville nuclear power plant has already required three times the predicted cost till date and is yet to be completed (Reuters, December 4, 2012).

Bangladesh’s Rooppur power plant is no exception. Even before construction started, the project cost increased from USD 4 billion to USD 12.65 billion within just three years of the time frame (WNISR 2017). As the contract with Russia is not a fixed price contract, but a cost plus one, the vendor retains every right to come up with a revised budget in coming days. 90 percent of its required budget is being taken from Russia on credit at an interest rate of the Intercontinental Exchange London Interbank Offered Rate plus 1.75 percent, which is not only going to increase national debt, but also impose a great threat on our economy as a whole. Worrying still, the government has not disclosed the estimated price per unit of electricity from this plant after accounting for fuel cost, waste management and disposal cost, and decommissioning cost.

While the government is touting the international standards and guidelines that will be abided, in reality, without public participation and public disclosure of the much needed Environmental Impact Assessment (EIA) and without asserting the guideline of the International Atomic Energy Agency (IAEA), these claims are nothing but sheer rhetoric.

The people of Pabna, Bheramara, Lalpur, Kushtia, and Ishwardi all live within 30 kilometres of the proposed Rooppur nuclear power reactor. Has the government informed them of emergency evacuation? Is there any plan compliant with international safety and security standards to build the infrastructure required to evacuate millions of people within hours? Would it be possible to arrange its construction within the next few years?

Nuclear waste management is another concerning issue, which needs special infrastructure as well as separate budget allocation. But nothing is on the scene except a draft agreement to take back the spent nuclear fuel to Russia (Dhaka Tribune, March 18, 2017). Unfortunately, that’s not the end of the story. Russia can take back the spent fuel, reprocess it for fast breeder reactors, but it has to give it back the nuclear waste back to Bangladesh because according to the law of the Russian Federation, disposal of foreign nuclear waste is not possible in Russia (World-nuclear.org, January 15, 2018). What assurance do we have that Russia will change their law for the sake of Bangladesh and do this costly disposal free of cost? Or is Bangladesh going to be the next destination for the disposal of the Russian nuclear industry’s waste from all over the world?

The top-heavy, wasteful, authoritarian world of nuclear power is being challenged by the innovative, low-cost, democratic world of renewables. Rational societies are reaping the latter’s benefits. Germany has decided to close down all of its nuclear reactors by 2022 and replace those with solar and wind power. With the plummeting cost of renewables, they are winning (World-nuclear.org, January 15, 2018). They exported 53.7 TWh of electricity in 2016, setting a new record and are going on to become the biggest net power exporter in Europe (WNISR 2017). Renewables were the largest contributor to their power mix.

In India, solar and wind electricity is now being produced at costs below BDT 3.5 per unit and they have already set a target to install a combined 100 GW solar and 60 GW wind power plant by 2022 (Mnre.gov.in).

In Bangladesh, on the other hand, renewable energy and imported power were presented as substitutes for each other in the Power Sector Master Plan 2016 (PSMP–2016). In the whole energy mix, only 15 percent of the electricity generation target has been fixed for renewable energy or imported power capacity addition. The renewable energy based generation is shown as 7 TWh—a mere 3 percent of the total demand by 2041. The PSMP–2016 also estimated 3.6 GW of potential renewable-energy-based power generation all together. This is in sharp contrast to recent research with predicted that, only from wind power alone, Bangladesh has the potential to generate 20 GW of electricity (Saifullah et al, 2016).

Globally and locally, scholars from across different disciplines are working on developing better frameworks, methods and models of renewable energy. A group of scientists from Stanford University working extensively on clean energy, last year found that by 2050, a 100 percent renewable-energy-based solution for Bangladesh is not only possible, but is also the most economical option. According to their research, per unit electricity cost would be BDT 5.6 from renewables at the 2014 USD rate, which would save BDT 2,000 per person per year by 2050 (Jacobson et al, 2017).

The rationalisation for nuclear power hinges on a high initial cost for future benefit, but if we take into account its costly waste management, the need for decommissioning as well as loan repayment, Rooppur is little less than a future burden. Disregarding proper procedure and public consultation, the Bangladeshi government is not only constructing the 2,400 MW Rooppur nuclear power plant, but is also planning to install more such plants with a capacity of 4,800 MW across the country by 2041. Rooppur nuclear plant is not the technological milestone that it is portrayed to be. After all, how can imported technology and foreign dependency be a landmark or our nation’s scientific community? Without dealing with the contentious issues surrounding Rooppur, the plant may turn out to be the cause of endless misery for Bangladesh in the days to come.

Mowdud Rahman is an engineer and Energy Technology Researcher at the Indian Institute of Technology Bombay (IIT Bombay).

Debasish Sarker is an engineer and PhD Researcher on Nuclear Safety at Helmholtz-Zentrum Dresden-Rossendorf, Germany.