Ten years since the Fukushima disaster, expensive nuclear energy plants are being shut down across the world as renewable power prices plummet. 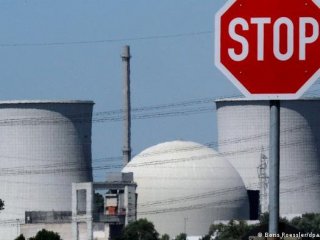 In the face of soaring gas prices in the UK, some incumbent conservative politicians are pushing nuclear energy as the savior. The argument goes that the energy source has low carbon emissions, and that new smaller reactors can more quickly be brought online.

But as the 2021 World Nuclear Industry Status Report (WNISR) that was released today confirms, uranium-fuelled energy constitutes an ever-decreasing proportion of the energy mix.

Exorbitant costs, especially compared to renewables, is exacerbating the fall-out from Fukushima that drove countries like Germany and Belgium to phase-out the fuel by 2022 and 2025 respectively.

“Nuclear energy’s share of global gross electricity generation continues its slow but steady decline from a peak of 17.5 percent in 1996 with a share of 10.1 percent in 2020,” states the report.

The comparative cheap cost of renewables is at the core of the problem. The WNISR confirms that new renewable electricity investment was above US$300 billion (€256 billion) in 2020, which is 17 times higher than the reported global investment commitments to nuclear power.

“As climate change moves up the political agenda, nuclear power is not considered in many countries to be part of the transformation of the energy sector in order to decarbonize,” said Antony Froggatt, a WNISR lead author and Deputy Director & Senior Research Fellow with the Environment and Society Programme at London-based think tank Chatham House.

Even if China — which in 2020 took over France as the 2nd highest nuclear energy producer after the US — has kept the global nuclear capacity steady, the industry is struggling to push its low-carbon bona fides and has been sidelined at the upcoming COP26 climate summit.

Nuclear energy output on the decline

Excluding China, nuclear power generation last year dropped to the lowest level since 1995, while the nuclear share of France’s electricity mix is at its lowest point since 1985, noted the WNISR.

China might be one bright spot for the industry; but there too, growth is slowing as renewables become cheaper and start to dominate the energy mix. Only 2 gigawatts (GW) of new nuclear energy capacity were connected to the grid in 2020 compared to 72 GW of wind power, 48 GW of photovoltaics and 13 GW of hydropower, according to the country’s National Energy Administration.

This is reflected in the comparable increase in capacity, with 256GW of non-hydro electric renewable power added to the global energy supply in 2020, and around 0.4 GW of nuclear energy, stated the report.

For Froggatt, a “tipping point” has been reached in some countries whereby “the take-up of renewables is such that it’s so much cheaper to build new renewables than it is to build new nuclear.”

The elephant in the room is a fast-ageing fleet of nuclear reactors — the WNISR shows that the mean age now stands at about 31 years, with one in five units at or above 41 years.

“There is not enough momentum to offset looming retirements,” said Jim Green, national nuclear campaigner at Friends of the Earth in Australia, the world’s third largest uranium producer, when explaining how fewer new plants are being built due to cost pressures.

While the world currently has 415 nuclear reactors — up seven units compared to mid-2020, mostly due to new plants being built in China — ten plants are expected to be retired annually over the next 30 years, according to Green. He estimates that at best, four new plants could be built each year, which indicates a slow if steady decline.

The nuclear campaigner notes that in the US, the Biden administration pledged to build no new reactors, due in part to failed projects in South Carolina and Georgia — the investor, Westinghouse Electric Co., lost billions before filing for bankruptcy in 2017.

While the US has promised to subsidize existing plants, Antony Froggatt says the costs for reactor upkeep and maintenance is also becoming prohibitive. The lifetime cost of building and maintaining nuclear plants has risen by 33% over the last decade, while the comparable cost for solar energy infrastructure dropped by 90% in that time, and wind by 70%, according to the 2021 WNISR.

Talk of a nuclear industry renaissance built on making the fuel an essential part of decarbonization and a low carbon energy mix no longer makes economic sense, says the WNISR lead author.

“The argument that you absolutely have to have carbon capture and storage and nuclear has significantly diminished,” he said.

’Industry on the edge of the cliff’

Nuclear also fails the decarbonization litmus test due to a lack of flexibility “to follow the demand requirements,” he noted. “You need flexible power plants that can switch on and off when needed.”

By contrast, nuclear plants need to run constantly, and often at full capacity — partly to repay the very high investment costs. These operating limitations also make the relative unit cost of nuclear energy much higher than renewables. And the cost differential is becoming starker.

When the Hinkley Point nuclear plant project in Somerset in southern England was announced in 2010, the energy price of nuclear was around a third lower than that of offshore wind. Now that difference has been inverted, with offshore wind energy in the UK in 2020 more than one half cheaper than the proposed cost of energy produced by the Hinkley Point reactor.

For Jim Green, the economics of nuclear no longer add up. “The industry is on the edge of the cliff,” he said.