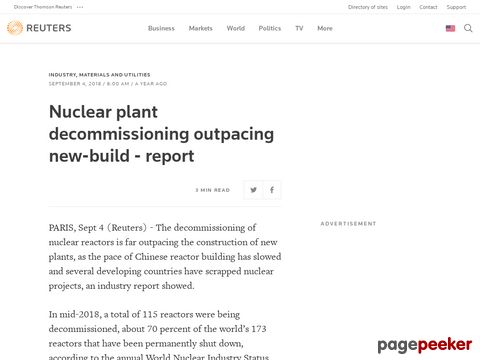 PARIS, Sept 4 (Reuters) - The decommissioning of nuclear reactors is far outpacing the construction of new plants, as the pace of Chinese reactor building has slowed and several developing countries have scrapped nuclear projects, an industry report showed.

In mid-2018, a total of 115 reactors were being decommissioned, about 70 percent of the world’s 173 reactors that have been permanently shut down, according to the annual World Nuclear Industry Status Report (WNISR).

Only 19 reactor units have been fully decommissioned - of which 13 are in the United States, five in Germany, and one in Japan - and just 10 have been returned to greenfield sites.

Many utilities prefer to let reactor cores cool off for decades on-site. “Unscrewing a nuclear installation by workers who know how it was put together makes more sense than cutting it apart decades later by people who know nothing about it,” said Mycle Schneider, lead author of the report.

Decommissioning has become a major activity for many reactor builders and operators here, turning the costly process into a business opportunity.

By comparison, 15 countries are currently building nuclear power plants, two more than in mid-2017, as newcomer countries Bangladesh and Turkey started building their first units. Belarus and United Arab Emirates (UAE) have nuclear new-build projects that are well under way.

Nuclear new-build plans have been cancelled, including in Jordan, Malaysia and the United States, or postponed such as in Argentina, Indonesia and Kazakhstan, the WNISR report said.

At the end of June, 50 reactors were being built worldwide — of which 16 are in China - with total capacity of 48.5 GW. Following the 2011 Fukushima disaster, the number of reactors under construction topped at 68 in 2013 but has trended downward since then.

A total of 413 reactors were in operation in 31 countries in mid-2018, ten more than a year ago and compared with a peak of 438 in 2002. The increase was due to the restart of several reactors that had suffered long-term outages.

The amount of electricity generated with nuclear energy worldwide rose one percent to 2,500 terawatt hours in 2017 and the share of nuclear power in power generation was 10.3 percent, virtually stable over the past five years. (Reporting by Geert De Clercq ; Editing by Mark Potter)