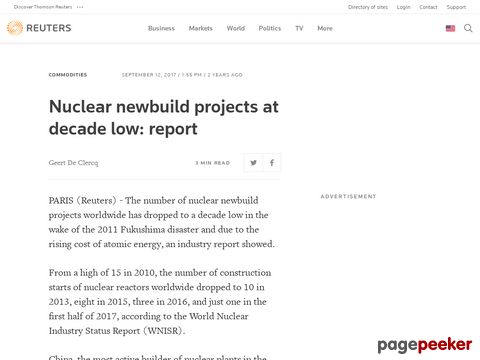 PARIS (Reuters) - The number of nuclear newbuild projects worldwide has dropped to a decade low in the wake of the 2011 Fukushima disaster and due to the rising cost of atomic energy, an industry report showed.

China, the most active builder of nuclear plants in the past decade, saw its newbuild activity slow from 10 in 2010 to six in 2015 and just two last year.

“This may be the end of the Chinese exception,” lead author Mycle Schneider told reporters in Paris.

Schneider said he would not be surprised to see more nuclear projects under construction being dropped, following the abandonment of a high-profile one in the United States.

After the bankruptcy of reactor builder Westinghouse early this year, two South Carolina utilities in July abandoned the V.C. Summer project for two new Westinghouse reactors, which were 40 percent complete after more than $9 billion had been spent on construction.

WNISR data shows that worldwide between 1977 and mid-2017, at least 91 - one in eight - of all nuclear reactor construction sites had been abandoned or suspended in various stages of advancement.

The nuclear industry - which has its annual meeting in London this week - says nuclear will keep playing a major role in low-carbon electricity generation and points at major newbuild programs in China, India, Britain and South Africa.

The share of nuclear energy in global electricity production has fallen from a high of 17.5 percent in 1996 to 10.5 percent last year, when nuclear output increased 1.4 percent, WNISR data showed.

The United Arab Emirates is expected to start up the first of four South Korea-built reactors next year. Vietnam decided in late 2016 to abandon plans to build its first reactors, citing construction costs and safety concerns.

In the first half of 2017, India was the only country to start building a reactor.