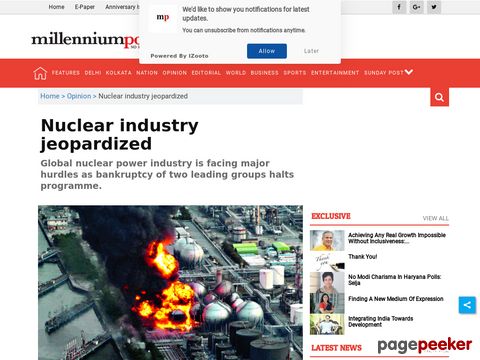 Nuclear power financing is embroiled in a global bankruptcy with the top two, Toshiba-Westinghouse, US subsidiary of Toshiba of Japan and its French equivalent, the state-owned AREVA facing a financial debacle. Toshiba Westinghouse, afflicted with technical problems, time and massive cost overruns at construction projects V C Summer and Vogtle in the USA, filed for bankruptcy protection of its American subsidiary. AREVA went technically bankrupt as a sequel to a cumulative six-year loss of US$ 12.3 billion. The French government came out with a bailout for US$ 5.3 billion, allowing the process of a break-up of the state utility EDF. The rescue scheme was through by the European Commission, although AREVA remains delisted from the Paris stock market since August 2017.

The French major has to struggle facing accusation of ’a vast quality-control scandal that led to the provisional shutdown of a dozen reactors in France. Thousands of fabrication dossiers have to be examined for irregularities or falsifications. The safety implications remain to be assessed’, revealed the Nuclear Industry Status Report 2017 (WNISR2017), just released in Paris. The presenter was Mycle Schneider, international consultant, lead author and publisher, alongside co-authors Juan C Rodriguez, equity analyst at Alpha Value and Andreas Rüdinger, independent consultant and associated researcher at the Institute for Sustainable Development and International Relations (IDDRI).

The spread of the fallout is unprecedentedly wide. In Europe, energy utilities Centrica (UK), EDF, Engie (France), E ON, and RWE (Germany) were downgraded by credit rating agencies last year. As of early July 2017, compared to their peak values during the past decade, the loss of share values by major utilities were RWE of –82 per cent, E ON of Germany –87 per cent, EDF –89 per cent and Engie –75 per cent (both of France). In Asia, the share value of Japanese utility TEPCO, de facto nationalised after the Fukushima disaster, fell by 89 per cent in July this year from the peak value in 2007. The Chinese utility CGN, listed on the Hong Kong stock exchange since December 2014, has been reeling in crisis as during last year and a half, it failed to recover from the 60 per cent loss of share value compared to the peak in June 2015.The Korean utility KEPCO, the only major nuclear utility to reach its peak share value in 2016, too incurred a loss of 37 per cent in value over the past year following tariff cuts, increased operating expenses and the temporary shutdown of four reactors.

“The nuclear share of the world’s power generation remained stable over the past five years, with 10.5 per cent in 2016 after declining steadily from a historic peak of 17.6 per cent. In 1996, nuclear power’s share of global commercial primary energy consumption also remained stable at 4.5 per cent — prior to 2014 the lowest level since 1984,” states WNISR2017. In contrast, renewables are firmly on the upgrade as “wind power output grew by 16 per cent, solar by 30 per cent.” Against nuclear by 1.4 per cent in 2016. “Wind power increased generation by 132 terawatt hours (TWh), solar by 77 TWh, respectively 3.8 times and 2.2 times more than nuclear’s 35 TWh.”

The pathetic status of nuclear power utilities is reflected in the startup shutdown mismatch disclosed by the 267-page report , “In 2016, ten reactors started up, five in China, one each was commissioned in India (Kudankulam-2), Pakistan (Chasnupp-3), Russia (Novovoronezh-2-1), South Korea (Shin-Kori-3) and the US (Watts Bar-2, after 43 years of construction). Two reactors were closed in 2016, Novovoronezh-3 in Russia and Fort Calhoun-1 in the US. In the first half of 2017, two reactors started up in the world, one each in China (Yangjiang) and Pakistan (Chasnupp-4, built by a Chinese company), while two were shut down, the oldest units respectively in South Korea (Kori-1, after 40 years of operation) and in Sweden (Oskarshamn-1, after close to 46 years of operation).”

Defending renewable alternatives out of the contemporary experience, WNISR2017, notes, “New renewables beat existing nuclear. Renewable energy auctions achieved record low prices at and below US$ 30/megawatt hours in Chile, Mexico, Morocco, United Arab Emirates, and the United States. Average generating costs of amortised nuclear power plants in the US were US$ 35.5 in 2015.” In India too, Professor Sujay Basu, the first director of School of Energy Studies, Jadavpur University, who since the early 1970s has been warning against nuclear electricity, having predicted years ago that even if one leaves aside the health and ecological contra-indications, it won’t be economically viable at all, asserts that solar energy (including wind) is now cheaper.

The document is historic for the severe indictment of Fukushima tragedy. “According to government figures, the number of evacuees from Fukushima Prefecture as of March 2017 was about 79,000 or less than half of almost 165,000 in May 2012. On March 31/ April 1, the government lifted restriction orders for 32,000 people. According to a survey of residents’ intentions conducted by the Reconstruction Agency, at the maximum, only 18 per cent of the households desired to return in each of three of the five municipalities located in the evacuation zones. The government has decided to terminate the monthly compensation of about US$900 per person by March 2018 for all evacuees, except for those from the so-called difficult-to-return areas for which there is no plan to lift the evacuation order.”Compensation for some 12,400 Fukushima-Prefecture households that evacuated voluntarily was terminated in March 2017. The social effects of this termination are severe.“This apart, health effects, albeit confidential, mainly on thyroid cancer, are deepening. The number of cancer cases found in children is about 30 times that of the national average. The official survey consistently stated that”It cannot be concluded whether or not the incidences of thyroid cancer found in the examination are due to exposure from the Fukushima accident.“A disturbing feature of state authorities in most of the countries (including India) is indifference to dismantle nuclear power utilities even after it becomes overdue. Dr M V Ramana, an eminent nuclear physicist and Professor and Simons Chair in Disarmament, Global and Human Security, Liu Institute for Global Issues, University of British Columbia and one of the consultants to WNISR2017, is of the view”One contemporary reason for this disinterest is that the economic landscape for nuclear power is so poor that few want to construct new nuclear reactors. As a result, there is a lot of pressure to keep old nuclear plants running. There has been relatively less interest in worrying about dismantling old plants." Further, the reality is that nine of the 31 nuclear power producing countries generated more electricity from non-hydro renewables rather than from nuclear power.

(The views expressed are strictly personal.)