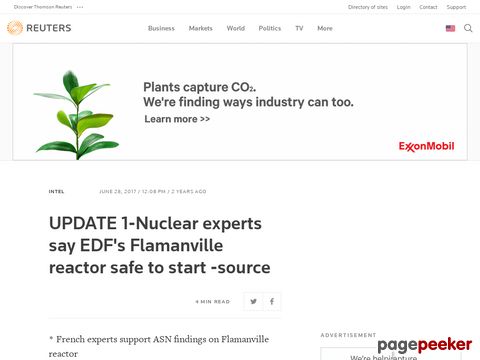 * Japan’s JSW, not Areva’s own foundry, would forge new cover

PARIS, June 28 Utility EDF’s Flamanville 3 nuclear reactor in northwest France has been cleared by a group of experts for start-up despite weak spots in its steel, confirming the findings of the ASN nuclear regulator, a source close to the situation told Reuters.

Completion of the third unit at Flamanville, where two reactors have been operating since 1986-87, had been thrown into doubt after the discovery in 2015 of weak spots in the steel prompted an extensive safety review by the ASN.

The ASN report on the reactor, which has yet to be released but a copy of which has been seen by Reuters, concludes that the reactor is fit for service, though it will need to be monitored throughout its lifetime and the lid of the containment vessel will probably need to be replaced in a few years.

The « Groupe Permanent » experts, appointed to provide an independent second opinion, discussed the report on Monday and Tuesday and drafted its recommendation late on Tuesday evening, the source said.

The group’s non-binding recommendation, which will be used by the ASN to formulate a final ruling on Flamanville this autumn, is expected to be published by the ASN at a news conference at 1400 GMT on Wednesday, along with its report.

The source also said that representatives of EDF had told the group of experts that the utility had started a procedure to order a new reactor cover from manufacturer Areva.

The new cover would be forged by Japan Steel Works, not by Areva’s Creusot Forge foundry, which manufactured the piece with carbon concentrations that were found to have made the steel more brittle. The new cover will still be tooled by Areva, the source added.

The stakes are high for EDF and Areva because it would cost billions of euros and take years to repair the vessel if ASN rules that the steel is too brittle.

The ASN’s green light for Flamanville, slated for start-up in late 2018, is also a European Commission precondition for approving EDF’s planned takeover of Areva’s reactor business.

The source said that the ASN may publish a provisional ruling on Flamanville on its website around July 11 for public consultation.

Following input from the public and industry, it will then publish its final ruling in the autumn. Industry watchers say it its unlikely the final ruling will differ much from the original report and the experts’ recommendation.

« The ASN is no longer able to decide on safety in all independence and cannot resist industry pressure, simply because the survival of the entire French nuclear industry is at stake with the approval of this reactor vessel, » Greenpeace said.

Greenpeace and other anti-nuclear activists argue that the group of experts is too close to the ASN and the nuclear industry to be able to contest the ASN’s conclusion that Flamanville will be safe to operate.

The ASN does not detail the experts’ professional backgrounds, but a spreadsheet obtained by Reuters shows that eight of them work or have worked with the ASN or IRSN, the technical arm of the regulator. Another eight work or have worked for EDF or Areva.

Critics say that only three of the experts are independent of the nuclear industry.

« The ASN is using an expert committee that is at its feet, with a text it has drafted itself, to legitimise a highly controversial decision on the safety of a device whose failure could have implications for millions of people, » said Mycle Schneider, author of the annual World Nuclear Industry Status Report.