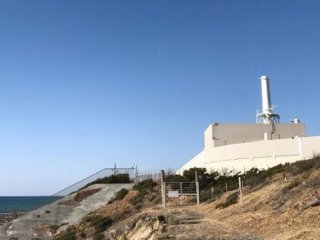 OMAEZAKI, Japan—At a seaside nuclear-power plant here, a concrete wall stretching a mile along the coast and towering 73 feet above sea level offers protection against almost any conceivable tsunami. Two reactors are ready to start splitting atoms again to heat water into steam and generate power, the operator has told regulators.

Yet despite safety measures set to cost nearly $4 billion, the Hamaoka plant hasn’t produced a single kilowatt since May 2011, and it has no target date to restart. The paint on billboards is fading and an old “no trespassing” sign outside the barbed wire lies on the ground—signs of creeping neglect.

Even a local antinuclear leader, Katsushi Hayashi, said he spent more time these days fighting an unrelated rail line in the mountains, confident that regulators and public opinion wouldn’t let the plant open any time soon. “Fukushima gave us all the proof we need. It’s dangerous,” Mr. Hayashi said.

The triple meltdowns at Japanese nuclear reactors in Fukushima after the March 11, 2011, earthquake and tsunami marked a turning point in an industry that once dreamed of providing the world with nearly unlimited power.

A decade after Fukushima, just nine reactors in Japan are authorized to operate, down from 54 a decade ago, and five of those are currently offline owing to legal and other issues. All of Fukushima prefecture’s reactors are closed permanently or set to do so. Chubu Electric Power Co., owner of the Hamaoka plant, declined to make an executive available for comment. It has formally applied to reopen two reactors at the plant and told regulators that new measures such as the wall, mainly completed in 2015, make them safe to operate.

Days after the 2011 meltdowns, German Chancellor Angela Merkel announced an end to nuclear power in her country, and the final reactor is set to be retired next year. The U.S. tightened regulations in response to Fukushima, and no reactors that began planning after 2011 are under construction. From Anglesey, Wales, to Uljin County, South Korea, projects long in planning have ground to a halt over safety concerns and spiraling costs.

It’s too early to say, however, that Fukushima’s meltdowns killed nuclear power everywhere. Rather, they divided the world between wealthy developed nations that are mostly shunning nuclear and a coterie of developing nations, led by China, where the industry retains hope for growth.

The number of operating nuclear reactors globally stood at 408 as of July 1, 2020, down from 437 just after the Fukushima meltdowns, as new openings fall short of closures in Japan, Germany and elsewhere, according to the World Nuclear Industry Status Report, and operating capacity has changed little over the decades.

Nuclear power produces about one-tenth of the world’s electricity, down from a peak of 17.5% a quarter-century ago.

The global move toward reducing carbon emissions, symbolized by the Biden administration’s decision to rejoin the Paris climate accord, is a tailwind for nuclear power in some places. The World Nuclear Association, an industry group that includes power companies and nuclear-plant builders, counts about 50 reactors under construction world-wide, including 16 in China. Some nations such as Canada are looking at a new generation of smaller reactors.

“I see a completely different picture the past two or three years. We’ve started seeing a lot of countries around the world really engaging again on new nuclear,” said George Borovas, head of the nuclear practice at law firm Hunton Andrews Kurth, citing interest in Eastern Europe and the Middle East among other places.

Mycle Schneider, a nuclear-energy consultant who is often critical of the industry, said there was no point spending 10 or 15 years trying to build new nuclear plants given the fast-dropping costs of renewable energy and the batteries to store it.

“A large part of the nuclear fleet around the world is not competitive with new renewables today,” Mr. Schneider said. “The industry was in trouble before 3/11”—the Fukushima meltdowns—“and 3/11 has dramatically worsened the situation.”

He pointed to an auction by Portugal’s government last August in which one successful bidder agreed to supply solar power for slightly more than 1 cent per kilowatt-hour, the amount of electricity needed to keep 10 100-watt lightbulbs running for an hour. That compares to between 2.8 cents and 10 cents per kilowatt-hour for nuclear power, according to an International Energy Agency calculator.

Renewables aren’t necessarily cheaper when the intermittency of the power they produce is factored in, say nuclear defenders. They also say losing expertise in nuclear science could have national-security implications for Western nations and Japan, and they see value—both for consumers and local economies—in a source of energy that can last up to 80 years.

“The best green jobs are in nuclear energy because they’re head-of-household jobs and they’ll take you through your entire career,” said Kristin Zaitz, an engineer who co-founded Mothers for Nuclear, a group formed by two women to advocate for the industry.

Nuclear often loses out to renewables on cost because of heavy regulation, which raises construction and operating expenses. “It’s already the safest way of making reliable electricity. We can do a little more in terms of trying to keep them operating instead of burdening them with more regulations,” said Ms. Zaitz.

That is where Fukushima looms large, because memories of the radiation leaks there make the public, especially in Japan, resistant to arguments for a lighter regulatory touch. One survey in 2019 by a pro-nuclear industry group found 60% of Japanese respondents wanted to reduce or eliminate nuclear power.

Even Chubu Electric, the owner of the unused nuclear plant, isn’t eager to openly advocate restarting its plant. In February, it put out a brochure and internet videos touting the wall’s impregnability and the watertight reactor buildings. The brochure didn’t mention the company’s application to restart reactors. “There are various ways of generating electric power, and none of them is perfect,” the brochure said.