More than half of the world’s new nuclear capacity is under construction in Asia, while cheap natural gas and cost overruns have all but halted new construction in the US. 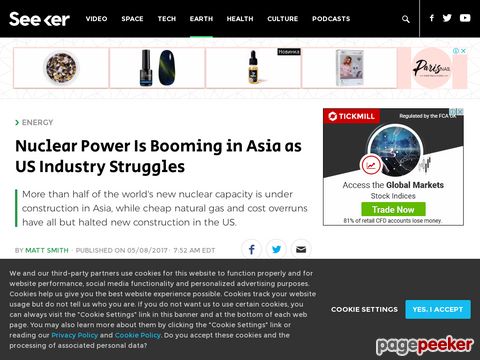 Source : Nuclear Power Is Booming in Asia as US Industry Struggles https://www.seeker.com/earth/energy/nuclear-power-is-booming-in-asia-as-us-industry-struggles

The lights may be dimming on nuclear energy in the United States, but the sun is still rising in the East. The business is booming in Asia, where more than half of the world’s new nuclear capacity is under construction. The bulk of that is in China, which is building nuclear power plants at a rapid clip, using a combination of US, European, and domestically designed reactors. It has 20 reactors currently under construction, compared to a half-dozen in Western Europe and four in the United States. China is still rapidly developing and trying to reduce its reliance on coal-fired power plants, said Ed Kee, CEO of the Nuclear Economics Consulting Group. That’s helping China reduce the country’s notorious air pollution and cut its carbon emissions — but it’s also helping the country build a valuable export industry, he said. Meanwhile, South Korea has 25 reactors that provide about a third of its power, with five more under construction. Its Korea Electric Power Company is also building a four-unit nuclear plant in the United Arab Emirates, having won the bid over competitors from the United States, Russia, and France.

“They both have some common characteristics,” Kee said. “The government owns the entire value chain, from the utilities all the way down to the supply chain. In both countries, more China than Korea, the nuclear power build is about a national plan and national objectives.” Of the 10 new reactors that came online in 2015, five were in China; Pakistan, India, Russia, the United States and South Korea each added one. Of the three completed in 2016, two were in China and one — built by a Chinese company — was in Pakistan. “It’s China and the rest of the world,” said Mycle Schneider, a Paris-based energy consultant who publishes the annual World Nuclear Industry Status Report.

In the United States, nuclear operators in competitive electric markets are losing ground to cheap natural gas. To keep their reactors online, many are seeking state subsidies as a largely carbon-free electric source. The only US reactor to join the grid in 2016, at Tennessee’s Watts Bar nuclear plant, came into service 43 years after the project was launched.

The first new American reactors being built in decades — two each in plants in Georgia and South Carolina — are years behind schedule and billions over budget. Those overruns drove their builder, Westinghouse, into bankruptcy in March, but the utilities behind those projects expressed confidence that they’ll be finished no matter what happens in bankruptcy court. Westinghouse is also building four reactors of the same design in China.

The forecasts of rising demand and cheaper power plants made during the much-touted “nuclear renaissance” of the past decade never materialized, Schneider said. Even if the reactors now under construction in the United States are completed, “they would never, ever bring back the money they cost.”

China is now deploying its third generation of reactors, which are believed to be comparable to other designs in terms of safety, but Schneider expressed concern about its rush to train workers to staff those new plants. Beijing froze its buildup for four years after the massive Japanese earthquake in 2011, which led to catastrophic meltdowns in three reactors at the Fukushima Daiichi nuclear power plant — the industry’s worst disaster since Chernobyl.

“There were very powerful people inside the establishment saying, ‘Whoa, whoa, whoa, what are we doing. here?’ ” Schneider said. The country is still debating whether to build any plants in the interior of the country, near their agricultural heartland, he said.

Kee said China’s new designs are safer and easier to operate than American reactors, which were conceived in the 1970s and 1980s. Their current designs “are comparable to the best the Russians, the French or the US could offer,” and Chinese anti-corruption laws are notoriously strict: A nuclear executive convicted of taking a bribe during a 2004 bid competition was sentenced to death, though the sentence was later commuted to life in prison.

“They’re pretty serious about the nuclear industry being straight and getting things right,” Kee said.

But the Asian wave may already be breaking, Schneider said. Vietnam has halted plans for nuclear power plants, and South Korea’s elections may bring in a government pledge to rein in that country’s ambitious nuclear program.

Bangladesh appears to be going forward with a Russian-built power plant, but construction has yet to start. And for all its investment in nuclear power, China has been spending five to 10 times more on renewable energy sources like wind and solar, Schneider said.

“This is an old industry,” he said. “The average age of the world nuclear fleet is over 30 years. Thirty years ago, we were in another technological age. Think of the car you owned 30 years ago … it’s a totally different time context.”