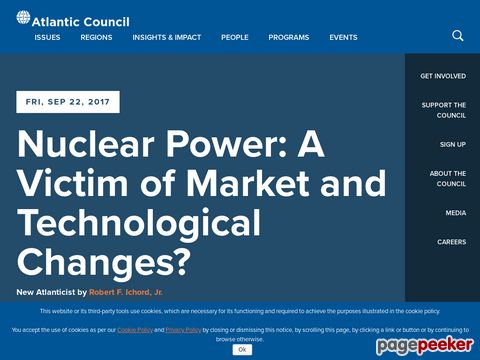 Super hurricanes Harvey, Irma, and Maria have put a spotlight on US President Donald J. Trump’s policy position on climate change, which seems to deny the scientific reality. Although its “energy dominance” policy seeks to expand coal, oil, and gas, the Trump administration in June announced a “complete review of US nuclear energy policy” with the goal of revitalizing this energy resource the future of which is in serious doubt.

Nuclear power provided almost 20 percent of US electricity and 10 percent of global electricity in 2016. As a low-carbon source of baseload power, but one that requires substantial capital investment and comes with security risks, nuclear power is important from a security, economic, and environmental perspective. This is particularly relevant in the United States, the global leader in nuclear power with ninety-nine licensed reactors, where the industry is facing strong headwinds.

In the United States, the industry faces multiple challenges, including from lower-cost gas and wind energy, aging reactors, expensive operations and maintenance, enormous projected waste management and decommissioning requirements, and huge cost overruns in the construction of the four new plants that were to lead the rebirth of the US nuclear industry. These issues have had a significant impact on the domestic industry. Economic and specific regional market realities have caused a half dozen plants to close since 2013, with more closures to come.

The prospects for existing plants, much less new plant construction, are dim. In a major setback, construction on the two V.C. Summer reactors in South Carolina was halted on July 31, after completion costs were estimated at an additional $5.3 billion. All eyes are now on Georgia Power and Light, which recently proposed continuing construction on its Vogtle AP1000 reactors despite huge costs overruns. This would be subject to approval from the Georgia Public Utility Commission. To survive, companies are pressuring state and federal authorities for subsidies and tax breaks, with some success in New York and Illinois. They are arguing for emissions credits and reliability and capacity payments.

The recently released World Nuclear Industry Status Report 2017 underscores that the problems affecting the US nuclear industry are not unique.

Globally, there are 403 reactors operating in thirty-one countries. About a quarter of these reactors are in the United States. Global installed capacity is 351 GW, producing a combined 2,476 TWh of electricity in 2016, slightly more than in 2015. The United States, France, China, Russia, and South Korea together account for 70 percent of the world’s nuclear power generation.

Following the Fukushima nuclear disaster in Japan on March 11, 2011, and as the cost of alternative energy sources has declined, many countries, including Germany, Taiwan, and South Korea under the new government, have adopted nuclear phase-out or reduction policies. Under Emmanuel Macron, France, a global leader in nuclear power, capped nuclear generation at 50 percent (it currently provides 80 percent), which could lead to the closure of a third of its nuclear units.

The age of the nuclear fleet has played a key role in phase-out decisions—231 of the reactors around the world are over thirty-one years old, and sixty-four are older than forty-one. Even where the operating licenses have been extended—eighty-four US reactors have received extensions from the original forty years up to sixty years—the perceived safety risks and cost of maintaining and retrofitting these reactors has led to premature closure. The economic costs of closures and the impacts on utility owners, notably in Germany and Japan (where only five of thirty-three reactors have reopened since the Fukushima disaster) and also Westinghouse in the United States, have been in the tens of billions of dollars.

Despite these trends, many countries are still looking to nuclear power: fifty-three reactors are under construction in thirteen countries, with China dominating the field with twenty. However, two-thirds are delayed, including several in China, resulting in long periods of construction and additional costs even as the attractiveness of gas and renewable alternatives increases.

With these obstacles in mind, when it comes to the future of nuclear energy, China clearly stands out as an exception. Chinese policy has sought to expand nuclear energy domestically and internationally as China hopes to become the global nuclear leader, spearheading projects from Argentina to Romania, and from the United Kingdom to Pakistan, and pursuing opportunities in South Africa, Saudi Arabia, Turkey, Kazakhstan, and Thailand.

With government policies and the financial problems of Toshiba’s Westinghouse, France’s AREVA, and RWE/EON in Germany, Chinese companies, with support from state policy banks like the Chinese Export-Import Bank, are making inroads. Despite its aggressive pursuit of overseas markets, China is far from the only player in the field. South Korea won a big contract in the United Arab Emirates, and Russia is pursuing projects in several countries, even though its ability to finance deals seems limited except in the cases of Turkey, Hungary, and Belarus.

This international expansion at the same time the US industry is struggling raises questions about nuclear safety standards, as well as about waste and proliferation of nuclear materials in unstable regions. The decline in the US nuclear industry will certainly have an international impact on both the regulatory development and operational practice dimensions of future global nuclear development.

Given the capital expense and delays in developing new large-scale nuclear units, many hopes are placed on technology innovation, specifically the potential for small modular reactors (SMRs), which could be economically mass produced and implemented with better safety features, to potentially revolutionize the industry. The United States, Russia, China, and South Korea have all been pursuing designs, but only China is expected to have an operational plant any time soon, as ventures face questionable market interest and estimated costs are too high to be viable. Nevertheless, with US Department of Energy support, NuScale Power is proceeding with a design accepted for certification review by the US Nuclear Regulatory Commission.

As the nuclear industry struggles to find its future footing, alternatives are becoming increasingly attractive. Forecasts suggest that nuclear power will continue to lose ground to renewables, including in China, India, and other growing markets. Even in China, the world’s biggest growth country for nuclear, 7 GW of new nuclear capacity was added in 2016 compared to 52 GW of wind and solar power capacity.

With the declining costs of alternatives and more effective grid management, the decision to build nuclear units is increasingly a political one and difficult to justify in most cases from an economic or even environmental standpoint, even with a carbon tax or emissions trading framework. Indeed, the World Nuclear Industry Status Report 2017 summed this dynamic up, with former Tennessee Valley Authority Chairman S. David Freeman’s assessment that “The world no longer needs to build nuclear power plants to avoid climate change and certainly not to save money.”

Robert F. Ichord is a nonresident senior fellow at the Atlantic Councils Global Energy Center. He is a former deputy assistant secretary for energy transformation in the State Department’s Bureau of Energy Resources.