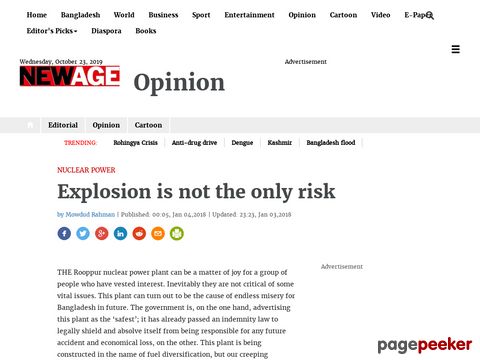 Source : Explosion is not the only risk http://www.newagebd.net/article/31737/explosion-is-not-the-only-risk

THE Rooppur nuclear power plant can be a matter of joy for a group of people who have vested interest. Inevitably they are not critical of some vital issues. This plant can turn out to be the cause of endless misery for Bangladesh in future. The government is, on the one hand, advertising this plant as the ‘safest’; it has already passed an indemnity law to legally shield and absolve itself from being responsible for any future accident and economical loss, on the other. This plant is being constructed in the name of fuel diversification, but our creeping educational system and inadequate research and development facility are compelling us to become increasingly dependent foreign resources and bodies. Successive governments have pursued the Rooppur nuclear power plant as an option for long-term energy security, but without long term uranium supply contract, it is nothing but a persisting burden.

Bangladesh’s power sector is struggling to provide the country with continuous electricity supply. At the moment, about 35 per cent people are out of grid connectivity. It is undoubtedly true that this sector needs to improve drastically but that development should not come at the expense of our energy independence, safety and security. We need to question the fact that why after having so much technological innovation in hand, Japan failed to prevent Fukushima nuclear power plant accident in 2011, we need to find out the reason behind Germany’s decision of nuclear phase out by 2022, we need to realise the logic behind Australia’s decision of not having a single nuclear power plant despite having the largest uranium reserve in the world.

The veneration of 3rd generation plus technology for Rooppur nuclear power plant is nothing but an advertising tool of nuclear industry. Improvement of technology is a continuous process and it keeps on adding new feature every day. So, third-generation technology might be the latest one in their basket but surely not the last one. Russian company Rosatom have won the bid to construct the plant in Bangladesh and now trying to convince us with post Fukushima standard technology but who knows there will not be any post Rooppur standard technology after any accident happen in Bangladesh! Therefore, it is for sure that third-generation plus technology cannot be the right answer of our concern. Then why should we keep our faith on such technological development which used to be happening at the expense of immense loss of lives every time in case of nuclear power! While government is selling the glory of technological development, we should keep them reminding the loss of hundred thousand lives in Chernobyl with second generation technology. Not to mention, $188 billion expense estimation till date for cleaning up the mess of Fukushima nuclear power plant accident (Reuters, December 9, 2016).

Nuclear industry is surviving on misinformation and state sponsorship. We are observing the same in case of Rooppur 2,400 MW nuclear power plant. In Bangladesh, 800m area surrounding the nuclear reactor is being considered an ‘exclusion zone’ and it is being advertised that day to day activity is safe outside of this 800m parameter. But if we take a look into the IAEA safety standard guideline then we will find two zones surrounding any nuclear reactor. First one is the precautionary action zone which has 5km radius area of any nuclear reactor and it is recommended to have evacuation facility and preparation for any emergency situation to evacuate the area within 15 minutes notice. Second zone is the urgent protective action planning zone which has 30km radius area and it is recommended to have the facility to evacuate the area within 1 hour during any emergency situation. People of Pabna, Bheramara, Lalpur, Kushtia, Iswardi all are living within 30km area of proposed Rooppur nuclear power reactor. Are they already informed by the government regarding the emergency situation? Is there any plan to comply with international safety and security standard and build infrastructure to evacuate millions of people within one hour? Would it be possible to build such capacity in Bangladesh within next few years?

To justify Rooppur project, propaganda is going on regarding world nuclear energy status. Nuclear power supplied 17.6 per cent of total electrical energy in 1996 which was the highest production ever. Then it has decreased gradually and in 2016, it has come down to 10.5 per cent (The World Nuclear Industry Status Report 2017). Unfortunately, this gradual declination could not help to demotivate the nuclear devotee in Bangladesh; rather they are claiming the opposite. For instance, if we consider the nuclear power sector development in India, then we will find that it took fifty years to install 7 GW (1 GW equals 1,000 MW) nuclear plant, whereas for solar it took only one decade to come up with 12 GW capacity plant and their target is to install 160 GW capacity of solar and wind power plant by 2022. Now per unit electricity from solar and wind power costs lower than Tk 3.5 in India. However, nuclear industry has always been at the top in terms of getting support from the government. In 2002–03, the Department of Atomic Energy in India received Rs 33 billion whereas the ministry of nonconventional energy sources received only Rs 4.7 billion for renewable energy development (Ramana M V, 2007).

In India, there is a special law to accuse involved companies in case of any malfunctioning or accident in nuclear plant. Even after that Russian company Rosatom installed substandard equipments, ignored recommendation of Indian expert community, kept secret the findings in annual report and delayed construction work of Kudankulam nuclear power station by six years. Now, we can imagine how the same company Rosatom would treat Bangladesh, particularly in a situation where government has already passed an indemnity law to protect everyone related to nuclear power project (Nuclear Power Plant Act 2015).

Leak of radiation is very common in nuclear power plant. However, the concerned authority always denies the truth and that is how this industry is still surviving. In October 2017, the French public authority of nuclear safety and security identified a cloud of radioactive isotope ruthenium-106 in European territory which originated from Russian nuclear facility. Obviously, Russia’s nuclear agency has refused to accept any such incident (The Guardian, November 21, 2017). In India, on the other hand, 1,733 scientists and employees who used to work in nuclear facility have died in 1995 to 2010. Most of the victims were below fifty years of age (Rediff, October 4, 2010). However, there was neither any fact finding committee nor any public disclosure about such large number of untimely death in the so called ‘safe’ nuclear facility. The government of India formed three committees so far for auditing the safety and security standard of nuclear power plant, but the recommendations are yet to be implemented because it is related to the fresh investment of millions of dollars.

With the technological development in other sources power generation, eg renewable energy is following the downward spiral trend in terms of cost but nuclear power is following the opposite. For nuclear power, every new feature is coming with an extra cost and with the advent of new technology it becomes necessary to adopt that to make ‘secured’ nuclear power more ‘safe and secured’. That’s why predicted cost always falls behind the actual construction cost. The construction of 75 nuclear reactors was started in USA in between 1966 and 1976. In each of those cases, actual construction cost was found 300 per cent higher on an average than the estimated cost at the beginning and that trend still continues. In 2007, France started the construction of 1,570 MW capacity Flamanville nuclear power plant with 3.3 billion euros cost estimation which was targeted to be completed by 2012 but the construction is still going on and the revised budget for that plant is 10.5 billion euros till date. The additional budget of Tk 18,000 crore for Rooppur nuclear plant even before the construction started makes it evident that we are also preparing to embrace that same ill fate of budget draining into this project if it can’t be stopped (Jugantor, August 18, 2017). Contrary to the cost of nuclear power generation, per unit solar and wind power cost reduced by 82 per cent and 61 per cent respectively in between 2009 and 2015 (LAZARD LCOE Analysis, 2015).

Explosion is not the only risk for nuclear power plant. This industry comes along with a set of exploitative tools that affects ecology, environment, economics and health. Rooppur nuclear power plant is not the means of energy diversification as it is being advertised rather it is going to be the trap of energy dependency. The government is trying to rationalise its high initial cost for future benefit, but if we take into account the fact of its costly waste management and decommissioning activity then we cannot agree more to identify this project as future burden. Disregarding proper procedure and public consultation, Bangladesh government is not only constructing the 2.4 GW Rooppur nuclear power plant, but also have taken plan to install 4.8 GW more capacity of such plant across the country by 2041 which is nothing but a short-sighted tyrannical vision. For the sake of our energy security and attaining low cost self-sufficiency, government needs to revisit its current Power Sector Master Plan and put the main focus on energy efficiency, gas sector development and renewable energy expansion, instead of coal and nuclear power.

Mowdud Rahman is an engineer and energy researcher. He is also a member of the editorial board of Sarbajonkotha.