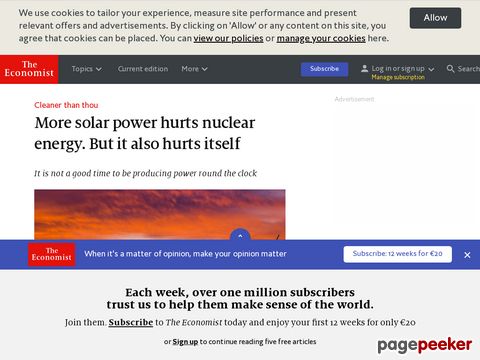 SOME call it a zero-carbon schism, others a heresy. The researchers, policymakers and environmentalists united over the need to stop global warming are divided on how to go about it. Many believe that renewable energy, especially wind and solar, has by far the biggest role to play. A dogged few, however, cling to nuclear energy, which is also carbon-free but has an image problem. The two camps barely speak to each other.

That is why three little words, “zero-carbon resources”, in a bill that landed on the desk of California’s governor, Jerry Brown, on August 29th are so important. Not only would the legislation commit the state to generating 60% of its electricity from renewables by 2030, up from a previous mandate of 50%. It also calls for generating 100% by 2045 from renewable and “zero-carbon resources”, which could include nuclear power. Of course, by then other emission-free energy technologies, such as batteries, hydrogen, and the capture and sequestration of carbon dioxide from fossil-fuel plants, could be better and cheaper than splitting nuclei. But atomic energy would stand a chance if it is still around. And in green matters, where California goes others often follow.

In 2017 almost 30% of the state’s electricity came from renewable sources, with solar and wind accounting for about 10% each. Nuclear was about 9%. A decade ago, solar was just 0.22%, and wind 2.25%, with nuclear at 15%. Nuclear’s relative decline reflects, in part, a global trend highlighted in the World Nuclear Industry Status Report (WNISR), issued on September 4th. During the past decade investment in renewables has surged, whereas in nuclear it has stagnated (see chart, top panel). Falling prices of solar panels and wind turbines, the ever-growing expense and difficulty of building nuclear facilities, and cheap natural gas all play a part.

A working paper published last month by James Bushnell and Kevin Novan of the University of California, Davis, underscores the challenge that renewables pose for nuclear and other sources of baseload power, such as coal. It shows that average output at noon from big solar farms in California increased tenfold between 2012 and 2016. That has had a big impact on wholesale power prices. The average real-time price around midday has dropped sharply, whereas after sundown average prices have increased. The more solar capacity is installed, the authors find, the worse for baseload generators—that is, those that produce electricity around the clock. The new energy mix rewards gas turbines that can be turned on for a few hours to satisfy peak demand in the evening.

But because additional solar capacity will produce power at times when there is already a glut, returns to further investment in solar capacity will decline. This points to a big flaw in state mandates, such as California’s, which assume that investment will pour into renewables even if market prices are low. The authors favour a price on carbon instead (California already has a “cap and trade” scheme), which would help spur investment in clean-energy provision at times when the sun is not shining.

About 150 gigawatts of wind and solar were installed globally in 2017 versus 3GW of nuclear. Yet even though so much favours renewables, atomic energy is not dead. Nuclear power still provides more than twice as much electricity globally as wind, and 5.5 times as much as solar, partly because it runs all the time rather than intermittently. In June President Donald Trump instructed his energy secretary, Rick Perry, to take emergency steps to keep nuclear and coal plants running, citing national-security considerations. In April New Jersey launched a scheme to reward nuclear-power plants for producing emissions-free power, as part of the state’s goal for 100% clean energy by 2050.

China will be central to nuclear power’s future. It accounted for three of the four new nuclear plants to connect to the grid last year globally, has the most reactors under construction, and in June introduced two new classes of design. But it also leads the world in renewables. Russia’s Rosatom, a state-owned nuclear-power firm, is selling its technology abroad vigorously.

The WNISR, whose authors consider themselves industry critics, draws attention to another potential reason why nuclear power is resilient: its usefulness for nuclear-weapons programmes. The processes which produce fuel for civilian plants can also be used to produce crucial fissile material for weapons, and the training, research and industrial capabilities that come with an indigenous civilian nuclear programme can be very helpful for other purposes, such as nuclear submarines programmes. It says that only in the past few years are insiders starting to acknowledge, in countries like America, that it is hard to sustain a nuclear-weapons capability without a parallel civilian nuclear programme. That may help explain the commitment to keep alive plans to build nuclear plants among big military powers in the West and Asia, even though a mixture of renewables and natural gas could be far cheaper. Such suspicions merely widen the rift between the two carbon-free camps.

Correction (September 7th, 2018): This article originally stated that civilian power plants were the only way to produce fissile material for nuclear weapons programmes. They are not and this has been corrected.