What does the future of nuclear power look like, and what will China’s dominance mean for the rest of the world? Power Technology investigates. 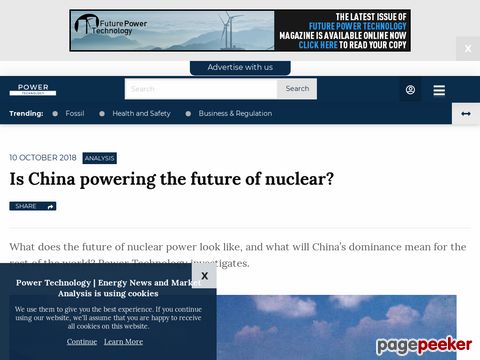 Source : Is China powering the future of nuclear? 10 October 2018 https://www.power-technology.com/features/future-of-nuclear-china

The future of nuclear seems to be seated in China. Over the past two decades, the country has been steadily building its nuclear capacity, increasing the number of operating plants from three to more than 40 in 2018, with an additional 18 under construction.

Now, the country is the biggest platform in the world for nuclear power, making up more than half of new global nuclear investment and slated to overtake the US in nuclear power production sometime before 2030.

So what does the future of nuclear power look like, and what will China’s dominance mean for the rest of the world? Power Technology investigates.

This year’s World Nuclear Industry Status Report found that outside of China, global nuclear power generation declined for the third year in a row, with disasters such as Fukushima causing many nations to scale back on such a volatile power source. In contrast, China has been consistently favouring its development.

According to the World Nuclear Association, mainland China has over 40 nuclear power stations in operation, while the government’s long-term target outlined in its Energy Development Strategy Action Plan 2014-2020 is set at 58GWe nuclear capacity by 2020, with an additional 30GWe hoped to be under construction.

Cost has been identified as a driving factor of this rapid nuclear development, with an MIT study finding construction to be far cheaper in the East than the Western world. “In Korea, in China and the UAE, which is being built by the Koreans – the cost is $3,000-$4,000 per kilowatt,” study co-author David Petti said, adding that by comparison in the West costs are “north of $8,000 per kilowatt”.

In addition there is President Xi Jinping’s ‘war on pollution’, which has seen a series of cuts on carbon-emitting power sources in an attempt to limit smog in the country. With coal-heavy options being pushed to the background, attention is turning to the alternative of nuclear power as a low-carbon energy source with capacity for a large base load of electricity.

“This rationale follows from China’s need for energy security,” says Mark Hibbs, Nuclear Policy Program senior fellow and author of The Future of Nuclear Power in China. “If China’s power demand grows over the next twenty years at a rate just half of the average rate since modernisation began in the 1980s, China’s power demand will double by 2040.”

“Unlike many Western countries,” he adds, “China has continued to anticipate that the share of power generation from renewables in China will be limited in the longer term – through the middle of the century – to less than half of the total.”

The World Nuclear Industry Status report said China is home to six of the nine nuclear reactors that commenced operations during 2017 and in the first half of 2018, with the other three located in Russia and Pakistan.

As Hibbs says, the country’s nuclear agenda is also driven by its “confidence that [it] will be able to secure and wield intellectual property in the nuclear technology field, including for exports and as a strategic lever in its foreign relations.”

Indeed, while China has become almost entirely self-sufficient in terms of reactor design and construction, its policy looks to ‘go global’ with its nuclear technology, seeking to export developments to other nations.

The global future of nuclear

A clear target for China’s nuclear power exports is the UK, which unlike other European countries is seeking to expand its own nuclear portfolio to meet climate targets. The country has up to six new nuclear projects planned over the next two decades.

In July this year, it was reported that state-run corporation China General Nuclear Power Group (CGN) was looking to buy a 49% stake in eight UK nuclear power stations, including Sizewell in Suffolk and Dungeness in Kent.

CGN’s UK branch was also a driving factor behind the Hinkley Point C station currently under construction in Somerset, with the firm taking a 33.5% stake to offer financial assistance.

While some see the rise of nuclear as a positive shift away from carbon-heavy sources, the UK’s seemingly increasing reliance on China for nuclear projects has caused some to raise concerns over infrastructure security.

CEO of non-profit Chinadialogue Isabel Hilton told The Guardian that such collaboration was an unprecedented first in the West: “No other OECD country has done this. This is strategic infrastructure, and China is a partner but not an ally in the security sense.

The geopolitical impact of China’s nuclear dominance has been noted before. A report from the Atlantic Council published in March argues for the necessity of the US engaging more in the global nuclear industry for ‘military and commercial interests’, expressing fear over Russian and Chinese industry dominance muscling the US out of potentially lucrative areas.

Indeed, Russia is one of the few countries vying with China in the proliferation of nuclear plants, building nuclear reactors or pursuing commercial deals in India, Bangladesh, Turkey, Hungary, Belarus, Egypt, Jordan, Iran and Saudi Arabia – all places of geopolitical interest to the US.

“US global nuclear engagement is critical,” the report notes, “not only because it supports military needs and advances commercial interests, but also because it brings with it a culture that promotes safety, security of nuclear materials, and non-proliferation.”

Hibbs says fears over security may well stand in the way of China flourishing in the nuclear industry “since potential foreign clients may not be willing to take political and commercial risks associated with a monopoly provider.” Instead, he says it will likely dominate “if it is a leader in a field that includes established nuclear power industries in North America, Russia, and Western Europe, and the Asia-Pacific.”

Security concerns aside, it is undeniable that China is carving out a space for itself in the nuclear sector, and with global energy demands set to grow in the coming years, it seems unlikely to slow down.