But share of nuclear energy generation stagnates globally, and several countries shut down nuclear reactors in 2017 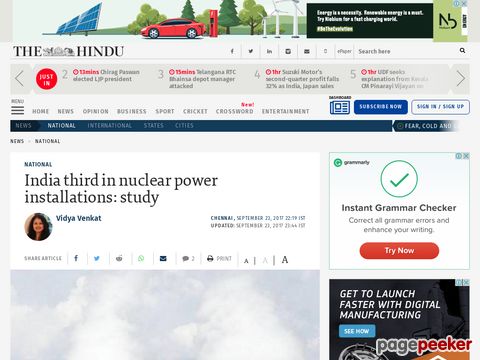 India is third in the world in the number of nuclear reactors being installed, at six, while China is leading at 20, the World Nuclear Industry Status Report 2017, released this month, shows. The number of nuclear reactor units under construction is, however, declining globally for the fourth year in a row, from 68 reactors at the end of 2013 to 53 by mid-2017, the report says.

In the foreword, S. David Freeman, an American energy policy expert who led the Tennessee Valley Authority under U.S. President Jimmy Carter, writes that the debate regarding the value of nuclear energy “is over”. “The most decisive part of this report is the final section — Nuclear Power vs Renewable Energy Development. It reveals that since 1997, worldwide, renewable energy has produced four times as many new kilowatt-hours of electricity than nuclear power,” he writes, concluding, “The world no longer needs to build nuclear power plants to avoid climate change and certainly not to save money.”

Data gathered by the authors shows that global nuclear power generation increased by 1.4% in 2016 due to a 23% increase in China, though the share of nuclear energy in electricity generation stagnated at 10.5%. By comparison, globally, wind power output grew by 16% and solar power by 30%. Wind power increased generation by 132 TWh (terawatt hours) or 3.8 times, and solar power by 77 TWh or 2.2 times more than nuclear power’s 35 TWh respectively. Renewables represented 62% of global power generating capacity additions.

Russia and the U.S. shut down reactors in 2016, while Sweden and South Korea both closed their oldest units in the first half of 2017, the report notes.

The report also documents the financial crisis plaguing the industry. After the discovery of massive losses over its nuclear construction projects, Toshiba filed for bankruptcy of its U.S. subsidiary Westinghouse, the largest nuclear power builder in history. AREVA has accumulated $12.3 billion in losses over the past six years.

The French government has provided a $5.3 billion bailout and continues its break-up strategy, the report notes.

In the chapter on the status of the Fukushima nuclear power project in Japan, six years after the disaster began, the report notes how the total official cost estimate for the catastrophe doubled to $200 billion.

The lead authors of the report are Paris-based energy consultant Mycle Schneider, who advised the European Parliament on energy matters for over 20 years, and Antony Froggart, energy policy consultant and senior researcher at Chatham House, a London-based non-profit organisation working on international affairs.