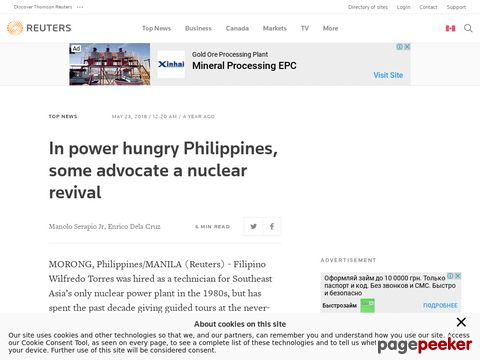 Source : In power hungry Philippines, some advocate a nuclear revival 22 May 2018 https://ca.reuters.com/article/topNews/idCAKCN1IN34C-OCATP

MORONG, Philippines/MANILA (Reuters) - Filipino Wilfredo Torres was hired as a technician for Southeast Asia’s only nuclear power plant in the 1980s, but has spent the past decade giving guided tours at the never-used facility.

The Philippines splashed out $2.3 billion on the 621-megawatt Bataan Nuclear Power Plant, but mothballed it after the collapse of a dictatorship and the devastating Chernobyl disaster.

Now, there’s a chance that Torres, 56, might get to see the plant in action before he retires in four years.

As power demand soars in one of the world’s fastest-growing economies, the Philippines’ energy ministry is looking seriously again at nuclear power and urging President Rodrigo Duterte to fast-track its revival.

“There’s still a few of us who have been here from the start who are hoping to see the plant running before we retire,” said Torres during a tour of the facility, nearly 200km (125 miles) northwest of Manila.

The Department of Energy has asked Duterte for an executive order declaring the Philippines ready for a nuclear power program, said Gerardo Erguiza, energy assistant secretary.

“With the need for cheaper, reliable power, nuclear is ideal,” Erguiza told Reuters. “It’s a template in successful economies.”

Previous attempts to pursue nuclear energy in the Philippines have failed due to safety concerns and because central to the plan is the revival of the Bataan plant, built during dictator Ferdinand Marcos’ rule.

Marcos ordered the Bataan nuclear plant built in 1976 in response to an energy crisis, convinced nuclear energy was the solution to the Middle East oil embargo of the early 1970s.

From 2009, the government opened the plant to tourists for a fee, helping defray the cost of maintaining it, along with an annual state budget that this year was 32 million Philippine pesos ($612,000).

While reopening the Westinghouse-built Bataan plant is an option, so is building a new nuclear facility, said Erguiza, acknowledging the former will “open up so many wounds” after costs came in more than four times the initial budget.

Coal fuels half of the Philippines’ power grid, with natural gas and renewables each accounting for over a fifth and oil the rest. With an economy growing as fast as China’s - at 6.8 percent in the first quarter - Manila expects energy consumption to triple to 67,000 MW by 2040.

“The biggest issue in the Philippines is that we have one of the most expensive power in the world,” he said.

Philippine power rates, which are not state-subsidized, were ranked the 16th most expensive out of 44 countries surveyed in a 2016 study commissioned by power retailer Manila Electric Co. Japan topped the list.

Nuclear reactor builders Korea Hydro & Nuclear Power Co Ltd and Russia’s Rosatom submitted plans last year to rehabilitate the Bataan plant, at costs ranging from $1 billion to more than $3 billion, said engineer Mauro Marcelo who oversaw the maintenance and preservation of the plant before he retired in March.

Rehabilitating the Bataan plant would be the shortest nuclear route for the Philippines, taking about five years all up, versus about a decade for a new plant, said Marcelo.

“In my view, the nuclear policy may be issued during Duterte’s term,” said Marcelo. “But to start the Bataan plant, I think it’s still a long way to go.”

Duterte has said safety will be his top consideration in deciding whether the country will pursue nuclear energy.

Geologist Kelvin Rodolfo has repeatedly warned against the activation of the Bataan plant, saying it sits on an active earthquake fault that runs through a volcano, currently dormant.

“A nuclear accident there would affect a much larger area than the Philippines alone, and so the Philippines cannot make the decision to activate (it) all by itself,” said Rodolfo.

He would like to see the International Atomic Energy Agency (IAEA) make that judgment.

“I have every confidence that they would not approve it,” Rodolfo said.

In the wake of Japan’s Fukushima disaster, the number of construction starts of nuclear reactors dropped from a high of 15 in 2010 to four last year - all in Asia, according to the World Nuclear Industry Status Report.

“Nuclear is very controversial and if we ever wanted to install it in the Philippines, it would not succeed without very strong intervention by the government,” said Antonio Moraza, president of Aboitiz Power, one of the country’s biggest power producers.

• Japan Times (Japan): “In power-hungry Philippines, some advocate a nuclear revival”, 23 May 2018

• Gulf Times (Qatar): "In power-hungry Philippines, some advocate a nuclear revival, 24 May 2018