An International Energy Agency report estimates the share of nuclear power in advanced economies could fall by two-thirds by 2040, as aging plants retire. The report claims without support for nuclear, the transition to a low carbon energy system would be far more complex and threaten global emissions targets. 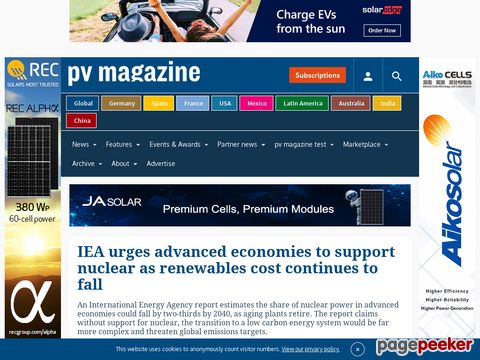 A report published this week by the International Energy Agency, Nuclear Power in a Clean Energy System, found the expansion of clean electricity needs to accelerate dramatically to meet internationally agreed sustainability targets. The study said retiring nuclear capacity risks an increase in carbon emissions and, while the transition to a clean energy system would remain possible, it would be more complex and costly without nuclear.

However, the findings of the divisive study have already been criticized by renewables industry figures.

“Alongside renewables, energy efficiency and other innovative technologies, nuclear can make a significant contribution to achieving sustainable energy goals and enhancing energy security,” said IEA executive director Fatih Birol. “But unless the barriers it faces are overcome its role will soon be on a steep decline worldwide, particularly in the United States, Europe and Japan.”

The report recommends countries “that intend to retain the option of nuclear power” put policies in place to support the technology, including authorizing lifetime extensions for existing nuclear capacity even though market conditions are unfavorable for such a move. Nuclear nations should also structure their energy markets to value dispatchability and other grid services which nuclear power plants provide, added the report’s authors.

The IEA study claims if there is no further investment in nuclear power in advanced economies – and a forecast two-thirds decline in nuclear capacity by 2040 occurred as a result – around four billion tons of avoidable CO2 emissions would be produced. That calculation, however, appears based on an assumption gas or coal, rather than renewables, would replace retired nuclear capacity.

“It is a fallacy to claim nuclear will be replaced by natural gas since solar or wind, plus batteries, is less expensive,” said Mark Jacobson, a professor at Stanford University who has worked for more than a decade on modelling a 100% renewable energy world. “California, Florida, Colorado and South Australia, for example, have all selected renewables-plus-storage over gas.”

Jacobson said the money the IEA is calling on governments to pump into nuclear would be better spent funding further expansion of renewables. “The IEA is irresponsible for promoting the subsidy of expensive, failing nuclear plants instead of using those subsidies to fund clean renewable energy, particularly wind and solar,” the Stanford professor told pv magazine. “These will eliminate more carbon and air pollution than the nuclear they will replace, and at a lower cost.”

The controversial IEA study arrived in the same week as the Renewable Power Generation Costs in 2018 report published by the International Renewable Energy Agency (IRENA), which noted the cost reductions achieved by renewables continue to defy expectations. The review found three-quarters of new onshore wind, and four-fifths of new PV projects due to be commissioned next year, will produce power at lower prices than the cheapest new coal options without financial assistance.

“Renewable power is the backbone of any development that aims to be sustainable”, stated IRENA director-general Francesco La Camera. “Today’s report sends a clear signal to the international community : Renewable energy provides countries with a low-cost climate solution that allows for scaling up action.”

Breyer noted other technologies vital to the energy transition, such as power-to-X and the electrification of the heating and transport sectors require very low energy costs that cannot be met by nuclear, while the issue of renewable energy intermittency and the lack of flexibility cited by the IEA can all be managed by energy storage and other innovations. Breyer also highlighted the IEA’s historic underestimation of renewable energy as a further problem, adding : “The report claims that less nuclear would lead to higher cost in the energy system. Given the much too high cost assumptions for renewables and the too low cost assumptions for nuclear energy in the World Energy Outlook, this may be the case for the IEA scenarios, but it violates results with real cost numbers : the real cost for nuclear energy and the real cost for renewable energy.”

Mycle Schneider, lead author of the World Nuclear Industry Reports said, while IEA statements that “additions of new [nuclear] capacity have dwindled to a trickle” and “most nuclear power plants in advanced economies are at risk of closing prematurely” are not far from the findings of his annual assessments, it would take more than the policy changes recommended by the IEA to revive nuclear. “The IEA’s assumption that it is only a matter of political will to reverse the trend and obtain ‘an 80% increase in global nuclear power production by 2040’ is lacking basic evidence for industrial feasibility, and is in fundamental contradiction with the historic performance of the industry over the past three decades,” Schneider said.