As nations like France extend the life of ageing nuclear energy infrastructure, bordering countries that could suffer most from a meltdown have little say. 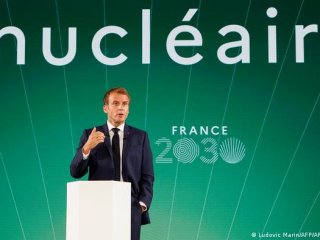 The 1986 Chernobyl nuclear disaster that spread radioactive waste across Europe — some of which remains present 35 years later — sparked a reevaluation of the cross-border impacts of nuclear energy. Some plant projects in border regions were abandoned, while existing reactors were subject to more stringent safety regimes.

Twenty-five years later, the fallout from the 2011 Fukushima nuclear disaster caused the likes of Germany to commit to phasing out atomic fuel by 2022. Belgium also just confirmed it will be nuclear-free by 2025.

But a decade on from Japan’s tsunami-induced meltdown, countries from China to France and the United States continue to rely on power generated by nuclear reactors, many of which were constructed in the 1960s and ’70s.

France, the world’s most nuclear-energy dependent country that generates 70% of its electricity from atomic power, confirmed last February that it would extend the life of its 32 oldest nuclear reactors for another 10 years.

Due in part to increasing safety risks with ageing facilities, some are asking if such nations still have the right to make this decision on their own.

When France shut a reactor in February 2020 at its oldest nuclear plant at Fessenheim on the German border due to reported cracks in a reactor cover and other faults, then-German Environment Minister Svenja Schulze affirmed Germany’s wish to influence nuclear policy across the Rhine.

“We won’t let up in our efforts to campaign for a move away from nuclear power in our neighboring countries,” she said, adding that the “nuclear phaseout in Germany is rock solid.”

Who has the power to decide on nuclear?

Though a raft of treaties and agreements lay out minimum consultation requirements between states, there is no framework to specifically consult with local communities across borders that could be most affected by a nuclear accident, noted Behnam Taebi, co-editor of The Ethics of Nuclear Power and professor of energy and climate ethics at Delft University of Technology in the Netherlands.

The 1991 Espoo Convention on Environmental Impact Assessment in a Transboundary Context obliges contracting parties to prevent, reduce and control “adverse” impacts across borders, while the 1998 Aarhus convention applies Principle 10 of the Rio Declaration that states “environmental matters are best handled with the participation of all concerned citizens.”

But according to Taebi, these conventions are about transferring risks between states, and they do not say anything about local communities at the borders of neighboring counties, or whether and how they should be consulted. There is no binding transboundary procedure relating to nuclear energy development, and no framework in place that could, for instance, force France to communicate and consult with towns and cities across the border.

The International Atomic Energy Agency does have guidelines focused on national nuclear energy regulators, Taebi said, however “strictly speaking it’s up to each nation itself on how to decide to move forward.”

For Stefan Kirchner, a research professor of Arctic law at the University of Lapland in Finland, existing international and European treaties facilitate a workable level cross-border consultation.

In a statement to DW, the Organization for Economic Cooperation and Development’s Nuclear Energy Agency (NEA) said global energy authorities, including the World Association of Nuclear Operators, have, in the last decade, created a much higher level of “joint action to assure nuclear safety than ever in the past.”

“A common level of understanding and practice around the world [has] enhanced the ability of all countries to assure high levels of nuclear safety for operating plants, including those considered for long-term operation,” the NEA added.

But in 2018, referring to Germany, the Netherlands and Belgium, the Dutch Safety Board — which independently investigates the causes of incidents or accidents — concluded that cross-border “cooperation has partly been arranged on paper, but that it probably will not run smoothly if a nuclear accident were to occur in reality.”

For 10 years, Austria opposed the Czech Republic’s Temelin nuclear plant that opened in 2000 near its border, with some politicians threatening to block Czech entry into the EU until the latter agreed to tightened safety measures.

While the European Commission stepped in to help resolve that conflict, Kirchner noted that under current agreements, neighboring countries have no power to veto unwanted developments.

According to Behnam Taebi, cross-border consultation is too often limited to national governments because states, rather than communities, are parties of existing conventions.

“Ethically speaking, I’m concerned about not involving local communities in decision-making,” he said. “The least we could do is to engage with other authorities across the border, but also communities, with respect to emergency responses. That is going to be crucial if anything goes wrong.”

Communities that do oppose nuclear plants on their borders are often left to lobby regulators and policy-makers or seek recourse in the EU courts.

In 2016, communities in Germany, Luxembourg, Netherlands and Belgium sent a petition to the European Parliament expressing concern about the safety of the Tihange 2 nuclear plant near Liege after cracks were found in the reactors.

The petitioners were concerned about “the fact that only the relevant country decides about shutting down a nuclear power station.” But the EU disagreed that a shutdown was justified.

A subsequent case in the European Court of Justice brought by activists also failed to shutter Belgian plants that include the Doel reactor near Antwerp.

“The decision to operate a nuclear power plant remains with the Member State, which is also responsible for ensuring its safe operation,” the Commission wrote in 2018.

That decision is playing out with France’s unilateral decision to extend the life of its ageing nuclear infrastructure, and President Emanuel Macron’s recent announcement that France will invest in “groundbreaking” small modular reactors as part of its commitment to reduce CO2 emissions.

Nuclear power generation in France in 2020 in fact dropped to the lowest level since 1995. The nuclear share of France’s electricity mix that year was also the smallest since 1985, according to the 2021 World Nuclear Industry Status Report. The same report showed that renewables are rapidly outpacing nuclear energy, causing the latter’s share of global gross electricity fall from over 17% to around 10% in the last 25 years.

By contrast, the OECD’s Nuclear Energy Agency and the International Energy Agency have reported that the extension or “long term operation” of ageing nuclear fleets is a cost-effective means to reduce greenhouse emissions.

“The continued operation of existing nuclear power plants is one of the most cost-effective investment opportunities for low-carbon generation in many regions,” the NEA told DW in a statement.

But while German Chancellor Olaf Scholz has said he respects the right of France to make nuclear a key part of its climate ambition, his foreign minister, Annalena Baerbock, said Germany would oppose France’s push to have nuclear sanctioned as a “green investment” by the European Commission. The German government remains divided on the EU’s draft energy proposal released on New Year’s Eve.

On Germany’s eastern border, Poland approved the construction of six reactors in two locations in early 2021, including on the Baltic Sea only 150 kilometers (93 miles) from Germany.

“There is a 20% probability that Germany would be affected by an accident at the planned nuclear power plant,” the chairwoman of the Bundestag Committee on the Environment, Sylvia Kotting-Uhl, told DW in May. A “worst-case scenario” would see 1.8 million Germans exposed to radiation, including in the capital, Berlin.

Poland has insisted that the plants will be safe. Despite German protests, few seem willing or able to interfere in the “energy sovereignty” of national states.

And as Stefan Kirchner noted, a lack of veto power for neighboring states means that historic cooperation based on existing treaties and conventions will be the most likely way forward.