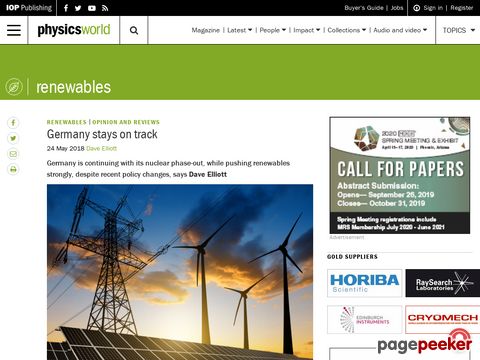 Germany is continuing with its nuclear phase-out, while pushing renewables strongly, with well over 100GW of wind and solar so far. Renewables overall, including hydro and biomass, should soon be supplying nearly 40% of the country’s electricity. That has been helped by the fall in the costs of wind and PV technology and by continued support from consumer self-generation, mainly using PV, and locally owned projects, including wind. For example, the result of the first competitive German onshore wind tender in 2016 had prices ranging between 52 and 58 €/MWh for 807 MW. That’s down from €80/MWh under the the old FiT support system. 65 of the 70 successful projects were community-driven or co-operative schemes.

The fall in prices continued in the next round, hitting a new low at €42.8/MWh average in the second on-shore wind auction, 25% down from the first round. The third 2017 onshore wind contract auction, following the first (0.8 GW) and second (1 GW) rounds, was for 1 GW. It was vastly oversubscribed, with 2.5 GW of bids, leading to even lower winning bids than in previous rounds, with an €38/MWh average. The lowest bid was at €22/MWh.

Germany plans to allocate support for 2.8 GW of new onshore wind projects annually through tenders up to 2019, followed by an annual 2.9 GW from 2020 on and it is now pushing ahead with offshore wind, with over 5 GW so far in place. PV solar has also been steadily increasing, up from 42 GW in 2017, though wind still leads, passing 50 GW in 2017.

Public support remains very high. In a poll, 95% of the sample saw expansion of renewables as important or extremely important – up from 93% in 2016. But there are still some big policy issues. While renewables are growing, so has coal use. Although national-level use of energy from coal is now falling, gas imports are rising, with Russia keen to help.

Gas plants can be used to balance variable renewables, so there is a case for them, but there is a push towards the use of green gas, generated from wastes or via Power to Gas conversion of surplus renewable electricity. With CCS all but abandoned, the continued use of carbon-intense coal is much more provocative, given Germany’s climate protection ambitions. However, it is lucrative. With renewables taking some of the market, Germany now has regular surpluses of power, despite the phase-out of nuclear, and that surplus, mostly in effect from coal plants, is being exported very profitably. Coal use is being fought by environmentalists, and indeed was a key issue in the initial phase of the post-election negotiations, with the Greens requiring action on it as the price of their membership of a coalition with Merkel. Sadly, that didn’t work out. Phasing out coal use and coal mining is certainly a tough call, although it is happening.

However, despite these setbacks, it does not seem to be the case, as some insist, that Germany is replacing nuclear with coal, so that emissions are rising. The 2017 World Nuclear Industry Status report notes that, between 2010, the last year prior to the post-3/11 shutdown of the eight oldest nuclear plants, and 2016, ‘the increase of renewable electricity generation (+84.4 TWh) and the noticeable reduction in domestic consumption (–20.6 TWh) were more than sufficient to compensate the planned reduction of nuclear generation (–56 TWh), enabling also a slight reduction in power generation from fossil fuels (–13 TWh) and a threefold increase in net exports’.

Though it is the case that German emissions have been growing slightly, that’s mainly due to increases from transport. That clearly needs attention. Electric vehicles are beginning to be popular in Germany, as elsewhere, and that may help – perhaps using some of the surplus renewable power from wind at night-time. However, some of that could also be used for other purposes. For example, Siemens Gamesa Renewable Energy is developing the use of power from wind turbines to heat rockfill for heat storage at 600 °C. A steam turbine then runs a generator, converting the heat back into electricity. Its first full scale FES ‘Future Energy System’ project at the Trimet SE aluminum smelter site in Hamburg-Altenwerder will have 1,000 tonnes of rockfill which, when heated, would provide 30 MWh via a 1.5 MW generator.

Storage is clearly a key new issue. A 200 MW rated pumped hydro storage system is to be developed using an old coal mine in Germany. And another novel approach goes beyond conventional compressed air storage in caverns and uses large hollow concrete spheres mounted on the seabed, with excess power from offshore wind turbines used to pump water out of them. When power is needed, water is allowed back in, and it will be at high pressure, given the deep water siting, driving a separate turbine generator. But the big storage option may be Power to Gas (P2G), using surplus electricity from wind and PV to make storable hydrogen gas by the electrolysis of water, to be used to make power again when wind and solar inputs are low and demand high. There are many projects underway. DENA, the German Energy Agency, wants there to be 1 GW of P2G capacity in place by 2022.

So the German Energiewende programme continues, with new ideas constantly emerging. This is despite a degree of retrenchment on the policy side – a renewables slowdown. Germany is phasing out FiTs in favour of competitive auctions, ostensibly in the belief that they will cut costs. Although costs are falling, the FiT cuts will impact on PV especially, including prosumer projects. There have also been attempts to limit support for citizen-based wind power development, so as to cut costs. For the 2018 wind auction round, the rules were revised to limit citizen-based projects. In earlier rounds they could bid for projects as yet without permits and were given up to 4.5 years before start-up, as opposed to 2.5 years for commercial projects. They were also automatically awarded the highest winning auction bid. Unsurprisingly, they did well, but in the next rounds, these privileges were removed. As a result, in the February 2018 auction round, of the 83 winning projects, only 19 (22%) were citizen energy initiatives, a big drop from the 98% in the previous round in November, in which 61 projects got through. That change has pushed the average winning wind contract prices up to €46/MWh.

Opponents of these market-oriented policies say that they may well cut the cost to consumers (compared with FiTs), but may push up overall costs and slow the building up of capacity. However, it is complicated. The technology is getting cheaper. You could say that the FiTs in Germany and elsewhere had in fact done their job, building a market so that prices fell – so they were no longer needed. But the drastic FiT cut-backs, mirrored across the EU, seem to have been more about slowing down the rapid growth of renewables, PV especially, which otherwise some governments evidently felt would get out of control, imposing unacceptable costs on consumers. Either way PV growth looks likely to be less than it would have been, and the same for wind. Certainly, although growth continues, the overall rate of renewables growth in Germany does seem to have fallen, with the funding cuts being at least partly responsible. Last year, investment in clean energy fell by 26%. So there have been fears that Germany might not reach its climate targets, and calls for it to change tack.

What does not seem to be in contention is the nuclear phase-out. With Gundremmingen B now closed, there are 7 plants left – all to go by 2022. But some nuclear plants are meanwhile trying to ramp up and down to stay in the game i.e. by offering balancing services. Though that can have its problems.

With renewables expanding, there is no shortage of issues – upgrading grids to help with balancing being key, especially given local opposition to new lines. Although some bold plans are still going ahead. There are limits being imposed on biomass use, but renewables supplied over 36% of annual electricity needs in 2017, 40% of it from wind, 36% from biosources.

However, some worrying policy changes emerged from the final phase of the horse trading on a new Christian Union and Social Democrat coalition. Nevertheless, while it was accepted that the 2020 climate target might be missed, under the proposed deal, the 2030 target will stay, with the renewable electricity target to be raised from 50% to 65%. That seems likely to put a squeeze on coal.

And so the longer-term target of getting to 80% of electricity from renewables by 2050 still seems realistic, though that, and even more so, the 60% by 2050 energy target, with energy use cut by 50%, will take some fighting for. Certainly transport is a key sector as is heat, and coal is still an important issue. Even so, the latest overall emission figures look good – a 0.5% fall.

For an analysis of the German Energiewende see this book on Conceptualizing Germany’s Energy Transition. It’s all a world away from what’s happening in the US – see my next post.

Dave Elliott is emeritus professor of technology policy at the Open University, UK, and writes a regular column for Physics World on sustainable energy technologies