Expert warns of ’global’ consequences unless the plant is treated properly 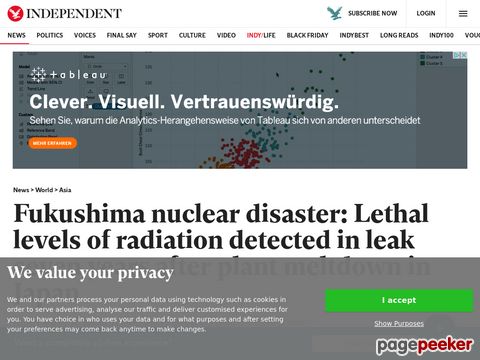 Lethal levels of radiation have been detected at Japan’s Fukushima nuclear power plant, seven years after it was destroyed by an earthquake and tsunami.

The Tokyo Electric Power Company (Tepco), which operated the complex and is now responsible for its clean up, made the discovery in a reactor containment vessel last month.

The energy firm found eight sieverts per hour of radiation, while 42 units were also detected outside its foundations.

A sievert is defined as the probability of cancer induction and genetic damage from exposure to a dose of radiation, by the International Commission on Radiological Protection (ICRP). One sievert is thought to carry with it a 5.5 per cent chance of eventually developing cancer.

Experts told Japanese state broadcaster NHK World that exposure to that volume of radiation for just an hour could kill, while another warned the leaks could lead to a “global” catastrophe if not tackled properly.

It came as Tepco said the problem of contaminated water pooled around the plants three reactors that is seeping into the ground has caused a major headache in its efforts to decommission the plant.

Thousands of workers have been hired by the company to as it attempts to secure the plant, which was the scene of the most serious nuclear accident since Chernobyl in 1986.

Three of its reactors went into a meltdown after the earthquake and tsunami which killed at least 15,000 people.

Tepco has admitted that it could be until 2020 until the contamination issue is resolved. Only then can it move onto the second stage of removing nuclear debris at the site, including the damaged reactors.

Richard Black, director of the Energy and Climate Intelligence Unit, said the high levels of radiation found in and around the reactor last month were “expected” and unlikely to pose a danger.

He told The Independent: “Although the radiation levels identified are high, a threat to human health is very unlikely because apart from workers at the site, no-one goes there.

“The high readings from fuel debris would be expected – the higher reading from the foundations, if confirmed, would be more of a concern as the cause is at present unclear. But as officials indicate, it might not be a genuine reading anyway.

“What this does demonstrate is that, seven years after the disaster, cleaning up the Fukushima site remains a massive challenge – and one that we’re going to be reading about for decades, never mind years.”

But Mycle Schneider, an independent energy consultant and lead author of the World Nuclear Industry Status Report, said that Tepco “hasn’t a clue what it is doing” in its job to decommission the plant.

He added that the contaminated water that is leaking at the site could end up in the ocean if the ongoing treatment project fails and cause a “global” disaster, he told The Independent.

“Finding high readings in the reactor is normal, it’s where the molten fuel is, it would be bizarre if it wasn’t," he said.

Mr Schneider added that the radiation leaks coupled with the waste from the plant stored in an “inappropriate” way in tanks could have global consequences.

“This is an area of the planet that gets hit by tornadoes and all kinds of heavy weather patterns, which is a problem. When you have waste stored above ground in inappropriate ways, it can get washed out and you can get contamination all over the place.

“This can get problematic anytime, if it contaminates the ocean there is no local contamination, the ocean is global, so anything that goes into the ocean goes to everyone.”

He added: "It needs to be clear that this problem is not gone, this is not just a local problem. It’s a very major thing.”

The Independent contacted Tepco for comment, but the energy giant had not responded at the time of publication.