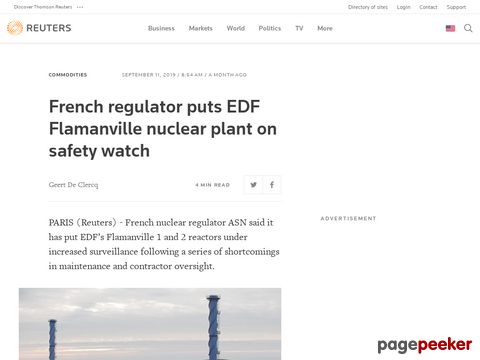 The ASN’s action is the latest in a long series of technical and operational issues that have bedevilled EDF in recent months and raised new concerns about the state-controlled utility’s safety culture.

The regulator said in a statement there had been a high number of significant shortcomings in the Flamanville plant’s maintenance and in the oversight of contractors in the plant, as well as insufficient quality of documentation. It added that it had summoned the plant’s director and ordered him to submit an action plan to improve plant operation.

EDF did not dispute the ASN’s ruling.

“We accept the ASN’s diagnosis and we accept its decision. That is why we submitted an action plan in August to resolve the problems,” an EDF spokesman said.

EDF’s Belleville nuclear plant on the Loire river has also been under increased surveillance since 2017.

The problems at the Flamanville 1 and 2 reactors are not directly related to the many problems with a third nuclear reactor that EDF is building on the same site. Flamanville 3 is a decade behind schedule and its cost has tripled to nearly 11 billion euros and is likely to rise further.

Separately, EDF said on Tuesday it had found problems with weldings on the steam generators of some existing reactors, sending its shares down 6.8% on fears that the faults could lead to reactor closures.

The shares recovered some of the losses to rise 5% on Wednesday. They are down 28% over the past 12 months, making EDF the second-worst performer in the Stoxx European Utilities index

“There is a chain of control from reactor builder Framatome, to nuclear plant operator EDF and regulator ASN, but it has been demonstrated over and over again that this chain of control is malfunctioning. Every few months there is a new problem,” World Nuclear Industry Status Report author Mycle Schneider said.

Schneider said there had been no follow-up to a 2018 French parliament investigation into nuclear safety and security.

A parliament report published in July 2018 concluded that France’s nuclear plants are a safety threat because of their excessive reliance on outsourcing, the risk of terror attacks and a lack of operational rigor.

Unlike the US, Russia and Japan, France has had no major nuclear accidents such as Three Mile Island, Chernobyl or Fukushima and its regulator ASN is seen as independent.

But EDF’s long series of problems - both at its existing fleet of 58 nuclear reactors and at the EPR reactors under construction in Flamanville and in Olkiluoto, Finland - have tarnished EDF’s image as a leader in nuclear technology and weighed on its ability to sell nuclear plants abroad.

While Russian rival Rosatom has a $133 billion order book for reactors worldwide, EDF’s only foreign project is for two EPR reactors at Britain’s Hinkley Point, in a contract with its own UK arm, EDF Energy.

“Sometimes there are weak signals, but we are putting in place procedures. Safety is our number one concern, it is in our DNA,” the EDF spokesman said.