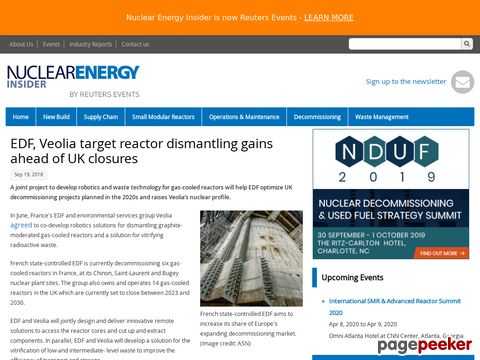 EDF and Veolia will jointly design and deliver innovative remote solutions to access the reactor cores and cut up and extract components. In parallel, EDF and Veolia will develop a solution for the vitrification of low-and intermediate- level waste to improve the efficiency of transport and storage.

In May, EDF’s decommissioning subsidiary Cyclife signed a partnership with Finland’s Fortum to jointly-develop services in nuclear decommissioning and waste management, focusing on the Nordic region.

For Veolia, the partnership with EDF offers a key opportunity to deploy its technology in the growing nuclear decommissioning market. The partnership builds on Veolia’s acquisition in 2016 of Kurion, a U.S.-based nuclear decommissioning services company which helped to stabilize Japan’s Fukushima Daiichi reactor following the nuclear accident in 2011. In June, Veolia entered the Canadian nuclear market after it was selected to design, fabricate, and commission a remote waste access and conditioning system in Manitoba.

EDF’s Chinon decommissioning project in western France represents a “pilot” project for the group’s gas-cooled reactor plans. The 200 MW Chinon A2 unit will be the first gas-cooled reactor to be decommissioned. The dismantling of non-nuclear parts and auxiliary installations in the reactor building is scheduled to be completed by 2030 and full site cleanup is scheduled to be completed by 2055, assuming the schedule is agreed by ASN, France’s nuclear safety authority.

After Chinon is decommissioned, the process will be initiated on the other five French gas-cooled reactors.

Westinghouse, the turnkey contractor for the reactor dismantling at Chooz A, is using a robot called ‘Predator’ to segment 25,000 bricks in the reactor vessel.

Scheduled for completion by 2022, the Chooz A project has helped EDF set out a tooling strategy, demonstrating the cost benefits of developing new tools versus procuring existing tools, Guilhelm Le Roy, Chief Technology Officer at Cyclife, told a conference in May.

Cyclife also plans to build an industrial-sized demonstrator near Chinon which will test and qualify decommissioning tools and different project scenarios, Roy said. Digital modelling will be used with the demonstrator to optimize decommissioning strategies for other reactors.

Other learnings from the Chinon, St Laurent, and Bugey projects have included best practice for working with alpha-contaminated waste and in asbestos conditions, Le Roy said.

“The safety authorities in France are very focused on these two issues,” he noted.

Nuclear operators look to minimize the duration of fuel transfer activities due to the high labor costs associated with monitoring and handling radioactive materials.

Through their partnership, EDF and Veolia will develop a solution for the vitrification of low- and intermediate- level waste using Veolia’s GeoMelt technology. This technology immobilises radioactive waste in a glass matrix, creating a stable and durable waste form which can be transferred and stored.

The partnership will expand the application of the waste vitrification technology to a wider category of nuclear waste, Tancrede Fulop, equity analyst at Morningstar, told Nuclear Energy Insider.

Veolia could gain much more from the partnership than EDF. By deploying its technology on major commercial projects, Veolia will increase its chances of winning new contracts, Fulop noted.

"Veolia will certainly use what they gain from the EDF partnership,” Fulop said.

EDF’s decommissioning sector growth— and its learnings from the scaling up of activities— will depend somewhat on French government policy.

EDF will gain further decommissioning learnings when it closes its two Fessenheim PWRs in 2020 but these numbers are small when compared with Germany, for example, where 10 reactors have closed since 2011 and a further eight reactors will be closed in 2019-2022.

The outlook for EDF’s French PWR fleet could become clearer this fall when the government unveils its long-awaited multi-year energy policy roadmap. The roadmap is expected to provide more detail on planned nuclear closures.

The sudden resignation of France’s environment minister on August 28 could signal EDF’s French nuclear plants may operate longer than previously expected. Nicolas Hulot, a long-term green campaigner and nuclear power sceptic, resigned from his post in a radio interview, citing frustration at the “small steps” being taken to tackle climate change.

His replacement, Francois de Rugy, warned September 10 that France’s nuclear generation strategy should be based on data rather than any industry allegiances.

“The important thing is to know the economic data for both nuclear and renewable energies,” he told Le Monde newspaper.