Although France plans to invest in small modular nuclear reactors, experts doubt that this is ecologically and economically sensible. Yet it may be more about geopolitical strategy than energy. 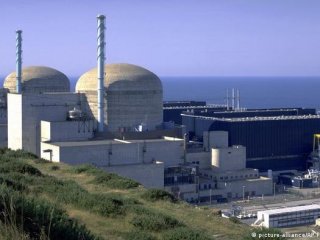 In the wake of the disaster at nuclear power plant Fukushima Daiichi 10 years ago, numerous countries have reviewed their stance on nuclear energy. A tsunami had hit the coast of Japan and flooded the power station, triggering several nuclear meltdowns.

Germany, for example, subsequently decided to bring forward its planned nuclear phaseout to 2022. In Italy, 95% of the population voted in a referendum against a return to nuclear power.

Meanwhile, countries such as Finland, the United States, Russia and France have kept their nuclear plants online, and even decided to expand in recent years.

A French law says the country will have to reduce its share of nuclear energy from currently roughly 70% — the highest in the world — to 50% in 2035, a goal President Emmanuel Macron has in the past called unrealistic.

But in pursuing small modular reactors (SMRs), some experts believe France may have a hidden agenda.

Recently, the president announced plans to invest in so-called small modular reactors (SMRs) “to lead the sector with groundbreaking innovations.” The new reactors are ostensibly to help France reduce its CO2 emissions.

The announcement came when Macron unveiled his France 2030 investment strategy of €30 billion ($35 billion) at the Elysee Palace.

“We have a decisive competitive advantage — our historical model, the existing nuclear power plants,” the president said during the ceremony.

The strategy allocates €8 billion to the development of hydrogen power and only €1 billion to SMRs, yet Macron declared the plans to develop the small plants “goal No. 1.”

The country’s SMRs will have a capacity of 50 megawatts to 500 MW each – considerably less than France’s current reactors with their capacity of up to 1,450 MW. SMRs are to be built in clusters to increase sites’ total capacity.

But nuclear champion France is not the frontrunner in the SMR race — the US is. Portland-based startup NuScale Power is the world’s first company to have its SMR design approved, and is planning on completing a first 60 MW plant in 2027. And Russia’s public company Rosatom is aiming for a first SMR on land in 2028 in the northeastern province of Sakha.

France ’can take the lead’ in SMR sector

France’s first demonstration plant is only scheduled to be completed in 2030.

And yet, Nicolas Mazzucchi, of the Paris-based Foundation for Strategic Research, thinks the country could take the lead in the sector.

“We have the necessary know-how, and if the private sector now jumps in to invest, we can certainly aim for serial production in 2030,” he told DW.

Mazzucchi thinks nuclear power should continue to be part of France’s energy mix.

“This type of energy is stable and predictable — unlike certain renewables, such as wind energy. And existing nuclear power plants hardly produce any CO2,” he added.

He added that the risk of a nuclear incident was very low, especially in France, as the industry is closely monitored. He also said that the country had the necessary expertise to deal with nuclear waste, which continues to emit radiation for thousands of years.

A discussion based on ’hot air’

But Mycle Schneider thinks nuclear energy is inefficient in the fight against the climate emergency — “too expensive, too slow,” he says. He’s the editor of the annual World Nuclear Industry Status Report (WNISR), which assesses trends in the global nuclear power industry.

“The discussion around SMRs is orchestrated hot air and has become hugely hyped,” he explained to DW.

“Last year, more than 250 GW of renewable energy capacity has been added to the grid and only 0.4 GW of net nuclear capacity — nuclear power has become irrelevant,” he asserted.

Schneider says nuclear power plants only appear to be more reliable than renewables: “France’s nuclear reactors, on average, had to be switched off during one-third of the time in 2020, mostly due to maintenance, also as they now have been running for a long time, on average more than 35 years.”

He added that renewables had to be seen as a bouquet of different energies. Through demand response management, one type of energy could offset the temporary unavailability of the other. Environmentalists also often point out that construction of nuclear power plants has a significant carbon footprint.

“It takes ages to build new nuclear power plants,” Schneider added. French utility EDF and Siemens started to develop EPRs, a third-generation pressurised water reactor design, after the Chernobyl nuclear catastrophe in 1986, he explained. “And 35 years on, there’s still no EPR in Europe up and running.”

EDF is building a 1.6 GW EPR in Flamanville in northern France. But constructing the plant will exceed €11 billion, instead of the initially planned €3.3 billion, and the EPR is only scheduled to be completed next year — 10 years later than initially intended.

Such delays have Kenneth Gillingham, a professor of environmental and energy economics at Yale University in the US, wondering if investing in nuclear makes economic sense.

“The safety requirement for new nuclear plants are that strict, that constructing them becomes very costly and capital-intensive,” he told DW.

“I don’t really see why you would spend money on SMRs, especially as you don’t know if they will work in the end,” he said.

Philip Johnstone, a research fellow at the University of Sussex School of Business in southern England, thinks that SMRs turn the logic of economies of scale on its head.

Ulterior motives behind investment in SMRs

“We were told all along that building bigger nuclear plants would help us save money through the scale effect, and now it’s supposed to suddenly work the other way around?” Johnstone told DW.

He believes that France has other reasons for continuing to invest in nuclear energy.

“Countries that are clinging on to nuclear power are often nuclear weapon states — such as the UK, the US and France,” he explained, and pointed to a speech by Macron in December 2020.

“The investment in SMRs seems first and foremost a strategic decision, even though it means wasting a lot of time and money,” Johnstone said.

Time and money that could instead be more effectively invested in climate protection.

According to the United Nations, global CO2 emissions will need to be reduced by more than 7% percent each year until 2030 — based on the year 2019 — to limit global warming to 1.5 degrees Celsius (2.7 degrees Fahrenheit).