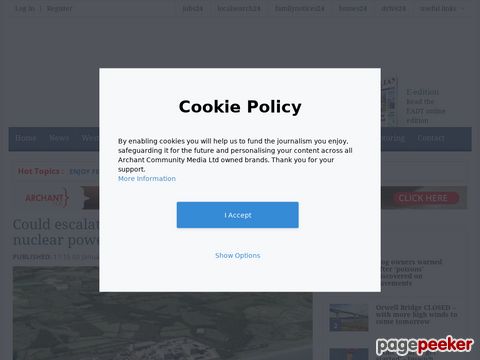 An artist’s impression of what Sizewell C would look like Picture: EDF

“The growing cost of nuclear power could mean ’game over’ for Sizewell C, experts claim.”

While much of the debate in Suffolk around EDF Energy’s proposals have focussed on the local impacts, recent reports from energy forums have started to question how viable the industry is for the UK - and globally.

At a recent debate, Paul Dorfman of the University College London’s Energy Institute went head to head with Paul Spence, director of strategy and corporate affairs at EDF to discuss the future of the sector.

Dr Dorfman, who also founded the Nuclear Consulting Forum, said the “massive cost escalations” of nuclear power together with the increasing competiveness of renewables meant there was “little rationale for new nuclear builds”.

Costs for offshore wind have plummeted to around £40 per MWh - making it now one of the cheapest forms of power available.

Meanwhile, the costs government agreed to pay EDF for Hinkley Point C, is more than twice as expensive at £92.50 per MWh.

The latest World Nuclear Industry Status Report warned of “substantial challenges” and a decline in usage, with fewer reactors in operation today than 30 years ago.

Globally, while investment in renewables has increased to around $350bn per year, nuclear fell to just $17bn. Dr Dorfman said: “In this context, nuclear power at the expense of more flexible, safe, productive, cost-effective and affordable technologies really does seem to be rather foolish.”

He said it could mean “game over” for nuclear projects, including Sizewell.

EDF insists, however, that nuclear is the only proven and large scale way to generate constant low carbon energy in the UK - and Sizewell C is essential to meet the nation’s low emission targets.

Although its sister project in Somerset, Hinkley Point C, has seen costs escalate from an estimated £4bn in 2008 to more than £20bn in the latest financial report, EDF claims Sizewell would benefit from the “advantages of replication”.

“In the UK a very simple principle can reduce risk in nuclear new build and bring in cheaper finance,” a spokesman said. “It is to copy as faithfully as possible a design that has already been approved and is under construction. Builders know exactly what needs to be done, how to do it and have a much clearer idea of the cost. Restarting an industry and building the first of a UK-adapted design is challenging.”

EDF said replicating at Sizewell would be “less risky” than “abandoning something because the first was difficult to do and to hope new, unproven and uncosted technologies will save the day”.

It added that the reduced risk meant Sizewell could benefit from a new funding model to cut costs to consumers.

The government consulted earlier this year on the “Regulated Asset Base model”, which is intended to incentivise private investment in public projects by guaranteeing a return for developers. It would mean developers can raise revenue, potentially though customer bills, and reduces their risk.

Greg Clark, who was business secretary at the time, said: “If new nuclear is to be successful in a more competitive energy market - which I very much believe it can be - it is clear that we need to consider a new approach to financing future projects, including those at Sizewell and Bradwell.”

But although EDF claims RAB could save money for consumers - critics say it merely leaves the public with all the risk.

“Under RAB, the plan is for the burden of risk to pass to hard-pressed UK consumers and/or taxpayers labouring under post-Brexit conditions,” said Dr Dorfman.

"Not only that, but the revenue stream will include a variable strike price - with taxpayers and/or electricity consumers forced to write, what is essentially, a ’blank cheque’.

Earlier this year it was reported a “Sizewell surcharge” could add £6 to annual energy bills under the RAB model. A petition opposing the surcharge was signed by more than 36,000 people.

Concerns were further compounded by EDF’s precarious financial position. The company is €37.4billion net debt and its stock lost 34% of its value this year.

Professor Steve Thomas, a researcher in energy policy at the University of Greenwich, questioned the company’s credentials ahead of a seminar organised by the Nuclear Free Local Authorities in Colchester last month.

“EDF is in deep financial crisis and will only be able to survive with heavy French government support and radical restructuring,” he said. “It is unclear how EDF will be able to finance Hinkley Point C, much less Sizewell C, and the UK government must resist pressures to throw more public money at these ill-conceived projects and abandon them now.”

Lord Deben, former secretary of state for the environment, said he was sceptical about the costs “because in the end the public are going to have to pay for this”.