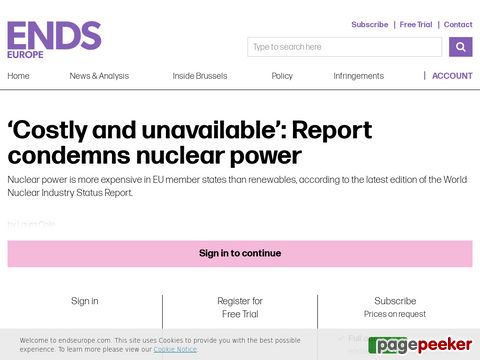 Nuclear power is more expensive in EU member states than renewables, according to the latest edition of the World Nuclear Industry Status Report.

One of the report’s key findings was that switching to nuclear power would emit more carbon per year than renewables because the plants take between five and 17 years longer to build than utility-scale solar or onshore wind power.

“Protecting climate requires avoiding the most carbon at the least cost,” said expert Amory Lovins, an energy expert who contributed to the report.

The report also focused on the “unavailability” of nuclear energy, when reactors generated no electricity due to maintenance works or technical problems. Sector expert Mycle Schneider calculated that, in France, nuclear reactors were out of action for an average of 87.6 days in 2018.

The lawmaker said the “unique document”, which is supported by Greens-EFA Group, “debunks common myths” about nuclear power by looking at the cost and reliability of the technology compared to renewables.

The figures were worse in Belgium, where the nation’s seven reactors generated no power for an average of 180 days in 2018 – or half a year. Schneider described the findings as “stunning”.

“Intermittency is an argument often used against renewables,” he said. “It turns out nuclear is as intermittent as other electricity generation methods – it’s just a different form of intermittency”.

Though a world report, the study calculated that for the EU, 95% of added power generation capacity in 2018 came from wind, solar and biomass. Meanwhile, nuclear power generation declined. “Renewables are growing faster than nuclear did even in its heyday in the 1980s,” said Lovins.

For Paulus, the report “makes one wonder why, in the EU, the strongest push for new nuclear energy comes from countries which actually could least afford it”.

Currently, some member states plan to use nuclear power as part of a decarbonised energy mix. In December, negotiators came to a compromise over whether the technology should be included in proposed green finance taxonomy, where it will be regarded as a transitional activity, while the European Commission runs a ‘no-harm’ test on its long-term environmental impact.