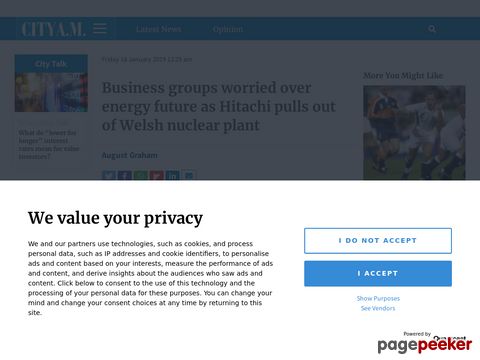 Business groups were left exasperated yesterday as another core investor pulled its support from the UK nuclear sector, denting the government’s energy plans.

Japanese giant Hitachi said it would suspend work on the £16bn Wylfa nuclear power plant which was intended to produce six per cent of the UK’s electricity.

Protracted discussions with the government, and a “generous” offer to guarantee Hitachi would get £75 per megawatt, was not enough to save the plant, energy secretary Greg Clark told parliament.

“I am very sorry to say that despite the best efforts of everyone involved we’ve not been able to reach an agreement to the satisfaction of all concerned,” said Duncan Hawthorne, the chief executive of Hitachi subsidiary Horizon Nuclear Power.

The news, which comes after Toshiba pulled out of construction on the Moorside plant in Cumbria, cemented worries among business groups.

“As the second cancellation of funding for a new nuclear plant in as many months, it leaves in doubt the UK’s ability to replace its existing nuclear fleet,” Matthew Fell from the Confederation of British Industry said.

“Nuclear power is a vital part of our energy mix, and new projects are needed to secure our future low-carbon, mixed energy supply.”

The decision will hit workers in Anglesey, where 10,000 jobs were expected at its peak during construction. The British Chambers of Commerce said the decision was “devastating” for north Wales and the region.

Local businesses which have spent time and resources to become part of the Wylfa supply chain will also face problems, the chamber said.

“This latest announcement will add further to their jitters regarding the security of our future energy supply,” said Edwin Morgan, director of policy at the Institute of Directors.

Mycle Schneider, a Paris-based consultant and lead-author of the World Nuclear Industry Status Report, said that UK wind and solar output tripled output between 2012 and 2017, adding 40 terawatt hours of energy – almost twice the amount expected to be generated at Wylfa.

“There has been a dramatic decline in the cost of renewables. Even five years ago people argued that we need natural gas as a bridging technology, but not anymore,” he said.

Energy secretary Greg Clark struck a similar note, telling parliament that the “economics of the energy market have changed significantly in recent years.”

Jonathan Marshall, head of analysis at the Energy and Climate Intelligence Unit, said that the government is slowly moving away from plans to rely on nuclear power to reach carbon emissions targets.