Naoto Kan, Japan’s former prime minister, was devoted to the idea of nuclear power. But after his country’s nuclear disaster in 2011, he turned into an improbable activist against atomic energy. Can he persuade the pro-nuke French? 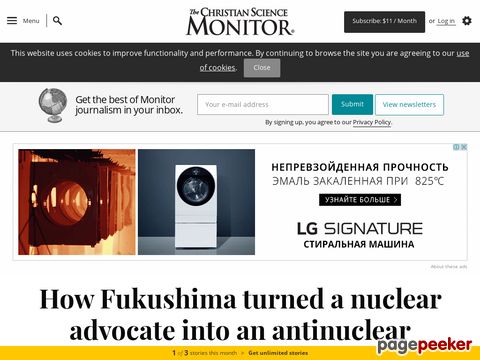 Source : How Fukushima turned a nuclear advocate into an antinuclear champion https://www.csmonitor.com/World/Europe/2018/0411/How-Fukushima-turned-a-nuclear-advocate-into-an-antinuclear-champion

Naoto Kan came to France anyway. The once pro-nuclear former prime minister who led Japan through the Fukushima nuclear disaster recently made a swing through one of France’s most nuclearized areas – the tip of Normandy – giving struggling environmentalists a rare boost.

An improbable activist in his conservative dark suit and tie, Mr. Kan came to explain his 180-degree switch from pro-nuclear to antinuclear crusader, and urge people to go for renewables instead.

“I came here because I am fiercely opposed to nuclear power, and I want to show my solidarity with people fighting it here,” Kan politely told a small crowd of activists near Flamanville’s controversial EPR nuclear reactor. “Before Fukushima I was pronuclear,” he said, laying flowers on a homemade memorial to unknown radiation victims whose slogan, “aux irradiés inconnus,” mimics monuments to unknown soldiers dotting France. “But with Fukushima, we almost had to evacuate millions of people, and I realized we had to stop nuclear power – in France, Japan, the world – and turn to renewables as fast as possible.”

Kan’s unusual visit buoyed “écolos” in rural Normandy, where the nuclear industry employs thousands and its critics feel marginalized. “We’re used to criticism, but his message is universal, so he gives the opposition credibility,” said retired schoolteacher and veteran activist Paulette Anger, secretary of Crilan, one of two small anti-nuclear groups hosting Kan.

How to produce electricity safely is a quandary many countries have grappled with since the Fukushima Daiichi disaster – the planet’s second major nuclear accident after the 1986 Chernobyl catastrophe. It’s a question Kan never thought he’d face when he became prime minister of Japan on June 8, 2010.

Kan was a science buff who thought nuclear power was needed in a plugged-in world. After majoring in applied physics at the Tokyo Institute of Technology, he was drawn to ’60s activism, and then entered politics.

Kan followed with dread as the power loss halted cooling to the nuclear fuel rods in the reactors and spent fuel pools. The failure of all backup fixes inexorably led to three meltdowns and several hydrogen explosions, spewing long-lived radioactive poisons across the countryside.

“Human error is inevitable,” Kan told a rapt crowd of 400, packed into a community center near Flamanville’s village church. Because a nuclear accident robs people of their lives and ancestral lands, the risk is too high, Kan said in guttural Japanese, pausing for his translator to catch up. “So I’m trying to use this terrible experience to convince as many people as I can to get out of nuclear power.”

For his antinuclear hosts, Kan was the biggest guest star since oceanographer Jacques-Yves Cousteau came to fight the Flamanville reactors decades ago.

“It’s remarkable to have the former prime minister here,” said retired schoolteacher and antinuclear veteran Didier Anger, president of Crilan and a spokesman for Can-Ouest, the two antinuclear groups co-hosting Kan. “When someone changes their mind as Mr. Naoto Kan has, bravo!” he said to resounding applause.

A fictionalized film of the disaster’s first days accompanied Kan. “Le Couvercle du Soleil” (“The Seal of the Sun”), produced by Tomiyoshi Tachibana, shows the besieged prime minister struggling to understand the problem so he can react without causing panic. The secretive fictional power company lies and stalls. A chain of errors leads to disaster. In a key turning point, radiation levels in the doomed plants get so high the power company wants to leave. In what investigators conclude “saves Japan,” Kan orders them to stay.

An earthquake and tsunami are catastrophes that end, Kan explains in his book, “My Nuclear Nightmare.” But leaving an unmanageable nuclear reactor alone only lets things get worse.

The disaster released massive amounts of radiation, created 160,000 refugees, drove farmers to suicide, and rendered a beautiful part of Japan uninhabitable for years. After a no-confidence vote, Kan resigned, but not before insisting on legislation easing Japan’s path to renewables.

Chernobyl got explained away as an accident in an old reactor in an undeveloped nation. For Kan, Fukushima underscored the false assumption that nuclear disaster can’t happen in a high-tech country. By luck, he didn’t have to order Tokyo and 50 million people evacuated for 30 to 50 years, he said.

Now, Kan travels the world as a guest of antinuclear groups, warning about the powerful collection of special interests promoting nuclear power.

“Those who benefit from nuclear power are not the ones who will pay,” he warned, noting that the half-life of plutonium is 24,000 years. Fukushima, he stressed, is not over.

After speaking to the National Assembly in Paris and the European Parliament in Strasbourg, Kan toured Normandy’s “nuclear peninsula.” Activists took Kan along the rugged coast to view Flamanville’s controversial EPR reactor from a cliff. They drove him past France’s oldest nuclear waste dump to the huge La Hague nuclear waste reprocessing plant, home of Europe’s largest store of nuclear materials, tons of plutonium, and thousands of tons of nuclear waste. A citizen scientist from the independent radiation lab ACRO showed Kan two contaminated streams amid bucolic cow pastures behind the nuclear waste plant, including one where authorities last year confirmed plutonium in sediments. Kan admired the grand view at the peninsula’s jagged tip, where the waste plant’s discharge pipe routinely pours thousands of gallons of radioactive wastewater out to sea with government permission.

After the disaster, Japan shut down its 54 nuclear reactors, 12 of them permanently. Five restarted, but efforts to restart more are stalled by public opposition. Kan wants them all shut down.

Fukushima had a profound effect on global nuclear programs, said Mycle Schneider, a Paris-based independent energy and nuclear policy analyst and lead author of the World Nuclear Industry Status Report. “It accelerated its decline in Europe, the US, globally – and significantly slowed down expansion in China.”

Flamanville’s Mayor Patrick Fauchon echoed the French industry view that its plants are safe. “I think it’s important that he share his experience,” he said of Kan. “But it’s his fight.” As for a nuclear accident here: “I’m not particularly worried.”

“It probably won’t change opinions on the pronuclear side,” Ms. Anger said. “But because he lived through certain things and was once pronuclear, it made them think. His visit enormously enhanced our credibility. It was a big event.”